As experts from the National Hurricane Center surveyed the Gulf of Mexico early last week, they saw in Laura the makings of a Category 1 storm – considered dangerous but not likely to cause major damage. Within 24 hours, however, the storm became something unrecognizable, morphing into a Category 4 hurricane with windspeeds approaching 240 kilometers per hour – nearly a Category 5, the worst there is. 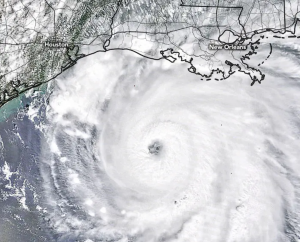 Hurricane Laura off the coasts of Louisiana and Texas on August 26. Credit: NASA

As experts from the National Hurricane Center surveyed the Gulf of Mexico early last week, they saw in Laura the makings of a Category 1 storm – considered dangerous but not likely to cause major damage. Within 24 hours, however, the storm became something unrecognizable, morphing into a Category 4 hurricane with windspeeds approaching 240 kilometers per hour – nearly a Category 5, the worst there is.

It was one of the fastest transitions of a storm from bad to much, much worse ever recorded in the Gulf of Mexico. Hurricane Laura made landfall in the predawn hours of August 27, nearly leveling Lake Charles, Louisiana, to the West of New Orleans, and forcing the evacuation of more than a half a million people.

That’s bad news during what’s proving to be one of the busiest hurricane seasons on record. The National Oceanographic and Atmospheric Administration said in early August that the 2020 Atlantic hurricane season could see as many as 25 named storms before October 1st, when the season ends – the busiest the agency has ever predicted. Laura was number 13.

Add to that a 2020 study by the University of Wisconsin, in conjunction with NOAA, finding that storms have reached major hurricane status – Category 3 or above with sustained winds of 177 kilometers per hour or higher – more and more often over the last 40 years. The year before, a study in the journal Nature documented a trend toward more rapidly intensifying hurricanes in the Atlantic Ocean between 1982 and 2009, and used a model that determined it would have been unlikely without human-made climate change.

The speed with which tropical storms can transform into hurricanes is complicating both weather forecasting and emergency response.

“The problem is, several days out, people are tuning in, saying, ‘It’s a Cat 1, Cat 2, been through those, know what to do, not that bad,’” Craig Fugate, who headed the Federal Emergency Management Agency during the Obama administration, told the Washington Post. “Then it starts intensifying and the window to evacuate closes very quickly.”

The forces driving these rapid intensification scenarios are warm ocean waters and heat exchange between the ocean and the atmosphere. Add last week’s lack of dry air and strong upper level winds, and the conditions for Hurricane Laura to intensify as it made its the way to its Louisiana landfall were ideal.

The warmer the world gets the worse the storms will become, as the vast majority of the heat trapped in the atmosphere by greenhouse gasses ends up in the ocean. That means more storms like Laura that pick up wind speed faster than forecasters can measure it.

Laura’s intensification rate is only matched by 2010’s Hurricane Karl. Storms in the Caribbean have intensified even faster. More recently, Hurricane Maria, which decimated Puerto Rico in 2017 and is blamed for thousands of deaths, jumped 128 kilometers an hour in the space of a day.

The most rapidly intensifying storms have also usually been the most destructive — Harvey, Irma, Maria, Florence, Michael, Dorian and now Laura. And that’s just in the past four years. In 2005, Hurricane Wilma set records for intensity, gaining 177 kilometers per hour in windspeed in just a day.

What’s more, Hurricane Laura – like Category 5 Hurricane Michael in 2018 and Category 4 Hurricane Harvey in 2017 – intensified through the point of landfall, rather than weakening as they approached the Gulf Coast, which until recently had been more typical. That had been the pattern Hurricane Katrina – a Category 5 that weakened to a Category 3 when it hit land – followed in 2005.

But the science is saying those days are likely past.

“Our confidence continues to grow that storms have become stronger, and it is linked to climate change and they will continue to get stronger as the world continues to warm,” Jim Kossin, who co-authored the University of Wisconsin/NOAA study told the Washington Post.