Vis menyen
Bellona.org > Latest News > Climate change > Note From New Orleans: A view of Harvey through the memories of Katrina

Note From New Orleans: A view of Harvey through the memories of Katrina

New Orleans awoke this week with a sense of dread it hadn’t experienced in 12 years. Hurricane Harvey had come ashore in neighboring Texas on Sunday, lashing its Gulf Coast with winds over 200 kilometers an hour and dumping on Houston more water than flows into the sea from the Mississippi River over the course of nine days. 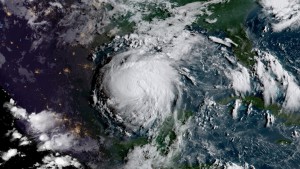 New Orleans awoke this week with a sense of dread it hadn’t experienced in 12 years. Hurricane Harvey had come ashore in neighboring Texas on Sunday, lashing its Gulf Coast with winds over 200 kilometers an hour and dumping on Houston more water than flows into the sea from the Mississippi River over the course of nine days.

All that before Tuesday, the anniversary of Hurricane Katrina making landfall in New Orleans in the pre-dawn hours of August 29, 2005. With Harvey’s path still uncertain, the city’s mayor, Mitch Landrieu, ordered the public schools closed and opened city fire stations for residents to fill and stack sandbags against encroaching waters.

As televisions carried images of waterborne exodus in Houston, New Orleans began to batten down its hatches. It knew Houston’s pain all too well.

By midweek, Harvey began sweeping north from Texas across Louisiana, leaving 22 dead. The Category 5 hurricane had broken up and become a tropical storm, but it is still the largest rainstorm ever seen in the continental United States and it’s moving slowly. 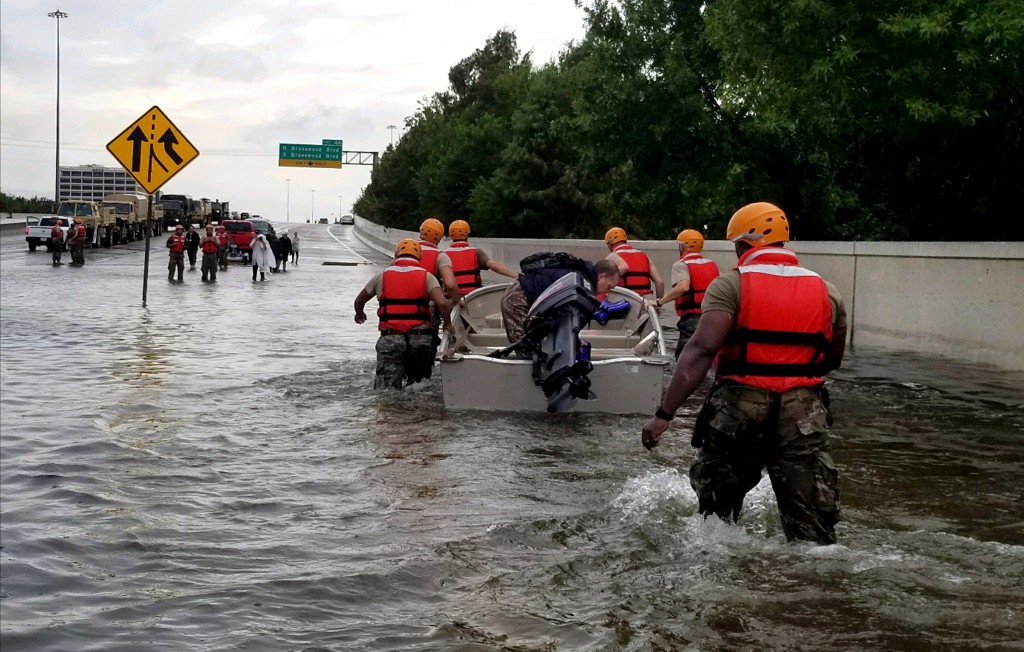 While fan launches, fishing boats and rafts ply Houston’s submerged roads to pluck up the tens of thousands still stranded, New Orleanians are watching the rescues with a mixture of horror and empathy.

The images grinding out of Harvey have triggered an eerie reminiscence of the floodwaters that spilled into their own streets after the levees broke in the aftermath of Katrina, flooding 80 percent of the city under six meters of water, and drowning 1,800 residents in their homes as they waited for rescue.

The connection between the two cities is more than a coincidence of bad luck during an active hurricane season. Houston was the first city to open its arms to 250,000 refugees in the bitterly divisive weeks following Katrina. After police opened fire on black residents fleeing New Orleans’s inundated Ninth Ward for shelter in white suburbs, some 100,000 of those refugees decided to stay put in their new sanctuary city. 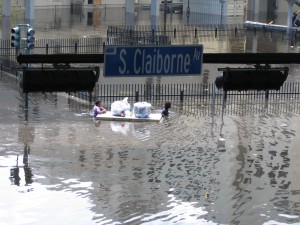 Survivors of Katrina making their way though New Orleans's Central Business District after the levees were breached. (Photo: Wikipedia)

Tired partisan squabbling over climate change unites the cities’ home states as well. Texas, a heavily republican redoubt, carried Donald Trump – who yanked American out of the Paris Climate Accord and last week eroded federal flood protections ­– by nine points over his opponent, Hillary Clinton. Louisiana, after floods tied to rising sea levels devastated 150,000 of its homes last summer, sent Trump to the White House by twice that.

While both states will hear plenty from their elected officials in coming days about how no one specific storm can be tied to global warming, and how their opponents are rushing to politicize disaster, there is little doubt about something else: The Gulf of Mexico, whose water temperature hasn’t fallen below 23 degrees for more than a year, is pushing out bigger, more calamitous rains.

Just three weeks ago, on August 5th, New Orleans’s nerves were again macerated as the city was doused in 23 centimeters of rain in less than three hours, turning streets into rivers, swamping cars and destroying businesses.

It’s no help that the city is two meters below sea level and served by antiquated drainage pumps, many of which weren’t functioning for the deluge. But residents here are growing weary of accommodating 100-years and 500-years storms back to back in only a few days. 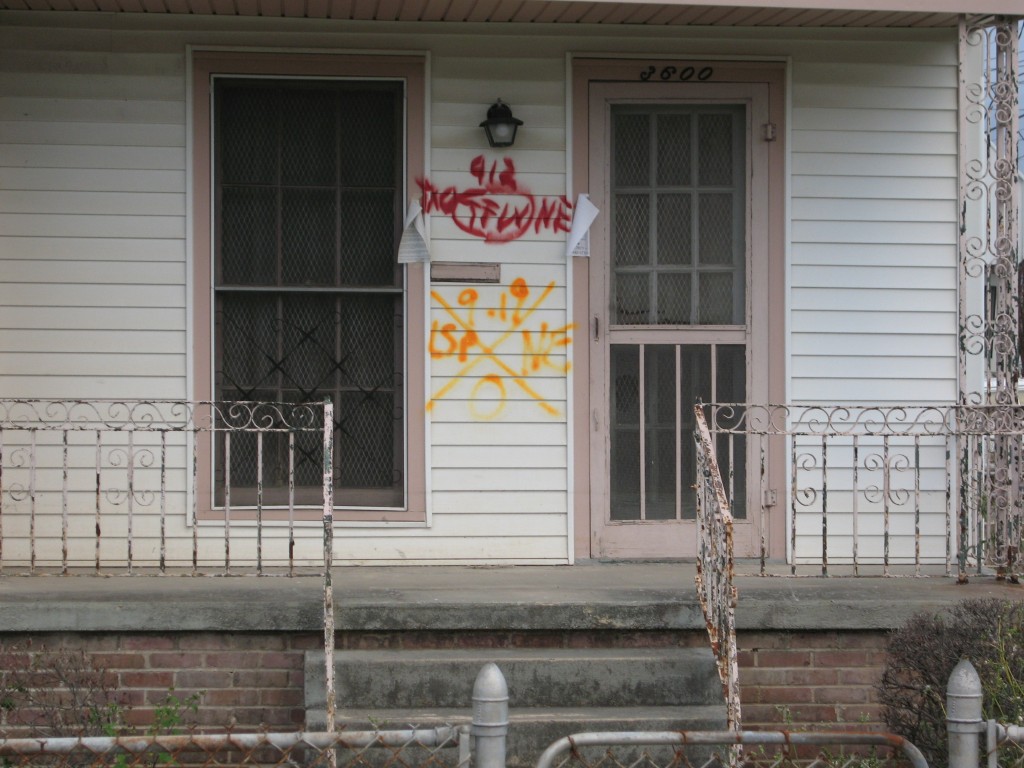 As old and shopworn as climate change denial is among politicos here in the South, compassion for those sharing in disaster is older still.

On Tuesday, as he was bracing New Orleans for possible evacuation, Mayor Landrieu tweeted out solidarity, writing: “No city welcomed more New Orleanians following Katrina than Houston, and our heart breaks for them right now.”

It was a sentiment echoed on the streets of the city’s French Quarter on Wednesday. Houston’s plight, said a local musician named Franklin Bockrat “is almost like a flashback. I feel most so because Houston was one of the first places that opened their doors for New Orleans.”

During Katrina, Bockrat had slept alone on his roof in the Ninth Ward for four nights, dangling his feet into his attic so he would wake up if the waters rose. “I wouldn’t wish it on my worst enemy,” he said.

So out of the anxiety New Orleans has served up the love.

The Cajun Navy, a local volunteer armada spawned as southern Louisiana flooded last summer, launched into action and drove heavy-duty pick-up trucks and fishing boats to Houston to troll flooding neighborhoods for survivors. Local t-shirt companies have churned out solidarity wear with Houston and are sending the funds to rescue efforts in Texas. And local hotels are paying a debt of gratitude for the hundreds of thousands who fled Katrina by offering free shelter to those fleeing Harvey.

But as New Orleans seems to sidestep a calamity that befell Houston this time, its twelve-year-old nightmare only barley recedes to the edges of consciousness. The evidence of Katrina remains written on the city’s facades and scored into the asphalt of its potholed streets. 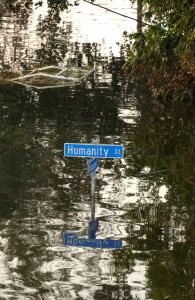 Humanity and Mandeville streets in New Orleans are swallowed by water during Katrina. (Photo: FEMA) FEMA

Still-visible spray-painted markings left by rescuers on buildings throughout the city chronicle the tragedies they found within: Two survivors, one dead. No survivors. Dead body inside. Send help.

And Katrina lies heavy on the city’s psychology as well. In its coverage of Houston, reporters with The Weather Channel, America’s premier meteorological network, studiously avoided comparing Harvey to Katrina directly. That’s because mention of the New Orleans storm triggers a documented stress response.

New Orleans psychologists interviewed by US media in the lead up to Hurricane Harvey say that Katrina produced a localize form of post-traumatic stress disorder. Many noted their clients were quick to cry. Some reported paranoia. Others were irritable or were drinking too much. All, they said, see the symptoms spike at the beginning of hurricane season ever since Katrina ripped through the city. Informally, it’s known here as “Katrina brain.”

For better or worse, the hurricane defines the city’s identity.

As the storm clouds recede, America is extending another fragile bargain to nature. Its politicians and pundits will speak of Harvey’s unique force, its unexpected smashing of records, its biblical floods, its epic loss of life and property – terms they once used to describe Katrina, and terms they have used to describe every flood and storm since.

And soon, after new nightmares of bureaucracy, rebuilding, locating missing relatives, fighting with insurance companies, and burying the dead, the scars left by Harvey will come to define a new Houston as well.