Yet again, a massive hurricane feeding off unusually warm ocean waters is aiming for US shores and has the potential to stall over heavily populated areas, menacing millions of people.

Published on September 13, 2018 by Charles Digges

Yet again, a massive hurricane feeding off unusually warm ocean waters is aiming for US shores and has the potential to stall over heavily populated areas, menacing millions of people.

Last year, Hurricane Harvey battered Houston, flooding most of the metropolis beneath meters of water. Hurricane Maria swamped the US Island territory of Puerto Rico, knocking out electricity for months, and leaving 3,000 dead – a death toll that surpassed even Hurricane Katrina’s.

Now Hurricane Florence threatens to inundate already waterlogged swathes of the US East Coast. When the storm hits the Carolinas on Friday, it will be one of the strongest on record to land so far north.

As the storm bears down, President Trump has unleashed a series of petty, self-aggrandizing tweets, claiming his response to Maria had been “incredibly successful.” Buried among these nuggets was also some good advice to those in in Florence’s path: Get prepared and listen to local officials.

Yet when it comes to extreme weather, Trump is complicit in the disaster to come. He has called climate change a hoax and empowered his administration to dismantle efforts to address its risks. He’s ripped the United States out of the Paris climate agreement, making the country he leads the only one in the world not signed on to address the threat in a cooperative global manner. 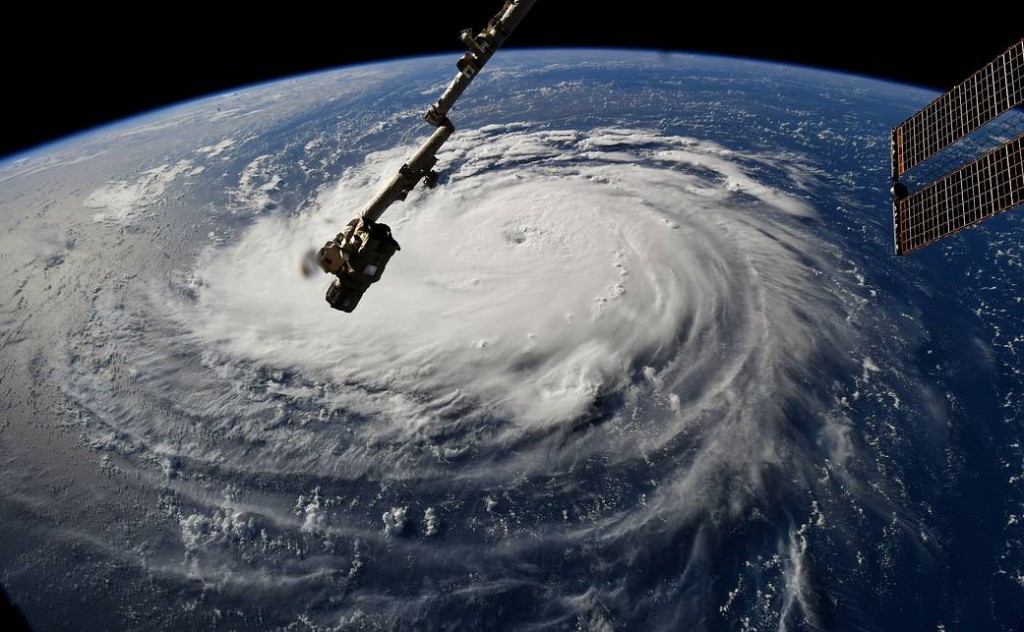 He handed his Environmental Protection Agency to a corrupt, self-dealing fossil fuel lawyer who granted coal and oil lobbies carte blanche to slash sensible regulations. And he has abdicated his role as a leader through the crisis to come by engaging in yet another twitter dispute over the number of those who died by Maria’s hands.

While scientists are fond of cautioning that no one storm can be traced specifically to climate change, they are less shy to do so as this year’s hurricane season produces its devastating main event.

“Hurricane Florence is a storm made worse by climate change,” Eric Holthaus, a meteorologist, wrote in the Washington Post. “A warmer atmosphere can hold more water vapor — producing heavier downpours and providing more energy to hurricanes, boosting their destructive potential. We already have evidence of these trends from around the world. This is no longer just a theory.”

Scientists at the federally funded National Center for Atmospheric Research agree. They cited evidence from last year’s Hurricane Harvey – which Trump’s supporters didn’t want to “politicize” by suggesting global warming might have played a role in its destructive force.

“Harvey could not have produced so much rain without human-induced climate change,” scientists at the center wrote. “Now Florence is feasting on warm Atlantic Ocean water. They added that, “the ocean is warming up systematically… It is the strongest signal of global warming.”

Scientists have also raised the alarm about the slowing wind currents that push hurricanes along, making storms more sluggish and apt to linger longer, dumping meters of rain on the areas they just ripped apart with wind. This effect of slowing cyclone systems has been observed all over the world.

And it was exactly this that gave Harvey its catastrophic signature. The storm dumped more water than flows out of the Mississippi River in a week on Houston’s head in just two days.

To watch the Weather Channel in the United States today is an exercise in déjà vu – Florence, say forecasters, will behave exactly the same.

And what has the response of the Trump administration been – aside from picking twitter fights with Puerto Rican mayors and governors who were rightly critical of his response to Maria?

Well, earlier this week, when Florence’s force became apparent to meteorologists, his administration announced a plan to roll back federal rules on methane, a potent greenhouse gas thought to trap the earth’s heat ten times as effectively than carbon dioxide.

In the days to come, Trump’s supporters in congress will doubtless accuse those who tie Florence to climate change of being “political.” They will ring their hands on national television and say that taking action against global warming distracts from responding to the disaster at hand.

And Trump will doubtless take to twitter and declare his own personal victory over the force of the storm, and perhaps appear in its wake to hand out paper towels as he did after Maria.

But when the storm clouds recede to reveal Florence’s scars, we will see how hollow his victory is. Unfortunately we will have to live with it far longer than he lasts in office.