Norway, a country known for its warm embrace of electric cars, has had a bit of a dark secret: Despite record-breaking sales of the zero-emissions vehicles and the lavish government subsides their owners enjoy, there hasn’t been much of anywhere to charge one if you lived in the country’s harsher Northern climbs.

Published on January 10, 2020 by Charles Digges

Norway, a country known for its warm embrace of electric cars, has had a bit of a dark secret: Despite record-breaking sales of the zero-emissions vehicles and the lavish government subsides their owners enjoy, there hasn’t been much of anywhere to charge one if you lived in the country’s harsher Northern climbs.

As the e-car craze exploded, officials up North have complained they were getting left behind and struggled to convince local power companies to provide local EVs with juice, often to no avail. Things got so bad that one frustrated electric car driver in Kirkenes – the tiny town on Norway’s border with Russia – shelled out nearly $3,000 of his own money to install a public charging station himself.

At long last, that’s starting to change. At the beginning of the year, Tesla, whose coveted Model 3 has been a bestseller on the Norwegian market, announced it will supply new superchargers to critical areas in Northern Scandinavia and Finland.

According to a report in the Barents Observer, the new Tesla superchargers are expected in Norway’s Finnmark County, which straddles the craggy Arctic coast from Tromsø to the Russian border.

The chargers be installed at various crossroads in the Norwegian towns of Karasjok, Kautokeino, Varangerbotn, Olderfjord and Alta, says the news portal, with two more bound for Finland’s Lapland region, and another in Abisko, in Sweden’s county of Norrbotten. This will add to chargers already installed in Kirkenes by Varanger Kraft, the Finnmark-based municipal power company. 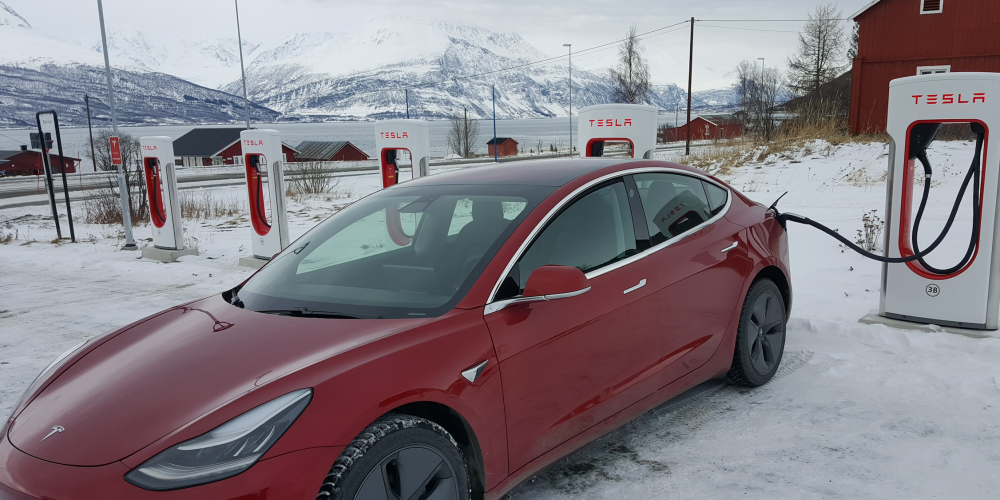 The new Tesla high-speed chargers are sure to give a boost to Bellona’s Arctic Electric Road project, which seeks to link Northern Scandinavia with Murmansk via a chain of EV charging stations. The road will extend to the south to St Petersburg through the organization’s Baltic Electric Road initiative.

Last September, authorities in the Russian town of Zapolyarny opened a high-speed electric car charging station just 45 kilometers from the Norwegian border, vastly easing the journey for EV drivers heading up the road to Murmansk. That station joins in Murmansk itself, donated by to the city by Bellona in 2017.

But improved charging opportunities on the Russian side won’t do much good if e-car drivers in Norway have to push their cars across the border.

Indeed, in a country where electric and hybrid car sales account for more than half of all vehicles sold – and where public policy makes the preference for emissions-free automobiles nearly a matter of law – the situation in Norway’s north was getting a little awkward.

By many accounts, Norway’s electric car mania took the country’s northern officials by surprise. It was as recently as 2017 when the scales of the Norwegian auto market tipped toward electric. That year, 54 percent of all cars sold in the country were either electric or hybrid, marking the first time in any major driving economy that environmentally friendly auto sales outpaced the their gas and diesel driven counterparts.

Since then, the figures have only climbed. By April of 2019 – three decades after Bellona registered Norway’s first electric car – 58.4 percent of cars sold in the country where either electric or hybrid, with 30.4 percent of them being purely electric.

Yury Sergeyev, a senior advisor on energy and electric mobility with Bellona’s Murmansk office, says the new Tesla charges will be a boon for Scandinavian tourists, who flock to Murmansk for shopping and vacations – increasingly in electric cars.

While most EVs are still priced too high for the average Russian, he says, wealthier Russian drivers covet the prestige of a Tesla, as well as allure of international travel. The new Tesla chargers, he said, will help drive that traffic.