Despite Norway’s hungry consumption of electric cars, the infrastructure to charge them has been sluggish to appear in the country’s northernmost regions, especially Finnmark County along the craggy Arctic coast. 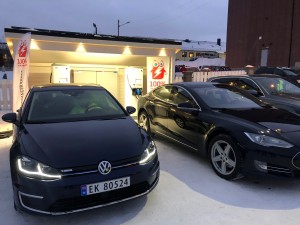 Despite Norway’s hungry consumption of electric cars, the infrastructure to charge them has been sluggish to appear in the country’s northernmost regions, especially Finnmark County along the craggy Arctic coast.

Things had gotten so bad for electric car owners that last March, Finn Helge Lund, a frustrated Tesla-driving resident of Kirkenes – the tiny town on the country’s border with Russia ­– shelled out nearly $3000 of his own money to install a public charging station himself.

The move was meant to troll Varanger Kraft, the Finnmark-based municipal power company, and force it into taking up the e-car charging slack. The local mayor, Rune Rafaelsen – himself in the market for an electric car if only there was somewhere to charge it ­– had grown frustrated with the lack of options.

Bellona, meanwhile, had launched its Arctic Electric Road project, spearheading an initiative with officials in Murmansk to beef up the charging infrastructure along highways leading into Russia out of Northern Scandinavia. But improved charging opportunities on the Russian side won’t do much good if e-car drivers in Norway have to push their cars across the border.

Indeed, in a country where electric and hybrid car sales account for more than half of all vehicles sold – and where public policy makes the preference for emissions-free automobiles nearly a matter of law – the situation for Finnmark was getting a little awkward.

But now things are finally starting to change. This week, on Christmas Eve, a charging station that can rapidly recharge two electric cars at a time was opened in Kirkenes.

“The appearance of a high-speed charging station in our city is a real Christmas present,” Lund told Bellona this week – a gift that he and the other 25 electric car drivers in town can share.

The 50-kilowatt charger, powered by the local hydroelectric plant and fitted with solar panels for the summer’s endless sun, can charge a car in 45 minutes – lopping hours off the charge times Lund and other local e-car drivers had grudgingly grown used to. The new charger sports three types of connections suitable for different kinds of electric cars. 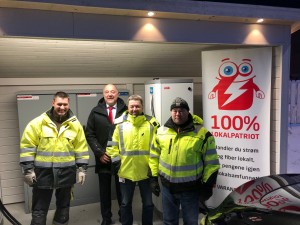 According Mayor Rafaelsen, the new station tops off three years of negotiations with Varanger Kraft, which had promised to open the new chargers as a pilot project before the New Year. Now, with the charger installed in a centrally located parking lot, the company has made good on its word.

“I am very proud that we managed to realize this,” Rafaelson said during the unveiling of the station this week. “We are very pleased to give tourists coming to Kirkenes the opportunity to charge their own cars with local energy.”

In Rafaelson’s accounting, the exploding popularity of electric cars in Norway took authorities in the country’s north by surprise. By the end of 2017, 54 percent of all cars sold in Norway were either electric or hybrid, marking the first time in any major driving economy that environmentally friendly auto sales outpaced the their gas and diesel driven counterparts.

That’s put pressure on Finnmark County to catch up. More pressure came from across the border, in Murmansk, where a charger installed by Bellona at the city’s Park Inn hotel has started to draw a small flow of motorists passing through in electric cars. Russia’s northern capital even hosted an electric car rally last summer, drawing e-car drivers from Russia and Norway alike, each of whom drove more than 1,000 kilometers a piece to highlight the need for an Arctic e-car charging infrastructure. 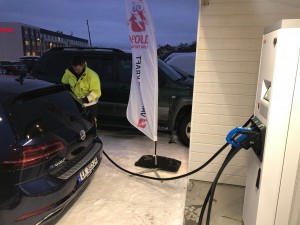 No wonder Finnmark was feeling a little left behind. But as Rafaelson tells it, the times have changed.

“This is the beginning of a new era in Kirkenes,” he said. “Now we can offer electric vehicle charging services for all want it – and of those there will be more and more.”

For a time, drivers can even charge up for free. According to Arnfinn Mentyjarvi, Varanger Kraft’s general manager, the company hasn’t yet worked out the kinks of the payment system. But rather than let the charge station sit idle, it’s currently operating as the one free high-speed charger in the country.

“For us now this is more a pilot project than a business – we’ll decide the issue of payment later,” Mentyjarvi said, noting that Varanger Kraft was working on opening charge stations in other locations in Finnmark County.

Yury Sergeev, a consultant with Bellona’s Murmansk offices, is glad to see the progress.

“Bellona is very pleased that our efforts to develop the charging infrastructure for electric vehicles in the Barents Region translate into real projects,” he said. “The opening of the charge station in Kirkenes is the event that electric drivers on both sides of the border were eagerly awaiting. We hope that this will become an additional incentive to overcome the difficulties in installing charging stations between Kirkenes and Murmansk. We are proud that Arctic Electric Road is becoming a reality.”