Bellona grants the gift of juice to Murmansk’s electric cars

It all started in 1992 as a bit of a circus. A group of young, shaggy haired Norwegians docked in Murmansk Harbor on a boat called the Genius. On it, they were hauling a rudimentary electric car, and as they threw down the gangway, they invited a perplexed but curious Russian public aboard to kick the tires.

It all started in 1992 as a bit of a circus. A group of young, shaggy haired Norwegians docked in Murmansk Harbor on a boat called the Genius. On it, they were hauling a rudimentary electric car, and as they threw down the gangway, they invited a perplexed but curious Russian public aboard to kick the tires.

It was Bellona’s first foray into Russia, one that sought to address critical questions of corroding Soviet nuclear submarines, renewable energy, solar power and factory pollution choking the Arctic’s industrial towns and wafting across the border into Norway.

But more important than that, it was an effort to cast a helping hand across the border into the rubble of the Soviet Union to offer some hope to a people struggling with a dismal environmental legacy.

Since then, the submarines have been dismantled, wind mills and solar panels have begun to sprout in some of Arctic Russia’s far-flung villages, and a Cold War dump of nuclear fuel is setting sail from the Russian Navy’s notorious Andreyeva Bay on its way to final disposal.

But throughout it, one question has remained: Where can you charge an electric car in Murmansk?

Now there is an answer. On Monday, Bellona opened the city’s first charge station at Murmansk’s Park Inn hotel, which can charge two electric or hybrid cars at once at no cost. It represents the first stationary e-car charge point in Russia’s Arctic capital.

The charge station is the culmination of a trek the Bellona Foundation started three years ago when its president, Frederic Hauge, made the first known trip with an electric car from Oslo to Murmansk, stopping to charge in Kirkenes on the Russian-Norwegian border. In the absence of any charging station in the city, the group refueled its Tesla Model S by running an extension cord out a window from a 220V outlet inside the city’s Park Inn hotel.

Now, to mark Russia’s Year of the Environment, the hotel is getting an upgrade: an EVlink Parking AC 7-22 kW, 2 – type 2 RFID charge station that it hopes will become an attraction to Russian and European visitors alike.

For Nils Bøhmer, Bellona’s general director, the charger is a gift to Murmansk for Russia’s Year of the Environment.

“For those of us at Bellona, an environmental NGO, it is important that this year produce concrete results, and not just occasions to talk about environmental challenges,” he said in remarks at the Park Inn.

Bellona and the hotel started talks on the new charge station during that initial visit of Hauge’s Tesla in 2014. At the time, locals gawked at Bellona’s electric car like it was a UFO, and Hauge offered the throng of local TV crews a spin. 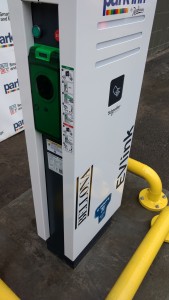 Since then, the Russian government has made a modest push to bring e-cars a little closer to earth. In 2015, Russian electric utility Rosseti and Alabama-based Schneider Electric – which makes the Park Inn’s charge station – launched a collaboration to boost the number of EV charge points in Moscow.

When Bellona drove its Tesla to Murmansk, Bøhmer said everyone asked the same question they were asking back in 1992: Where do you charge it?

“They were right to ask,” said Bøhmer. “One of the challenges of electric cars is providing an infrastructure with charging stations. I am happy that today Bellona is providing an answer to that question.”

Now that Murmansk can charge its electric cars, Bøhmer said he hopes the new charge station will mark the beginning of a new wave of electric and hybrid car ownership in Russia.

Such were the modest beginnings for electric cars in Norway, where in 1987, Hauge and Bellona brought their first electric car over the border from Sweden and charged it up on an outlet at Bellona’s office.

It took more than three years to clear the bureaucratic hurdles to make Norwegian roads accommodating to e-cars. The technology was in its infancy as well: Hauge’s car could only go 45 kilometers before it needed to recharge.

In 1995, Hauge joined forces with Morten Harket, the lead man for the 80s Norwegian heartthrob act A-Ha, to showcase the environmental benefits of electric mobility. The two hit Norway’s open road – and blew through its expensive tolls, refusing to pay up. 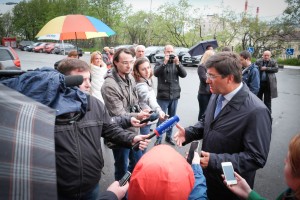 By 2016, electric cars represented more than 15 percent of all the cars on Norwegian roads, and the government is pushing to make the country’s vehicles all electric by 2025.

Today, said Bøhmer, there are over 100,000 electric cars in Norway – no small feat for a country of 5 million people.

”That’s 100,000 cars without tailpipes and that don’t pollute,” Bøhmer said. ”We figured, why couldn’t we do the same for Murmansk?”

The beginnings are slow, but the initiative is finding traction with the local government. Murmansk’s deputy governor Yevgeny Nikora told Bellona he’d bought into the future by pre-ordering an E-Mobil, Russia’s natively produced hybrid answer to the Toyota Prius.

But Nikora has yet to get his new car. Serial production of the E-Mobil crunched in 2014 – but not before 200,000 people in Russia had likewise put in pre-orders alongside Nikora.

That’s a lot of desire for electric and hybrid cars in a country that first got a peek at them only a little more than three years ago.

Nikora said Monday that he has faith that electric cars will catch up in Russia.

” -I expect the prices for electric cars to drop significantly the next 3 years,” he told the audience at the Park Inn. “Even if electric cars today cost more than their traditional petroleum-driven counterparts, people now have a choice. They can now choose to put their money into an electric vehicle, and thus also know that they are putting money into a better future for their children.”

When Russian industry finally gets it together to start producing it’s own hybrids and e-cars, drivers in Murmansk will know where to plug them in.