Another e-car milestone opens on the Russian-Norwegian border

The Murmansk region took another small step toward expanding infrastructure for electric cars on Friday, as officials opened a high-speed charging station in the Russian-Norwegian border town of Zapolyarny.

Published on September 3, 2019 by Charles Digges 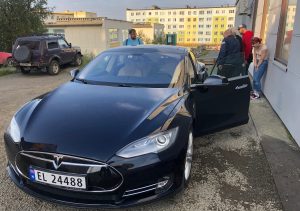 The Murmansk region took another small step toward expanding infrastructure for electric cars on Friday, as officials opened a high-speed charging station in the Russian-Norwegian border town of Zapolyarny.

The 50-kilowatt charger was connected at the city’s Pechenga hotel, which is owned by the Kola Mining and Metallurgy Company – a daughter branch of Norilsk Nickel.

Standing at 45 kilometers from the Norwegian border, the charge station will function as a needed milestone for electric cars travelling between Murmansk and the northern Norwegian border town of Kirkenes.

It could represent a broader environmental milestone as well. The Kola Minding and Metallurgy Company – which partnered with Bellona to open the charge station – produces many of the metals critical for electric car batteries, like nickel and copper.

But the company, like its parent in Norilsk, is struggling to right a long legacy of dangerous sulfur dioxide emissions. At the same time, major electric car producers like Tesla and Volvo, have said they won’t buy battery materials from unrepentant polluters.

As of last year, however, officials at Norilsk Nickel have pledge to pour some $17 billion into company-wide environmental upgrades.

These upgrades, says Oskar Njaa, Bellona’s general director for international affairs, could be critical to the company’s future success – especially while analysts are predicting that 38 percent of the cars sold worldwide by 2040 will be electric.

“We’re grateful that the KMMC played such a vital role in establishing this charge station,” Njaa says. “With this in mind, the company needs to take into consideration the environmental demands most electric car manufacturer place on their supply chains. Norilsk Nickel needs to find a way to end production that leads to pollution. Their minerals are key to many products that will help us fight climate change and the disruption of the global ecosystem. Civil society organizations like Bellona stand ready to aid them in their efforts.”

Zapolyarny’s new charging station is part of a broader cooperative plan called the Arctic Electric Road, which was launched in 2017.

The effort, spearheaded by Bellona and the Murmansk regional government, seeks to line the motorways running between Russian and its neighbors in Scandinavia with a charging infrastructure for electric cars.

The first brick in the Arctic Electric Road was laid earlier that same year, when Bellona donated a charging station to Murmansk’s Park Inn by Radisson hotel. Ever since, the charge station has led to an uptick in European electric-car-driving guests who can now visit Murmansk without feeling charge anxiety.

The new charge station in Zapolyarny will help quell those anxieties even further. The $30,000 unit will be capable of charging one car at a time, delivering a full battery’s worth of power in about two hours. Fees are determined by how long a car needs to charge.

Of course, electric cars are still a rare sight on Russian roads, but a small momentum is starting to build. According to official statistics, there were about 1,800 electric cars registered in Russia last year. That figure doesn’t account for the number of used electric cars, which pour across the Sea of Japan to Russia’s Far East. Anecdotally, those account for another 1,000 electric cars that hit Russia’s roads in 2018.

Meanwhile Russian e-car drivers are starting to flex their civic muscles. According to a legislative packages passed by Moscow in 2015, every traditional fueling station in the country must get outfitted with high-speed chargers for e-car owners.

The practical rollout of that ambitious plan has been predictably sluggish. But Russia’s e-car drivers know their rights, and last year, hundreds of them took to the streets in Vladivostok to demand the government build the charging stations it promised them.

All of which reveals an important truth about spreading the culture of electric cars: If you build the chargers, the cars will come.

With that hope in mind, Bellona has been working to spirit e-car technology into Russia for decades. The first time, in 1992, it was aboard Bellona’s ship, the Genius. The activists sailed into the Arctic harbor and lowered the gangway, inviting curious onlookers aboard to kick the tires of its sci-fi contraption.

In 2014, Bellona President Frederic Hauge repeated the stunt, this time driving a Tesla Model S from Oslo to Murmansk in the first known West-East e-car trip ever.

But while there, the only way Hauge could refuel his Tesla was by running an extension cord out the window of his room at the Park Inn Hotel. It was on that trip that Bellona decided it wanted to leave a little more e-car technology behind. Three years later, that first charger opened in Murmansk. It’s still operating today, offering e-car drivers a free place to top up their voltage.