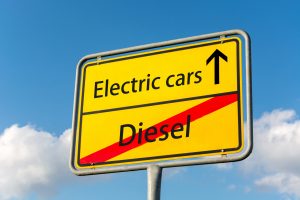 In part 1 of these series we addressed the misleading effects of greenwashing and how this often blocks efforts which are actually trying to combat climate change. With the aim to walk you through this madness of “green scams” with open eyes, we share some tips on how to avoid falling into the trap of believing so-called “scientific reports”. In order to give you a more tangible approach, we based our steps on the recently released study by the German Ifo institute which compares emissions of a Diesel and an electric vehicle (EV). The authors concluded that under current conditions in Germany, Diesel would emit less CO2 than their electric counterparts. Part 1 covered the points to keep in mind when first encountering such a study, including the authors’ interests and the assumptions made about data and the method of comparing the subjects. This is part 2 where we look at the remaining assumptions that need to be taken into consideration such as the characteristics of the subjects of the study as well as the contextual calculations made.

Step 2: What are the assumptions?

The authors assume that the life cycle of a battery only lasts for 150,000km, which is just 300 cycles. Tesla itself guarantees an 8 years lifetime, or 192,000km. Under EU law, Mercedes is obligated to provide a two-year warranty (without a mileage limit), and offers a premium warranty package from Mercedes for 12 years or 200,000km. During this time, combustion engines need more parts replaced due to wear and tear than EVs. Indeed, some analyses have shown that a single battery can drive for more than 270,000km and still have 91% of its initial capacity left. Even after 500,000km, about 80% of the capacity remains. This should also be considered in comparison to the average lifetime of an internal combustion vehicle of 220,000km. In addition to the much longer lifetime of a battery, neither recycling nor second life of batteries after they are exchanged were taken into consideration. Together, these facts can significantly reduce the overall CO2 footprint of batteries.

Power emissions for the Tesla 3 are estimated based on the average German grid emissions of about 0.55kgCO2/kWh. 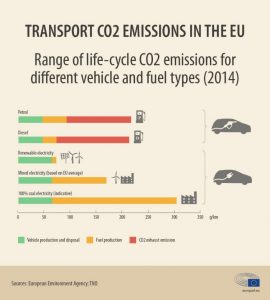 Emissions from one country don’t necessarily reflect those of another, therefore they are not always comparable

Taking the average grid emissions is a sensible approach as final power used by consumers is always grey, i.e. represents the actual mix of power generation at the particular place and point in time. Also guarantees of origin for renewable electricity that are used by many charging station operators cannot change this fact. As the above adjustments to the assumptions of the Ifo analysis in 1) and 2) have shown, even at the currently rather dirty power generation in Germany, EVs are still relatively clean – and cleaner than actually comparable combustion engine cars. On an EU level, the average CO2 intensity is even less than in Germany. Overall, through the addition of new renewable capacity, grid emissions are set to reduce every year. This means that the emissions of an EV per km are going to reduce steadily, while the emission from the fossil fuel production will not.