Vis menyen
Bellona.org > Latest News > Nuclear issues > Nuclear Russia > Bellona’s Russian offices sum up the work they did in 2020, a most unusual year

Bellona’s Russian offices sum up the work they did in 2020, a most unusual year

The past year has been unusual throughout the world. Restrictions related to holding public events, gathering in offices and taking trips Bellona’s Russian offices to revise a number of projects and master new ways of getting its work done. In light of that, we’re pleased with the way we have coped with the new circumstances and present what we have, against long odds, managed to accomplish this year.

Published on January 13, 2021 by Nikita Petrov, translated by Charles Digges 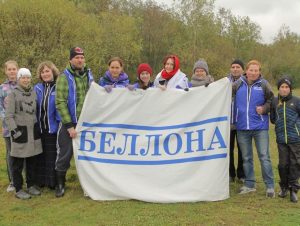 The past year has been unusual throughout the world. Restrictions related to holding public events, gathering in offices and taking trips Bellona’s Russian offices to revise a number of projects and master new ways of getting its work done. In light of that, we’re pleased with the way we have coped with the new circumstances and present what we have, against long odds, managed to accomplish this year.

Throughout 2020, our public legal office has been helping people to sort out various environmental violations and find ways to protect their right to a healthy environment. Last year, our lawyers worked with more than 110 complaints from citizens, wrote inquiries to the authorities and helped to bring cases to courts.

In December 2020, as part of the work of our legal office, we were victorious in a lawsuit we brought to defend Murinsky Park in St. Petersburg from illegal development. Bellona’s lawyer, Ksenia Mikhailova, succeeded in blocking the construction of a sports complex on the park’s territory, settling a confrontation between local residents and the developed that had lasted for more than two years.

Mikhailova continues to defend the interests of residents of the Voskresensky District of St. Petersburg’s Moscow Region in court, who are opposed to the construction of a waste incineration plant their neighborhood. It took three years for the developer AGK-1 LLC, a subsidiary of the state corporation Rostec, to provide design documentation for a public environmental review – despite the fact that it is obliged to do so by law. Efforts to obtain all the necessary documentation necessary for the environmental review proceeded all the way to the Russian Supreme Court.

As expected, the technologies listed in the project will cause significant harm to the environment. The validity of the conclusions set forth in the environmental review

was confirmed by the Russian Academy of Sciences. Yet even this won’t force adjustments to the project or canceling construction plans. Therefore, Bellona continues to fight the case and entered a new round of litigation this year.

At the very end of the outgoing year, Bellona helped to carry out a public environmental review of a reclamation project along the Yenisei River in Krasnoyarsk.

The story is typical: While building a new residential area, the developer used all the available territory for housing construction and did not create the necessary social infrastructure. The houses are built, inhabited, and now, when the parents of schoolchildren have the expected problems, the developer requires an additional plot, for which he plans to reclaim the territory in the Abakan channel of the Yenisei.

The public environmental process identified several violations, among them the development project’s lack of provisions for protection systems and civil defense measures. The project also lacked comprehensive assessment of the environmental risk of the planned activity.

One of the major reports Bellona wrote this year was entitled “A Site of accumulated environmental harm (toxic waste landfill” Krasny Bor “).” This is a subject we have been following for 20 years, having previously issued a report the class 1 and 2 wastes houses at Krasny Bor, entitled “The problem of toxic waste in the St. Petersburg region,” which was published in 2000.

Krasny Bor has been operating for 53 years. The first attempts to reduce its danger to the population were made back in the 80s when Finland, Estonia and Sweden expressed their concern about the landfill, and the potential for its waste to end up in the Gulf of Finland.

Now that Krasny Bor has been taken out of local hands and transferred to federal property, it can now be included in national ecology projects, bringing hope that its problems can finally be addressed. The federal environmental operator plans to completely reclaim the landfill by 2024 and has allocated significant funds to do so. As a companion piece to this years report, we published an in-depth article on Krasny Bor for the general public.

Another important issue we dealt with this year was that of depleted uranium hexafluoride. Given the import of this substance to Russia, it was necessary to determine whether it constitutes radioactive waste or is instead a material that’s usable in various areas of the nuclear economy. This six-month effort resulted in a report on the handling of depleted uranium hexafluoride and the prospects for its use, which our experts presented to journalists. Separately, based on the report, we produced an in-depth article for the general public.

Another major report we produced in 202 focused on air pollution using St Petersburg as the model. We tracked down what the major sources of local air pollution are, reported on which ones are the most dangerous, suggest how they should be properly monitored, and examined which legislation regulates atmospheric conditions.

In November 2020, for the first time in four years, Bellona hosted a large-scale conference for environmental lawyers, activists and human rights defenders which gathered more than 350 people.

Starting in September, Bellona, ​​in conjunction with the Renewable Energy Development Association, hosted three webinars dedicated to the development of renewable energy in Russia. We specifically addressed the topic of state support for renewable energy generation, which is of concern to industry representatives. The webinars were attended by representatives of the largest Russian companies in the industry, government officials, as well as experts from Russia and abroad.

Following the results of the first webinar, Bellona and Renewable Energy Development Association signed an agreement on cooperation in development of a legal framework and the formation of a favorable investment climate, as well as the exchange of Russian and international experience in the implementation of renewable energy projects.

Bellona also became an official partner of the Arctic Hydrogen Energy Applications and Demonstrations (AHEAD) project, which is being implemented within the Arctic Council.

This project will see the implementation of the experimental Snowflake facility, which will operate fully on hydrogen and renewable sources on the Yamal Peninsula beginning in 2023. The spherical modules of the station will provide all the amenities of a modern research center – laboratories, offices, rooms for teleconferences and seminar centers –  where engineers, researchers, scientists and students from all over the world can work on environmentally friendly solutions for continued life and work in the Arctic.

Bellona continues to cooperate with the Clean Arctic Alliance, whose main task is to promote a ban on the use of heavy naval fuel in the Arctic region.

From the beginning of this month, the transport tax for electric vehicle owners has been  abolished in the Murmansk region, an event that marks another successful milestone on the path to creating a favorable environment for increasing how many electric cars there are locally, as well as expanding the infrastructure to charge them. Bellona’s office in Murmansk has been involved in this process for five years and we are glad that the local civic authorities have heeded the public’s calls on this issue.

In 2020, Bellona once again held the Zero Negative Impact on the Environment campaign. With this program, Bellona addresses the industrial enterprises of the Murmansk region, asking them to suspend their polluting activities or otherwise demonstrate their environmental awareness. The largest industrial companies in the region, such as the Kola Mining and Metallurgy Company, Murmanenergosbyt, the Kola nuclear power plant, the KolAtomEnergoSbyt branch and others, supported the action in one form or another.

This year, 2,108 people took part in our annual “Eco-Lawyer”competition for students, which is almost 500 more than in 2019. Participants represented 429 settlements, 63 regions of the Russian Federation and 152 educational institutions. Illuminating the work of young specialists from large Russian universities on a yearly basis makes it possible to assess just how effectively citizens and environmental authorities are interacting. 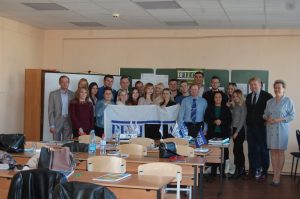 Participants in Bellona's Eco-Jurist contest in the city of Orel.

This year Bellona held a new online video competition called “A View from My Window.” As the competition took place in the midst of the covid-19 pandemic, its main condition was to show environmental problem that can be directly observed from the participants’ homes. The winners received special awards, and all participants can count on the help of our offices in solving problems they showed us. Also this year we held the secondAll-Russian ecological competition of educational projects, called “EcoProsvet,” which attracted more than 220 teachers, activists and representatives of various organizations from Russia, Belarus and Kazakhstan.

This year, despite the restrictions in schools in St. Petersburg, we and our volunteers, conducted 99 face-to-face lessons environmental lessons in local schools. Another eight lessons were held in virtual and correspondence form. This year we discussed the following topics with school kids: how to spend the holidays environmentally, food waste, environmental problems of St. Petersburg and Russia, and the Chernobyl accident. 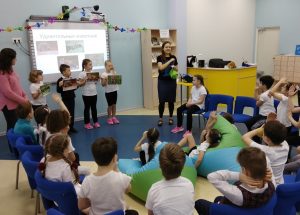 One of Bellona's environmental lessons in a St Petersburg classroom.

Within the framework of the EcoMessage, our English subproject, our foreign volunteers from Finland, France and the USA prepared video materials where schoolchildren combined learning English with environmental education. Fourty six schools from 18 cities of Russia have joined this project. A total of 126 such lessons were held.

Bellona also became a partner of the Together Brighter All-Russian Festival of Energy Conservation and Ecology for the fourth time, organizing the Bright North intellectual game for schoolchildren from Murmansk, as well as conducting a number of environmental lessons in English at city schools.

Bellona has launched a website o-v-o-s.ru, which publishes weekly information on scheduled hearings and discussions concerning project documentation for potentially hazardous facilities. Together with the site, there are nine mailing lists of announcements of public hearings in all of Russia’s federal districts. At the moment, 583 people receive the newsletter.

Throughout the year on our web pages  we have covered a wide range of issues related to ecology and environmental protection, including nuclear energy, renewable energy, waste management, global climate change, the right to a healthy environment.

In particular, we have released four issues of the journal “Ecopravo,” our Russian-language environmental magazine, dedicated to the topics of sustainable development, water in the city, air in the city, and the health of the planet.

And we have finally equipped a space in the office where you can shoot high-quality videos, so in the new year we will try to please you with new interesting content. In the meantime, you can watch another film created by us, dedicated to the struggle of the residents of Voskresensk and the village of Svistyagino against the construction of an incineration plant.

It has been a tough year. Despite the current circumstances, we see that environmental interests of Russian citizens and government officials alike are steadily growing. People are protesting, sorting garbage, demanding from manufacturers to switch to other types of packaging and demanding new laws and federal projects. As a consquence large sums of money being allocated to address environmental accidents and accumulated damage. All this requires the oversight and participation of the public. Bellona will continue to participate in this movement and to contribute to the preservation of nature and human health.