A toxic stew that’s threatened St Petersburg, Russia is finally getting mopped up 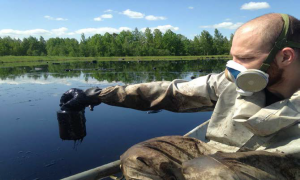 Those are just a few of the ingredients in a poisonous stew that’s been simmering for more than 50 years at Krasny Bor, a sprawling toxic waste dump near the outskirts of St Petersburg, Russia.

Founded in 1967, Krasny Bor’s ditches and pools were meant by the Soviet engineers who designed them to be only a temporary storage point for waste from the city’s heavy industries. But over the decades, the open-pit landfill only 30 kilometers from the city center became a permanent, if unwelcome, fixture.

By now the 73-hectare site dug in Cambrian clay has amassed some 2 million tons of toxic waste which is under constant threat of leaking into area waterways and leaching into the nearby Gulf of Finland. Each new rainstorm, snow covering or spring thaw brings fears that Krasny Bor’s dangerous brew will overtop its dams and spill into the surrounding environment.

Earlier this month, officials said that liquid levels at the site were creeping dangerously close to sloshing over the top of dikes surrounding the site after a recent spate of rain precipitation. 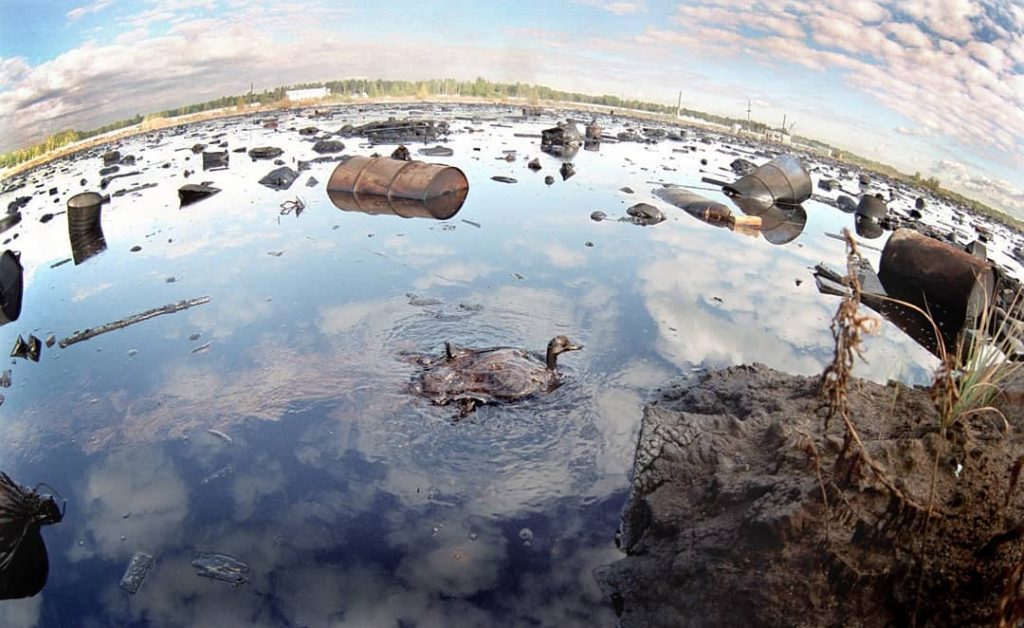 A duck swims in a toxic pool at the Krasny Bor toxic waste dump. Credit: Bellona

“The dams surrounding the site aren’t in the best condition,” says Maxim Korolkov, the Federal Operator’s deputy director. “It’s a critical situation. There’s only ten centimeters remaining to their top edges. We can’t allow a leak into the terrain.”

The site lacks advanced technological means to hold back the toxic deluge. According to Korolkov, workers at Krasny Bor have resorted to using shovels and buckets to prevent contaminated water from spilling over the barriers.

Officially, Krasny Bor was closed to accepting any more toxic waste in 2015. Since then Russia’s Ministry of Natural Resources and Environment has included the site on a register of areas that have encountered significant environmental damage.

But that alone has hardly solved the problem of the site’s pernicious legacy. It wasn’t until 2020 that the Federal Ecological Operator intervened, taking Krasny Bor out of local hands and pledging to completely recultivate it by 2024.

It won’t be an easy task.

Literally thousands of different chemicals have been poured into the site over the years, with little attention paid to what they might mix with – producing newer and often more dangerous compounds. Toxic industrial byproducts, both solid and liquid, were sunk into its canals, in many cases without any sort of protective casing. 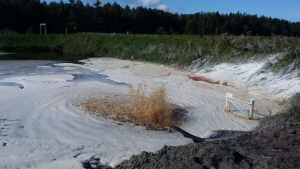 Water samples drawn from the site have revealed a periodic table’s worth of poisonous hazards. Tests by environmentalists have shown the presence of mercury, cadmium, antimony, polychlorinated biphenyls, benzopyrene, formaldehyde, phenols, mercury, trivalent chromium and a host of other harmful substances at levels far exceeding Russia’s legal limits.

Over the years, as these substances were dumped into Krasny Bors’ ditches, they were covered over with layers of soil, only to be dumped on again. This has led to a more or less constant condition of overflow. The site’s drainage system leads into the Bolshoy Izhorets River, a tributary of the Neva River – the source of St Petersburg’s drinking water ­– which, in turn, leads into the Gulf of Finland and the Baltic Sea.

The shoddy construction characterizing the site has led to the discharge of about 14 million cubic meters of contaminated water into surface and groundwater, a study by the Vedeneev All-Russia Research institute of hydraulic engineering concluded.

The effects on villages surrounding the site have been profound. Another study in 2001 found copper, selenium, vanadium, nickel and manganese accruing in the soils of household gardens. The concentrations of cadmium and zinc alone were five to seven times higher than permissible limits.

Olga Yeremina, formerly a chemist at Krasny Bor, recalled the slap-dash methods for interring some of the most dangerous substances the site accepted.

“They took a lot of pesticides,” she says. “They were brought in sacks and stupidly buried. They threw some clay on top and that was it.”

In other cases, she says, transformers loaded with oil and polychlorinated biphenyls (PCBs) were simply dropped into pools without being packed in protective metal casings – a measure meant to save a few rubles. The site also accepted soil tainted with heptyl, an extremely toxic component of rocket fuel.

Yury Vdovin, a former chemist who now sits on the board of Bellona’s St Petersburg office, likewise remembers the risky disposal practices at the site. In one instance, he says, he saw site workers simply pour containers of carbon tetrachloride – a refrigerant and aerosol propellant – directly into the canals. 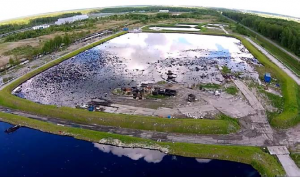 A view of Krasny Bor from above. Credit: Bellona

“Carbon tetrachloride is heavier than water and goes straight to the bottom, creating organochlorine compounds with anything it meets,” he says. “So, in the pit itself, they created some very poisonous compounds.”

The mixture, he recalls, produced a sharp smell.

“It would be a rare bird that could fly to the middle of that lake,” Vdovin joked darkly.

After years of inertia and local political paralysis about the Krasny Bor question, the site has finally been taken under the wing of the Federal Ecological Operator, a structure that has been formed out of Russia’s radioactive waste handling body.

The move is part of a larger effort by Rosatom, Russia’s state nuclear corporation, to address not only the country’s accrued radioactive waste, but so-called Class I and Class II wastes as well. Class II wastes are characterized as substances that prevent ecosystem restoration for as long as 30 years. Class I wastes prevent ecosystem restoration forever.

It’s expected that much of the work toward resolving the dangers at Krasny Bor will be guided by a new report Bellona has published in Russian, entitled “An Installation of Accrued Environmental Damage (the Krasny Bor Toxic Waste Landfill).”

Over the next few years, the Federal Ecological Operator plans to build a system of shelters over Krasny Bor’s open pits and canals to stem the dangerous flooding it too often experiences. It will also install a layered screen around its perimeter to prevent further contamination of groundwater. Then the hard work of actually purifying the contents of the open canals will begin, alongside a fortification of the site’s monitoring systems.

While a half century’s worth of toxic waste dumping would be hard to undo under any circumstances, it is hoped that the Federal Ecological Operator can draw Krasny Bor’s malignant era to a close.