From Norway to Moscow in an electric car, an improbable journey made possible

When a smattering charge stations began popping up along the Russian border a few years ago, they drew a small but devoted class of electric car drivers eager to traverse the once-forbidding Cold War frontier by road from Norway.

Published on September 28, 2020 by Charles Digges 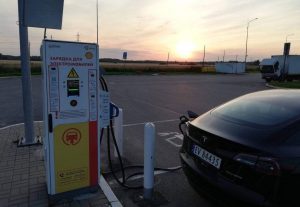 When a smattering charge stations began popping up along the Russian border a few years ago, they drew a small but devoted class of electric car drivers eager to traverse the once-forbidding Cold War frontier by road from Norway.

For Lars Georg Fordal of the Barents Secretariat, which promotes cooperation between the two countries, such trips to Murmansk from Kirkenes, the far-northern Norwegian outpost, soon  became routine.

“I am used to such trips, for me it is commonplace,” says Fordal, who drives a Tesla. “It is very convenient. On the way to Murmansk from Kirkenes, there is another charging station in Zapolyarny,” a midpoint Russian village between the two cites. “But it often doesn’t work. Although this is not a problem if there is always a working charger in Murmansk.”

That charger was put there by Bellona in 2017 after the organization’s president, Frederic Hauge, grew tired of having to charge his Tesla on a hotel room outlet every time he drove to the city. Since then, Bellona has engaged with local politicians and businesses in an effort to develop a robust network of high-speed charge points along the highways connecting Northern Scandinavia to Northwest Russia.

As a result, what used to be a journey undertaken by the adventurous few has gotten closer to a commute for the carbon-conscious many.

But Russia as a whole still lags behind its European neighbors in its commitment to emissions-free electric transport. In recent years, some of Russia’s larger cities, like St Petersburg and Moscow, have seen growth in the number of electric charge stations, but those developments are hardly uniform. Throughout the vast and chilly distances separating those cities, electric car drivers are left with little more than what Hauge used in 2016: an extension cord and hours of charging on a household plug to refuel.

All of which presented Fordal with a conundrum this summer when his business demanded he go farther than Murmansk. But with the dawning of the coronavirus age, with its restrictions on air travel and border crossings – to say nothing of the health perils of even doing so – meant he was out of luck when he had to fly to Moscow.  Could he drive his Tesla instead?

The answer, it turns out, was yes.

“I decided to drive my electric car,” says Fordal. “Firstly, I decided that due to the situation with the coronavirus, it was better not to use public transport, and so I decided that it would be safer by car than by plane with other passengers. Secondly, there were no flights anyway.”

His journey proves not only that it can be done, but also sketches a roadmap for what needs to be improved for the electric car drivers that will hopefully come after him.

The main thing, Fordal said, was planning a route that would provide him access to as many high-speed charging stations as possible. That meant skipping his usual loop from Kirkenes to Murmansk. The entire expanse of Russia’s Karelia, which lies between Murmansk and St Petersburg, doesn’t have a single electric car charging station.

“If we built at least two or three fast charging stations in the south of the Murmansk region and the same number in Karelia, we could talk about the opening of the Oslo-Moscow electric car connection,” Fordal says.

But to make it to Moscow, Fordal had to travel via Finland and dogleg to the Leningrad Region around St Petersburg, using charge stations listed in the plugshare app as a guide. Fordal’s overall journey was about 3,000 kilometers.

“I charged up to a full battery in Kirkenes, then in the Finnish towns of Levi, Rovaniemi and Laaperanta,” Fordal says. “The next charging station was waiting for me at a Shell gas station in Ryabovo between Vyborg and St. Petersburg. I wasn’t sure how it would work out there, but it went well. You make a deposit on a special card. I deposited 1000 rubles, and that was enough for more than a hundred percent of the charge. ”

Ryabovo has a recently installed high-speed charger, and after about 45 minutes, during which he chatted with a Russian driving an electric jaguar, Fordal was ready to set out south for Moscow.

The next charger was 500 kilometers away in the Tver Region.

“Everything went according to plan,” he says. “It’s just when you go somewhere for the first time and you have only 70 km of charge left, and you’re not sure how everything will work out, you get a little nervous.”

In such situations, Fordal has a Plan B – charging for hours on a regular outlet.

“It’s good that I never had to resort to Plan B,” Fordal says.

In the Tver Region, Fordal ran into a queue of drivers who all needed to charge up to full. He had to wait about two hours to replenish his battery on the single high-speed charger in town. But that gave him time to top up his card with another 500 rubles, which was enough to get him to the Russian capital.

While there, Fordal says he met a driver of a Nissan Leaf, a driver of an electric BMW, and numerous Tesla owners. But despite Moscow’s burgeoning charging infrastructure, he says that electric cars are still a rare sight.

“It is very convenient to use electric cars in Moscow,” says Fordal. “There are many fast charges in closed courtyards with parking, and there are many slow charging stations where you can leave your car for several hours.”

On top of that, MGTS, Moscow’s sprawling telephone utility, offers access keys to the chargers. All you have to do is register on their website, which Fordal found to be friendly to non-Russian speakers.

“One inconvenience: if you do not speak Russian, you simply will not be able to fill out an online questionnaire, ”says Fordal.

When asked if he would have made the trip again, Fordal smiles but shake his head.

“It was an exciting adventure, but it takes a long time,” he says. “The roads are good, the service is very good. You just need to quickly adapt to traffic congestion in St. Petersburg, for instance.”

But he was still surprised that electric cars remain such a rare sight in Russia’s largest cities.

“There is everything you need for the convenient use of electric vehicles,” he says. “In winter, an electric car warms up faster than an internal combustion engine and is much cheaper to operate.”

With the number of electric cars being worldwide on an upswing, one can hope that they will become a more familiar sight on Russian roads.