One of Russia’s fast neutron reactors granted a runtime extension

Russia’s nuclear regulator has agreed to extend the operational lifetime of 39-year-old experimental reactor as part of a wide-ranging modernization program at the Beloyarsk nuclear plant.

Published on April 8, 2020 by Charles Digges 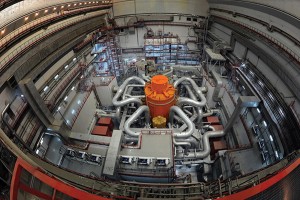 Russia’s nuclear regulator has agreed to extend the operational lifetime of 39-year-old experimental reactor as part of a wide-ranging modernization program at the Beloyarsk nuclear plant.

The reactor, a BN-600, is a powerful sodium-cooled fast-breeder and its continued operation marks a step by Russia toward developing a closed nuclear fuel cycle, a subject of concern among some environmentalists and nonproliferation experts.

Fast breeder reactors form the backbone of Russia’s “proryv” or “breakthrough” program, which aims to develop reactors that do not produce nuclear waste. In simple terms, these breeders are theoretically designed to burn the spent nuclear fuel they produce, thus closing the nuclear fuel cycle and creating nearly limitless supplies of energy.

But the technology has been hard to perfect. Russia is alone among nuclear nations in actually running fast-breeders with any success. Yet they have still not been able to close the nuclear fuel cycle entirely.

Under the new order, the BN-600 reactor, which began operations in 1981, would continue to function until 2025, at which point the Beloyarsk plant’s operators say it will be evaluated for yet another extension that would see it run until 2040.

The Beloyarsk plant is the site of another fast-breeder reactor, the BN-800, which began commercial operations 2016 after several long delays. The plant also hosts two AMB supercritical water reactors, one of which ceased operations in 1983, the other in 1990.

At the moment, technicians at the plant have been isolated on site to prevent their exposure to the coronavirus, which has driven most of the world’s population indoors and shuttered much of the international economy.

But Rosenergoatom, Russia’s nuclear utility still maintains high hopes for the safety and modernization plan, of which the BN-600’s runtime extension is a part. So far, the modernization plan, which began in 2009 has included the installation of a reactor emergency protection system, an emergency dampening system using an air heat exchanger and a back-up reactor control panel.

In addition, a large amount of work has been carried out on the inspection and replacement of equipment, including the replacement of the reactor’s steam generators.

Yet because commercial power-producing nuclear reactors have only been around for a little more than four decades, the industry can’t make safe bets on their behavior over longer periods of time than that.

In particular, data on how reactor cores – which are largely irreplaceable – age over time is extremely scarce. While certain characteristics of core aging can be simulated in test reactors, such simulations can’t take all variables into account.

Individual national regulatory bodies also set the criteria for whether or not reactors are granted runtime extensions – meaning that what Japan or France consider to be safe grounds for an extension might differ from what Russia or the United States deem safe.

But as the history of Chernobyl and Fukushima show, the fallout from nuclear disasters doesn’t respect international boundaries.

However, because nuclear reactors typically cost billions of dollars to build, there is less incentive to construct new ones to replace the old. But as Chernobyl and Fukushima also showed, such decisions could cost more than the short-term savings they provide.