The staff of at least one nuclear power plant in Russia has been put into isolation due to concerns over the spread of Covid-19, as Rosatom, Russia’s state nuclear corporation, announced a raft of measures to protect the employees of its sprawling domestic and international apparatus.

Published on April 1, 2020 by Charles Digges

Four Russian nuclear workers have tested positive for the coronavirus and the staff of a nuclear power plant has been put into isolation while state nuclear corporation Rosatom implements a raft of measures to protect employees of its sprawling domestic and international apparatus.

As Moscow – and the rest of the world – institutes lockdowns for its citizens, Rostom says it is erring on the side of caution to protect its highly skilled workers against an international pandemic that has infected some 877,000 people around the planet. As of March 31, Russia claims 2,337 of those cases.

On Wednesday, the corporation announced on its website that “as of today, we have four confirmed cases of the illness” Covid-19, the malady caused by the coronavirus.

On Saturday, technicians at the Beloyarsk nuclear power plant, 1,800 kilometers east of Moscow, were put into isolation at a local clinic after the wife of one of the plant’s employees was hospitalized with symptoms of covid-19, the official Tass news agency reported. According to an account in Komsomolskaya Pravda newspaper, the family’s daughter had returned from the United States on March 16, apparently infected with the coronavirus, but asymptomatic.

On Monday, Alexei Likhachev, Rosatom’s CEO said in a video address on the company’s website that he had instituted corporation-wide health checks and sanitation practices at nuclear facilities in Russia, and had sent home all employees who could feasibly work remotely.

But he left broader decisions about staff quarantines up to local authorities, both in the Russian regions where Rosatom operates facilities as well as in foreign countries. 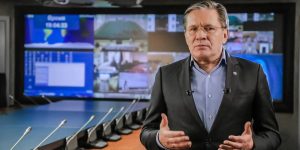 Rosatom CEO Alexei Likhachev speaks in a video address on the company's response to the coronavirus pandemic. Credit: Strana Rosatoma

To that end, he said that Rosatom is continuing the construction of nuclear stations abroad despite the global coronavirus outbreak. But he added that the majority of business trips scheduled for Rosatom employees had been cancelled.

“Ensuring nuclear safety and safeguarding the lives and health of both our employees and the general public has been our first and utmost priority for decades,” Likhachev said in his address. ”We have always had contingency plans for any kind of emergency situations, including those related to the health of our employees.”

The corporation also oversees a number of subsidiaries that are capable of producing components crucial for medical ventilators, which in Russia, as in the rest of the world, are in short supply as the virus continues to spread.

On Tuesday, the technology firm RusAT, which is part of Rosatom, announced it would step up production of the oxygen valves used on medical ventilators by fabricating them with 3D printers, Interfax reported.

Rosatom reported its first staff case of Covid-19 disease on March 19th after an employee of one of its subsidiary companies in St Petersburg positive for coronavirus after visiting a foreign country on vacation. All employees who had contact with her were quarantined.

“Each nuclear power plant has a satellite city and a local structure in the form of clinics, recreation centers and so on where you can temporarily place important technical personnel and isolate them from contact with the outside world,” Zolotkov said.

Indeed, most cities where Russian nuclear power plants are located exist precisely because of the plants. Many require visitors to obtain special permission to visit them, and each have checkpoints and security, which can easily be tightened to keep the virus at bay.

Such seems to be the case at the Beloyarsk plant, where Tass reports the isolated technicians are under round the clock medical supervision, and are brought to and from the pl

Throughout the world, nuclear operators are grappling with the advance of the coronavirus, which causes the Covid-19 illness. Some countries, like the United States, are suggesting that nuclear power plant operators should be isolated on site to prevent their specialized staff from falling ill.

The United Kingdom has already shut down one of its nuclear fuel reprocessing sites after a portion of its technicians were forced to self-isolate after being exposed to the virus.

In France, the Le Hague reprocessing facility has likewise been stalled. And while France’s national operator EDF has refused to comment about the level of absenteeism or the number of confirmed coronavirus infections among its staff, it says its nuclear power plants could operate for three months with a 25 percent reduction in staffing levels and for two to three weeks with 40 percent fewer staff.

Rosatom’s 250,000 employees operate 38 nuclear reactors throughout Russia and staff numerous mining, technological and sales concerns throughout Europe, Asia and the Middle East. The corporation also has 36 power units at different stages of implementation in 12 countries around the world. It is currently constructing seven reactors overseas: two each in Bangladesh, Belarus and India, plus one unit in Turkey.