Days long wildfires near Chernobyl said to be under control

Massive fires raging within the radioactive exclusion zone around the ruined Chernobyl nuclear power plant have largely been contained, authorities said Tuesday, after more than a week of battling the blazes. 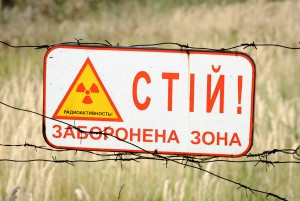 Massive fires raging within the radioactive exclusion zone around the ruined Chernobyl nuclear power plant have largely been contained, authorities said Tuesday, after more than a week of battling the blazes.

“Aerial inspection of the last fires was made today at 7 a.m,’ Anton Gerashchenko, Ukraine’s deputy interior minister, wrote on Facebook, according to the Kyiv Post. ‘Today they will be completely extinguished.”

Some 415 firefighters have been battling the wildfires since April 4 as they engulfed some 20,000 hectares in and around the Chernobyl exclusion zone from which tens of thousands of people were evacuated in the wake of the 1986 nuclear disaster.

Minor spikes in radiation have been recorded within the abandoned areas, but both Ukrainian officials and independent observers have said they pose no danger to human health. No radiation has reached Kiev, 179 kilometers to the plant’s southeast.

“Radiation levels outside the exclusion zone could rise symbolically by a few percentage points, but will not influence human health,” said Sergei Mirny, who participated in liquidating the Chernobyl disaster and now runs tours to the site.

At their height, the fires spread to within two kilometers of Chernobyl’s reactor No 4, which exploded during the catastrophe, and a storage site for dangerous radioactive waste from the plant. But Mirny said that neither of those facilities appear to be in any danger.

On Tuesday morning, Ukraine’s state emergency ministry confirmed that the fires had been contained.

“There is no open fire,” the ministry statement said, adding that there was “a slight smoldering of the forest floor” in separate places.

Wildfires within and around Chernobyl’s exclusion zone are a common phenomenon, occurring on a nearly annual basis and often caused by carless campers and those who burn trash. But Greenpeace said these fires had been the worst seen in years.

The cause of the fires was ruled to be arson. On April 6, authorities said they had arrested a 27-year-old man who confessed that he was burning garbage and dry leaves in the within the exclusion zone.

Andrei Zolotkov, who heads Bellona’s offices in Murmansk, said that despite reports of elevated radiation, the impact of the fires was unlikely to be felt beyond the site of the plant.

“In this situation, there won’t be any release of radioactive substances into the high layers of the atmosphere, and they won’t be transported long distances by wind patters,” he said. “ It is likely that there will be some additional radioactive contamination at the Chernobyl site due to the dispersal of ash and dust particles, but this is not critical.”

The Chernobyl disaster sent radioactive fallout billowing across Europe when its fourth reactor exploded in April of 1986, causing some 116,000 people to evacuate the immediate area surrounding the plant.

To this day, people are not allowed to live within a 30 kilometers radius of the plant. The region has since been taken over by nature, and forest fires are not uncommon. Experts say that the exclusion zone won’t be safe to inhabit for another 24,000 years.

In 2016, an enormous dome was placed over the remains of the fourth reactor, which experts hope will make the site safe for the eventual dismantlement of the ruin.

The disaster zone and the abandoned nuclear workers’ town of Pripyat have in recent years become a popular tourist destination. Interest has only increased since the release of the HBO miniseries Chernobyl, with tour operators reporting as many of 70,000 visitors a year. But as coronavirus spreads, those tours have been canceled.

In 2018, a Ukrainian-German joint venture launched a solar power plant within the exclusion zone. Ukrainian emergency services offered no word on whether the unmanned facility was damaged in the fires.