In one of the more haunting scenes of the HBO miniseries Chernobyl, whose fifth and final episode was aired on Monday, a group of Soviet Army reservists are sent scrambling onto the rooftop of the demolished No 4 reactor days after the April 26, 1986 disaster. 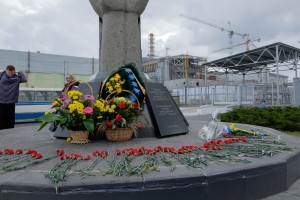 In one of the more haunting scenes of the HBO miniseries Chernobyl, whose fifth and final episode was aired on Monday, a group of Soviet Army reservists are sent scrambling onto the rooftop of the demolished No 4 reactor days after the April 26, 1986 disaster.

As their Geiger counters shriek, the soldiers rush in groups, shovels in hand, to hurl bits of irradiated graphite from the exploded core back down into the reactor’s maw. They are dispatched in 90-second intervals to limit their exposure, one detachment succeeding the next in a lemming-like charge to clear whatever debris they can. We learn that these men are some of the 3,828 who were known as “bio-robots” – human beings sent to do a job so dangerous it fried the circuitry of the actual robots sent before them.

It is a shocking, widely documented moment from the annals of Chernobyl history. But within the HBO production, that, ultimately, is not what strikes you the hardest. It’s what the soldiers are wearing – a crazy amalgam of winter-wear, motorcycle goggles, dish-washing gloves and tin breastplates, all held together by what looks like rubber bands and twine. In other words, a broom closet’s worth of stuff that has no hope of protecting them from radiation.

It’s then that that it begins to dawn on you: The response to the worst nuclear disaster in the history of the world – both in the HBO drama and the reality on which it’s based – were improvised, put together on the fly, and stuck together by spit and string. 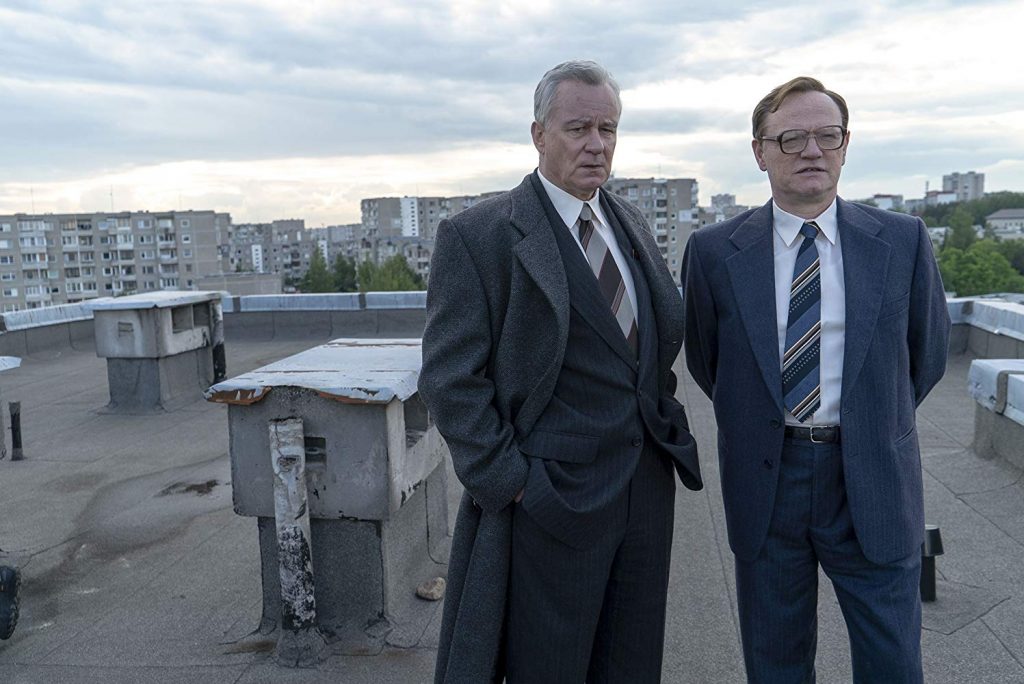 It is on unnerving details like this that the Chernobyl series dwells. As we are shown the hours after the explosion, we see that the dosimeters the plant staff has on hand can’t get accurate radiation readings, leaving them in the dark about how bad things really are. The more accurate ones are locked in a safe to which no one has the key. The phone lines from the control room fail. The civilian firemen called to combat the toxic blaze are unaware that the metallic taste in their mouths means they’re ingesting huge doses of radiation. From a window at the local hospital, two doctors watch the reactor’s flames illuminating the night sky. “Do we stock iodine pills?” one asked the other. “Why would we do that?” comes the incredulous reply. It only gets worse from there,

Shrewdly, the producers of Chernobyl, which is in English, leave some of the sluggish bureaucratic response to the disaster in the original Russian. As Pripyat, the plant’s company town, is finally evacuated three days after the explosion, we hear the order that was actually read over the public address system that day. It is the officious female monotone familiar to any Russian speaker who’s ridden the Moscow metro which overlays the scenes of exodus.

Further afield, we see news of the disaster broadcast to the rest of the country in a real clip off the Soviet nightly news program Vremya from April of 1986. The impassive anchorwoman, known to the entire late Soviet generation, reads an obviously prepared statement from a piece of paper, wanly reassuring us that “measures are being taken to liquidate the accident.”

We are not calmed. Indeed, if Chernobyl does anything, it makes you want to scream at this atmosphere of enforced incompetence and ignorance.

And therein lies its environmental appeal. It throws the viewer into the nuts and bolts process of official denial, bureaucratic incompetence, expedient lies and the squelching of experts that lead to a preventable calamity solvable only by half measures that come far too late.

Sound familiar? For anyone watching the US and Russian response to climate change, it should be. While Vladimir Putin is cheering global warming in hopes of melting the Arctic for year-round shipping, Donald Trump is bumbling along about how it’s a hoax while forming a White House commission to attack the science that proves its exists.

But the strongest point the series makes is not that a disaster like Chernobyl is the responsibility of any one leader. Rather, it takes an entire system to foster such history-altering catastrophe. Valery Legasov, the Soviet nuclear scientist who was appointed to oversee the first months of the Chernobyl cleanup, emerged both in the series and in real life as a hero. But even he lied about the true level of the disaster when the Kremlin dispatched him to the United Nations a few months afterward when an anxious world needed answers about the radiation reaching their own countries.

Not that that should come as any shock. The heroes in such repressive circumstances are always reluctant and conflicted – and often, as was the case with Legasov, nurtured by the very system that is suffocating them. Indeed, if there is one thing the series gets terribly wrong in terms of its understanding of Soviet history, it’s in the reconstruction of Legasov’s own apartment. At the beginning of the first episode, we meet him just prior to his suicide, living in cramped squalor. But Legasov was an esteemed member of the Soviet Academy of Sciences, and hardly lived like this.

Equally inaccurate is notion that he would have been shot unless he told the Central Committee member Boris Shcherbin how a nuclear reactor worked – or for that matter, the fear of being shot that animates so many of the other characters in the series. But summary executions at the behest of a single apparatchik hadn’t been a feature of Soviet life since the 1930s.

But those quibble aside, the indictments offered by the series are clear. They aim at a social machinery that seeks to delude itself about the very facts that will undo it. At a time when the US Department of Energy is official describing fossil fuels as “molecules of freedom” the warning couldn’t be clearer.

One can only hope that, unlike the soldiers at Chernoby  – the series and in real life – we’ll have more to defend ourselves than what we can shake out of a broom closet.