President Vladimir Putin has said there is no threat from a deadly explosion at a secretive military testing range – an event that captured the world’s attention after radiation spikes were reported in its aftermath. 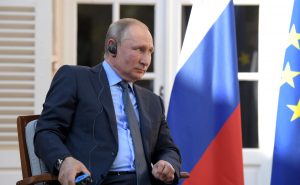 President Vladimir Putin has said there is no threat from a deadly explosion at a secretive military testing range – an event that captured the world’s attention after radiation spikes were reported in its aftermath.

Putin said Monday in France that experts sent to the site on the White Sea are “controlling the situation” and no “serious changes” have been reported, according to the Associated Press.

But he also said that “measures are being taken to ensure that there is nothing unexpected” after the August 8 incident in the Arkhangelsk region. He didn’t elaborate on those measures, or what the experts are measuring or finding.

He added that those who died or were injured in the explosion were performing the “most important national tasks” and will be awarded state medals.

Putin’s remarks represent the first high-profile statements from the Kremlin in the wake of the mysterious accident.

Since the beginning, Russian officials have issued contradictory information about what happened at the test range near Nyonoksa, a village located in the Arkhangelsk region.

The Russian Defense Ministry initially said no radiation had been released in what is suspected to be a missile test gone wrong.

But the city administration in Severodvinsk ­– a port city of 183,000 located about 20 kilometers away from Nyonoksa – reported a brief rise in radiation levels on the day of the mishap.

The Defense Ministry sought to censor that report, but Tuesday, August 13th, Russia’s state weather agency Rosgidromet said that radiation levels had spiked by four to 16 times beyond natural background levels in the city.

The following day, Russian officials announced that Nyonoksa would be evacuated for reasons they refused to spell out. But later that same day, Igor Orlov, governor of the Arkhangelsk region, told the Interfax new agency that the evacuation order was “complete nonsense.”

Staff members at the Arkhangelsk hospital that treated the blast’s victims later complained they had not been warned that their patients had been involved in a radioactive accident, The Moscow Times reported.

According to the independent Russian news site Meduza, the radioactive isotope cesium-137 was detected in the muscle tissue of one of the treating doctors during an examination in a Moscow clinic.

The medical workers involved in treating victims of the mysterious blast – who spoke anonymously with these outlets – told The Moscow Times they had been coerced to sign non-disclosure agreement forbidding them to discuss the accident by the Federal Security Service, or FSB.

Earlier this week, the Comprehensive Nuclear-Test-Ban Treaty Organization said several of Russia’s radiation sensors had been switched off during the time the blast took place, fueling suspicions that Moscow was seeking to obscure the nature of the accident. The monitors came online again on Tuesday, the AP said.

Still unknown is what sort of radioactive device was involved in the blast.

Last year President Vladimir Putin boasted that Russia was testing a cruise missile that would be propelled by a small nuclear reactor, in addition to carrying a nuclear warhead, flying a path too unpredictable to be intercepted. Western analysts called the missile “Skyfall,” and last week, President Trump tweeted that the accident had been a Skyfall exploding.

But Russian officials have not acknowledged this. Instead, Rosatom has said the accident had involved “isotope power sources.” It later offered that the device present at the failed rocket test had been a “nuclear battery.”