Russian military officials have issued conflicting reports this week about whether residents in the area near a mysterious nuclear accident in the Arkhangelsk region should evacuate, suggesting dangers more grave than initially reported. 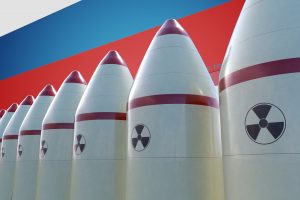 Russian military officials have issued conflicting reports this week about whether residents in the area near a mysterious nuclear accident in the Arkhangelsk region should evacuate, suggesting dangers more grave than initially reported.

The confusing orders came five days after an explosion at a military testing site that killed at least seven people and caused a brief radiation spike in the city of Severodvinsk, which is located near one of Russia’s most important naval bases.

It is still not clear whether the nuclear device involved in the accident was a small-scale nuclear reactor or another type of radiation producing power source. The resulting radioactive fallout was reportedly not dangerous, but was nonetheless anomalous.

Russian officials have been slow dripping information about the incident since it occurred and though the radiation releases were vastly smaller than those that came after Chernobyl, the sluggish and contradictory nature of Moscow’s response has been reminiscent of that 1986 Soviet disaster – and numerous other nuclear mishaps since.

That pattern of murkiness continued this week, as news reports and official statements offered only vague explanations for the evacuation – and hours later seemed to say that it had been called off altogether.

Still, the possibility of evacuating the area raised the question of whether authorities see a continuing threat from Thursday’s explosion or may be preparing to retrieve the radioactive source involved in Tuesday’s accident, potentially posing new dangers.

The evacuation orders, issued for Nyonoksa, a village of about 500 in Russia’s Arkhangelsk region, came Tuesday, according to the 29.ru news portal. That report, later confirmed by Interfax, said the military had instructed residents to leave their village between 5 am and 7 am Wednesday morning.

According to 29.ru, officials told Nyonoksa residents they were ordered to evacuate in conjunction with military work at the testing range that was not related to the mysterious explosions.

TV29, another local news outlet, told local residents to leave on a special train that would be sent to their community, without indicating when it would be safe to return.

But throughout the day, the messaging seemed to waver. Igor Orlov, governor of the Arkhangelsk region, told Interfax the evacuation was “complete nonsense.” Social media channels for residents of Nyonoksa and the nearby Severodvinsk were also giving mixed messages about evacuation.

Several hours after the initial reports about a mandated evacuation, Interfax and 29.ru reported that the military plans had been canceled and that residents no longer needed to leave the area.

Last year President Vladimir Putin boasted that Russia was testing a cruise missile that would be propelled by a small nuclear reactor, in addition to carrying a nuclear warhead, flying a path too unpredictable to be intercepted. Western analysts called the missile “Skyfall,” and on Monday, President Trump tweeted that the accident last week was a Skyfall exploding.

But Russia has not acknowledged whether last Thursday’s accident was related to tests of the new weapon. It likewise remains unclear what sort of nuclear power source was involved.

Rosatom officials quoted in Fontanka.ru, a St Petersburg based news outlet, described the device as a “radioisotope power supply” and a “nuclear battery.” This seems to be consistent with the design of an RTG – or radioisotope thermal electric generator – which, unlike a reactor, doesn’t use a chain reaction but rather converts heat from the natural decay of radioactive materials into electricity

Russia has long RTGs to power remote navigational beacons and instruments aboard spacecraft, where solar batteries are of no use.

But Vyacheslav Solovyev, an official from Sarov, a closed nuclear research city overseen by Rosatom, characterized the power source involved in the explosion as a “small nuclear reactor,” The Moscow Times reported.

Russian statements about the intensity of the radiation release have been equally contradictory. Scientists with the Russian Federal Nuclear Agency said on Sunday that radiation levels had climbed briefly to twice the background level in Severodvinsk, about 40 kilometers from the test site.

But on Tuesday, Russia’s national meteorological agency reported radiation had risen last week to 16 times the norm in that city. No reports indicated the level in Nyonoksa, which is located on the edge of the test range.

Putin’s spokesman, Dmitry Peskov, discussed the accident publicly for the first time on Tuesday, saying that, “all agencies that are competent in this situation are supporting the complete safety of Russian citizens.”

A regional news site, Northern News, reported that doctors at a civilian hospital in Arkhangelsk, the largest city in the region, who first treated victims of the accident, had not been informed of radiation danger.

After treating the patients, the doctors at the Arkhangelsk Regional Clinical Hospital found that their scrubs were causing radiation meters to click, the site reported.

The patients were taken to Moscow and the rooms where they had lain were sealed. Later, said the report, the doctors were also transferred to the capital for medical evaluations. All medical personnel who treated victims of the accident, the site reported, had been made to sign nondisclosure agreements.