Russia’s Norilsk Nickel, the world’s largest producer of palladium and nickel, has been hit with a record $2.1 billion fine over an enormous oil spill last summer that turned two Siberian rivers crimson, jeopardizing a fragile polar environment. In a legal climate that often fails to hold polluters to consistent environmental standards – with predictable consequences for failing to adhere them – the size of the fine is a surprising rebuke to one of Russia’s industrial crown jewels.

Published on February 17, 2021 by Charles Digges 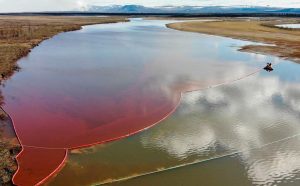 Russia’s Norilsk Nickel, the world’s largest producer of palladium and nickel, has been hit with a record $2.1 billion fine over an enormous oil spill last summer that turned two Siberian rivers crimson, jeopardizing a fragile polar environment. In a legal climate that often fails to hold polluters to consistent environmental standards – with predictable consequences for failing to adhere them – the size of the fine is a surprising rebuke to one of Russia’s industrial crown jewels.

In levying the fine on February 5, Rosprirodnadzor, Russia’s government environmental agency, said that Norilsk Nickel must cover the costs of repairing damage to Arctic waterways and further costs for damage to soil. This week, officials with the company told Russian media they would not appeal the fine, as had earlier been expected.

Bellona hopes the funds will be used toward repairing the grave damage inflicted by the spill, but the organization also fear that Russia’s regulatory structures lack the competence and resolve to prevent similar accidents in the future.

“An enormous fine like this should serve as a deterrent,” said Oskar Njaa, Bellona’s general manager for international affairs. “But levying a fine is a one-off occurrence; changing how you operate is another.

In late May, some 21,000 tons of diesel fuel poured into the Ambarnaya and Daldykan rivers and other surrounding waterways when an aging fuel tank at a Norilsk Nickel subsidiary power plant collapsed near the city of Norilsk, the company’s base inside the Arctic circle in Russia’s Krasnoyarsk region.

The fine dwarfs the 10 billion-ruble ($136 million) cost of cleanup initially suggested by Vladimir Potanin, Russia’s richest man, who is Norilsk Nickel’s controlling shareholder. It also far exceeds the fines that are routinely handed out for environmental violations, which historically have rarely topped a few thousand dollars.

Rusal, the aluminum giant founded by powerful billionaire Oleg Deripaska, owns 25 percent of Norilsk Nickel. The fine could impact the company’s ability to meet its high dividend expectations, much of which flows to Rusal and to Norilsk Nickel itself.

Other large Russian corporations have successfully beat back and lowered fines through the court system for years. According to the Financial Times, the average fine handed to Russian businesses by regulatory officials in 2020 was less than 20,000 rubles – or $272.

By numerous accounts in Russian media, efforts to clean up the disaster were bumbling. President Vladimir Putin declared a federal emergency to address the spill, but in a televised government meeting in early June, he berated local officials, who had only become aware of the accident thanks to postings on social media two days after it occurred.

It has also come to light that emergency services dispatchers based in Norilsk handled notifications about the spill sloppily. Two officials received calls about the growing fuel slick, investigators found, but failed to act on them, leading to significant delays in the response. Both have been charged with criminal negligence, the Regnum Russian newswire reported. Others facing negligence charges include Norilsk’s mayor and a government inspector, Radio Free Europe reported.

Norilsk Nickel itself was also faulted for failing to act quickly in the days following the spill. Alexei Knizhnikov of Russia’s chapter of the WWF called the company’s sluggish response “incomprehensible” during a special Instagram discussion of the accident hosted by Bellona in late June.

But the results of an investigation by Rostekhnador, Russia’s industrial oversight agency, released in November offered a litany of faults in the fuel tank’s construction and highlighted slipshod maintenance practices by NTEK – a state of affairs that had already been noted by many environmentalists and investigative journalists.

According to a June 10 report by Novaya Gazeta, a respected independent newspaper in Russia, officials at Norilsk Nickel had known about the poor condition of the NTEK fuel tank as far back as 2016, when they considered replacing it, but elected not to as a cost saving measure.

Long one of the world’s worst sulfur dioxide emitters, Norilsk Nickel has in recent years embarked on a multi-billion-dollar campaign to improve its ecological practices and reel in its pollution. Most recently, it shut down a number of its nickel smelting furnaces near the Russian border with Norway, which had long been responsible for massive sulfur dioxide output.  A nearby copper smelting works owned by the company is also slated for closure, the Barents Observer reported.

Since the oil spill, Norilsk Nickel has said it plans to boost its cooperation with Russian and foreign researchers focused on the Arctic ecology and permafrost zones to find solutions and improve the industrial safety in the region.