A major oil spill in northern Siberia has prompted Vladimir Putin to declare a state of emergency in an environmentally fragile Arctic region after publically chastising local authorities for their bungled response. 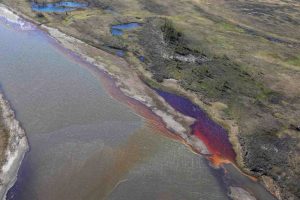 20,000 tons of oil has spilled in a river near Norilsk Russia. Credit: Courtest of krskstate.ru via the Barents Observer.

A major oil spill in northern Siberia has prompted Vladimir Putin to declare a state of emergency in an environmentally fragile Arctic region after publically chastising local authorities for their bungled response.

The spill came as a tank lost pressure and collapsed last Friday in Norilsk in north-central Russia, leaking some 20,000 tons of what officials called “oil products” into the nearby Ambarnaya River – an accident that can likely be chalked up to melting permafrost due to climate change.

The stricken facility, known as the Norilsk-Taimyr Energy Company, or NTEK, is owned by a subsidiary of Norilsk Nickel, whose factories helped make the surrounding area one of the most polluted on earth.

Discussing how news of the spill emerged during a televised meeting on Wednesday, Putin was shocked to discover that local authorities had only learned of the incident from social media two days after it happened. He berated Alexander Uss, governor of the Siberian Krasnoyarsk region, and other officials during a Zoom-style gathering with government bureaucrats.

“Why did government agencies only find out about this two days after the fact?” Putin snapped. “Are we going to learn about emergency situations from social media? Are you alright health wise over there?”

He then supported a proposal to declare a national state of emergency in the area, which will allow for more state resources to assist in the cleanup effort.

Norilsk Nickel, which is the world’s largest nickel and palladium producer, said on its website on Wednesday that “the accident was caused by a sudden sinking of supporting posts in the basement of the storage tank” and that emergency teams “immediately arrived to the site to start clean up works.”

The company said the spill happened in a remote area and that no local communities had been impacted. Media reports said that the leaked oil products, which are mainly diesel fuel, drifted some 12 kilometers from the accident site, turning long stretches of the Ambarnaya River crimson red. In total, Russian state television reported that spill has contaminated a 350 square kilometers.

Russia’s investigative committee, which deals with severe crimes, has launched three separate probes into the accident. NTEK’s director Vyacheslav Starostin has been taken into custody until July 31, but had not yet been charged.

The details of the spill suggest that climate change could have played a role. For years, experts have worried that rising global temperatures are reducing the cover of permafrost – the ice and soil combination that makes up some 60 percent of Russia’s land mass.

A 2018 report by Rosgidromet, Russia’s weather agency, sounded precisely that alarm, saying that melting permafrost due to climate change could threaten tens of billions of dollars worth of mining infrastructure and other industrial centers that have been built over decades on Siberia’s frozen soil.

In some places, like north-central the Yamal Peninsula ­– home to massive natural gas recovery operations – Rosgidromet says permafrost levels had declined by as much as 26 centimeters. Nadym, an oil producing settlement in northwestern Siberia, has seen its permafrost shrink by 38 centimeters.

And Norilsk – where Friday’s spill occurred has seen its permafrost reduced by a full 22 percent.

The incident has prompted stark warnings from environmentalists, who say the scale of the spill and geography of the river mean it will be difficult to clean up.

Oleg Mitvol, former deputy head of Russia’s environmental watchdog Rosprirodnadzor, told the BBC there had “never been such an accident in the Arctic zone.” He said the cleanup could take as long as 10 years and cost as much as $1.5 billion.

Officials told Putin during Wednesday’s televised meeting that the Ambarnaya River is too shallow to use barges to sop up the spill and that the remote region has no roads.

Natural resources minister Dmitry Kobylkin warned against trying to burn off such a vast quantity of fuel oil, and proposed trying to dilute the diesel fuel – which sinks more slowly than crude oil – with dispersants. Only the emergencies ministry with military support could deal with the pollution, he said.

When Kobylkin suggested pumping the slick into the adjacent tundra Putin conceded that the soil there was “probably saturated” with oil.

While Norilsk Nickel has announced a mutli-billion dollar campaign to overhaul facilities and bring them up to environmental specifications, it has nonetheless struggled with similar spills.

In 2016 it admitted responsibility for a spill that turned another nearby river red. The company had initially denied culpability for the incident, but reversed itself several days later.