In a sign the Kremlin might be taking global warming more seriously, President Vladimir Putin has called the vast wildfires that have lashed Siberia this summer the work of climate change during a meeting of his cabinet last week. 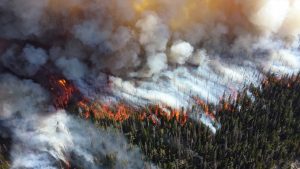 In a sign the Kremlin might be taking global warming more seriously, President Vladimir Putin has called the vast wildfires that have lashed Siberia this summer the work of climate change during a meeting of his cabinet last week.

For more than a month, wildfires have blazed across Yakutia, Russia’s largest and coldest region on Siberia’s eastern flank, turning more than a million and a half hectares of forests into smoldering matchsticks.  Thick smoke has blanketed the regional capital of Yakutsk, driving residents indoors under warnings of bad air quality and causing airport shutdowns due to poor visibility.

At last Thursday’s cabinet meeting, according to the official Tass newswire, Putin addressed the staggering scale of the fires, saying they were “if not entirely, then at least to a large extent, this is due to global climate change in our nation.”

He added that over the past 44 years, Russia’s temperature has been ticking up at 2.8 times the rate of worldwide averages, threatening to melt the permafrost that covers 65% of Russia’s territory.

The comments represent a shift in rhetoric from Putin, who in the past has cast doubt on the role climate change is playing in Russia’s severe heat, floods and nearly annual bouts with record-setting wildfires. Previously, the Russian leader has made headlines questioning the science behind climate change, saying its causes were due to natural, even “cosmic” phenomena beyond humanity’s control.

He has likewise banked heavily on Arctic melt by initiating a huge buildout along Russia’s northern Siberian coast and decreeing massive increases in shipping traffic along the Northern Sea Route, a polar artery linking Europe to Asia.

Rosatom, Russia’s state nuclear corporation, has been put in charge of developing a sweeping infrastructure throughout the Arctic in order to facilitate access to oil and gas fields.

But recent reports from Putin’s own ministries have emphasized how much Russia stands to lose as global temperatures rise and weather swings to extremes.

In June, Alexander Kozlov, Russia’s minister of natural resources and ecology, warned that the economy will lose some $65 billion in infrastructure due to thawing permafrost brought about by climate change.  Higher temperatures threaten 75,000 kilometers worth of oil and gas pipelines that are built on foundations of frozen soil.

By Kozlov’s estimates, some 40 percent of all infrastructure built on permafrost-covered land has already been damaged. The dangers aren’t confined to structural damage. As permafrost thaws, it releases vast stores of methane and carbon dioxide – the gasses most responsible for global warming – driving up temperatures even more.

Yet, while Russia’s parliament has passed legislation aimed at tracking industrial emissions, Moscow’s commitment to shifting to cleaner energy sources is virtually nonexistent. Moscow’s long-term climate strategy forecasts continued reliance on fossil fuels for as much as 57 percent of the country’s energy mix by as late as 2050 – the year by which many major economies plan to be carbon free.

Still, climate leaders in Washington, who are seeking to reset the American role in climate negotiations after a four-year Trump-imposed absence, are encouraged by Putin’s new tone.

In July, Putin told former US Secretary of State John Kerry, who serves as President Joe Biden’s climate change envoy, that the two nations would have to work together on tackling global warming.

Responding to Putin, Kerry said, “we are pleased that Russia wants now to take steps, additional steps, because your country is impacted [by climate change], obviously. And we believe that there is space for us to cooperate on this.”