The Russian economy stands to lose more than $67 billion by 2050 thanks to melting permafrost due to climate change, which threatens the foundations of much of the country’s infrastructure, Alexander Kozlov, minister of natural resources and ecology told an environmental conference last week. 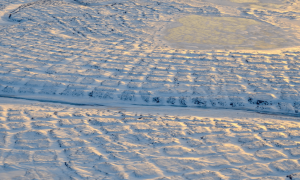 The Russian economy stands to lose more than $67 billion by 2050 thanks to melting  permafrost due to climate change, which threatens the foundations of much of the country’s infrastructure, Alexander Kozlov, minister of natural resources and ecology told an environmental conference last week.

His remarks came at the 9th Nevsky International Ecological Congress in St Petersburg and offered one of the few – but increasingly more frequent – stark warnings about climate change Russian officials have recently offered.

Some 65 percent of Russia’s enormous landmass is covered in permafrost – the mixture of ice and soil that stays frozen all year round in layers that are often thousands of years old. But climate change and rising temperatures, which Russia is experiencing faster that many countries, is taking a toll on that super chilled earth, often with disastrous effects for Russia’s extensive Siberian infrastructure and industry.

This comes as especially as bad news to much of Russia’s extractive industries, which have stitched some 75,000 kilometers of oil and gas pipelines across this now-melting foundation. Alongside those are the towns and cities that have sprung up around the industry and the road and trail lines connecting them.

“There are problems with building new railway lines and roads,” Kozlov said, according to The Moscow Times. “[We estimate] that more than 40% of buildings and infrastructure facilities in permafrost-covered areas have already been damaged,” the minister said.

What’s more, Kozlov told the gathering, is that the expanding effects of this melt are poorly understood within the government apparatus, where the most recent mapping of permafrost environments date back to the 1980s, and engineering surveys that might assist policymakers to guard against damage are often hidden behind commercial secrecy clauses.

“In present day Russia, practically no permafrost work is being carried out,” said Kozlov. “No one is studying the experience of building and operating cities, there is no exchange of geological information between departments.”

He added that at current, the monitoring of permafrost conditions falls well short of Russia’s Arctic development program, which has entailed a massive economic realignment toward fossil fuel projects on Siberia’s northern coast, as well as commercial shipping along a polar artery called the Northern Sea Route.

It was only last year, Kozlov reported, that the Ministry for the Development of the Far East and the Arctic – which oversees the sprawling expansion – conducted permafrost studied. The results were disappointing.

Aside from the cost and damage to already existing infrastructure, the study found that around 23% of technical failures and 29% of loss in fossil fuel extraction are caused by permafrost degradation. It also reached the startling conclusion that some 70 percent of all current Arctic infrastructure is at potential risk. That included 45 % of all of Russia’s oil and gas projects, 36,000 buildings, and dozens of airports, including military ones, are in dange

The dangers aren’t confined to structural damage. As permafrost thaws, it releases vast stores of methane and carbon dioxide – the gas most responsible for global warming –then driving up temperatures even more.

That report states that, because of this melting process, the Arctic is now contributing some 1.1 billion to 2.2 billion metric tons of carbon dioxide annually to the world’s atmosphere. That’s equal to the yearly carbon contribution of countries like Japan, on the lower end, and Russia itself, on the higher end.

The Natural Resources and Environment Ministry aims to create a system for monitoring climate-induced permafrost damage, the Times report noted. By July 30 the State Duma is expected to receive the bill from the ministry to create the system. By 2024 the government hopes to work out technologies and methods for permafrost observation.