Carbon leakage is a term used to describe situations where, as a result of costs incurred from the implementation of climate policies, certain businesses relocate production to countries with less stringent (or no) climate policies in place. The European Commission has carried out a public consultation on the different options for a system to avoid carbon leakage after 2020 for sectors covered by the EU ETS. The results of this consultation will feed into further work on the 2030 Climate and Energy Policy Framework regarding the determination of post-2020 rules on free allocation and carbon leakage provisions in the EU ETS. Bellona’s views and recommendations are outlined in this response. 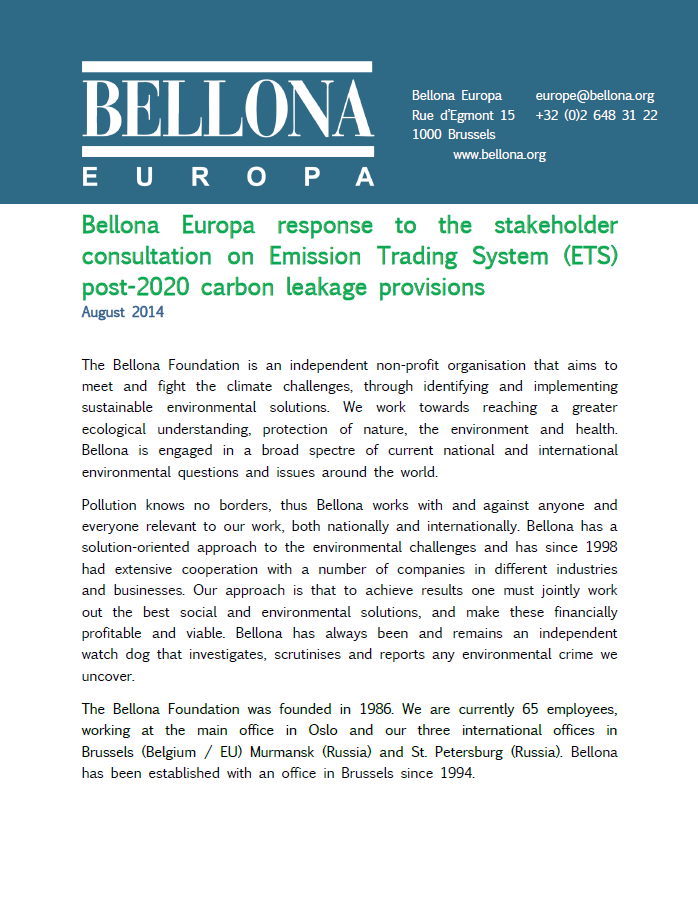 The granting of a higher share of free allowances to sectors in the EU ETS, deemed to be exposed to a significant risk of carbon leakage, has had a number of negative consequences for the well-functioning of the scheme. Free allocation has resulted in an allowance oversupply on the market and depressed the EUAs price, thereby undermining incentives for energy efficiency improvements needed to safeguard European industrial competitiveness. In addition, evidence from the first two trading periods shows that free allocation has led to lowered production and earlier than planned installation closure, as well as windfall profits to power companies who have passed on the cost of EUAs through product prices. Moreover, the eligibility criteria employed by the European Commission for the calculation of carbon leakage exposure, namely carbon costs and trade intensity, have been largely overestimated and based on misleading assumptions.

In the absence of an international agreement and a level playing field between the EU and its trading partners, ensuring protection of the EU’s industrial competitiveness is essential. Bellona regards innovation and investment in low-carbon technologies, such as CO2 Capture and Storage (CCS) as the most effective means of addressing carbon leakage concerns in the long-run. For many industrial sectors CCS is the only available technology which allows for deep CO2 emission reductions. CCS deployment in Europe will also create and secure an estimated total of 330,000 jobs in fuel supply, CCS equipment manufacture, plant operation and CO2 storage facility operation. Bellona, therefore, strongly promotes CCS for industry as it can enable the reconciliation of the EU’s climate change mitigation and re-industrialisation objectives

Driving the deployment of shared projects and infrastructure of EU relevance will, however, greatly depend on clear and predictable incentives for EU energy and industrial sectors.

Bellona recommends a substantially higher share of the post-2020 allowance budget than in Phase 3 to be dedicated in particular to the support of large-scale CCS demonstration projects under the NER300 programme to provide extra support to first movers.