COMMENT: He did it again: Putin renews vows to build more reactors on eve of Chernobyl anniversary

MOSCOW – Just one day before Russia, Ukraine, Belarus – and, indeed, many across the rest of the world – remembered the victims of the April 26, 1986 catastrophe at Ukraine’s Chernobyl Nuclear Power Plant – Russia’s President Vladimir Putin reiterated plans for building 25 new nuclear reactors. The following day, UN Secretary-General Ban Ki-moon talked about the plight of 330,000 people displaced by the tragedy, and the suffering of millions still residing on affected territories. The UN’s secretary general must be better informed of Chernobyl’s effects – or is he simply more humane than Putin?

Published on May 7, 2013 by Andrey Ozharovsky, translated by Maria Kaminskaya 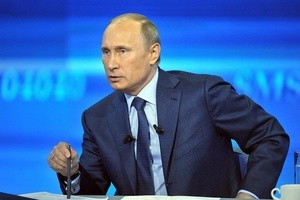 On April 26, 1986, the fourth unit of Chernobyl Nuclear Power Plant, in what was then the Soviet republic of Ukraine, exploded, instantly rendering uninhabitable thousands of square kilometers and sending a deadly plume of radioactive fallout across vast expanses of Ukraine, Belarus, and Russia all the way to Western and Northern Europe. Each April 26, Russia remembers victims of radiation accidents and people who have sacrificed their health and lives cleaning up the consequences of this and other radiation disasters. On April 25, 2013, speaking live during his traditional Direct Line talk with the 142 million nation – a broadcast that lasted 4 hours and 47 minutes and was carried by several major Russian TV and radio stations – Putin declared Russia was going to have 25 new nuclear reactors.

“We have new businesses in the electric power industry, including in the nuclear energy sector,” Putin said, as per the translated transcript available on the president’s website at Kremlin.Ru. Putin was answering a question about how he was planning to create 25 million new jobs, one of altogether 85 questions he was asked during his broadcast.

“Our objective is to launch almost the same number of power stations as had been built in the entire period of Soviet nuclear power industry,” Putin went on. “They had put up 28 large [units], and our target is around 25. [Building, of course,] on what was achieved in the Soviet era.”

Yes, he has that right. It was during the Soviet era that most of the 33 nuclear reactors currently in operation in Russia were built. Also during the Soviet time, the fourth unit of Chernobyl NPP was built, in 1983, and exploded three years later. Also, as a fact not entirely irrelevant to the subject at hand: Eleven aged Chernobyl-type reactors – one of which is currently undergoing repairs and may never come back online – continue to be in operation at three nuclear power plants in Russia.

Building new nuclear reactors on a scale that would match the accomplishments of the Soviet nuclear industry is a dream long fostered by the Russian State Atomic Energy Corporation Rosatom. In fact, there is not much else that Rosatom knows how to do, other than build nuclear reactors – and that, pretty much at the Russian taxpayer’s expense. Why it is that the head of executive power chooses to offer his undying political support of the nuclear industry – endorsements that translate into billions of dollars of Russia’s federal funding funneled into the corporation’s coffers – is an open question. Alas, it did not become the 86th posed to Putin during the April 25 broadcast.

Maybe, the reason is that even though the purported goal of such marathon tête-à-têtes with the nation is for the president to tap directly into the Russians’ sentiments, hopes, and concerns, decisions that affect environmental well-being of the Russian population are routinely made with no regard paid to the opinion of independent experts, or that of the general public. Countries where questions about nuclear power were allowed to be part of vigorous public debate, including via national referendums – Austria, Italy, Germany, Lithuania – opted out of new nuclear construction. In Russia, one has little prospect of even participating in a public hearing on a new reactor project, much less of a meaningful dialogue on its merits.

A déjà-vu all over again

Notably, this was not the first time that Putin has spoken in support of the nuclear industry just as another anniversary of Chernobyl was coming up. In mid-April of 2009, during a visit to Kalinin Nuclear Power Plant in the town of Udomlya, some 200 kilometers northwest of Moscow, the then prime minister Putin restated his allegiance to the nuclear industry (quoted here as per the official translation of the transcript):

“By 2030, nuclear power plants should account for 25% to 30% of electricity produced in the country. The current figure is 16%. The relevant figure exceeds 25% and even 30% in many European countries, so we will have to catch up with industrialized states.”

Of course, that was before yet another nuclear disaster – the March 2011 catastrophe at Japan’s Fukushima Daiichi Power Plant – reminded countries such as Germany, which then made the decision to close down eight of its nuclear power plants immediately and nine more before 2022, phasing out nuclear energy completely, that Chernobyl’s lesson was one the world cannot afford to forget.

“These are challenging plans that require hard work, but the goal is quite realistic, Putin said then. “[..] No matter what unfolds, we must fulfill the task I have just mentioned. This means that we must build 26 reactors if we want to raise the sector’s contribution to 25%-30%.”

Two completed reactor units have been launched since 2009 – Unit 4 at Kalinin Nuclear Power Plant and Unit 2 at Rostov Nuclear Power Plant, in Southern European Russia. One thing to keep in mind, however, is sheer construction periods, which – even without taking external factors like a dire economy or bureaucratic issues, or Russia’s corruption, into consideration – take far more than one reactor every two years.

Bøhmer’s figures are corroborated by several independent nuclear industry observers: The Hass School of Business at the University of California, Berkeley issued a 2012 report citing average reactor build times of between 7 and 12 years.

The Bulletin of Atomic Scientists further cited in 2008 that 11 of some 30 reactors listed as “under construction” by the International Atomic Energy Agency had been as such for more than 20 years. Since then, only one of these 11 has been completed: The Bushehr reactor in Iran.

Bushehr was begun in 1975 by German industrial giant Siemens, which withdrew from the project during Iran’s Islamic Revolution in 1979. It was picked up again in 1995 by Rosatom’s (then Minatom’s) foreign reactor construction wing, Atomstroiexport, and went on line in 2011, for a total construction time of 36 years.

Watts Bar Unit 2 in the US state of Tennessee began construction in 1973. The Tennessee Valley authority (TVA) halted construction 1988, when the reactor was about 80% complete, because of decreased energy demands. TVA approved resumption of construction in 2007, but the project ran into budget overruns and lagging construction schedules. Last month, the TVA announced the unit would be completed by 2015. When it comes online, it will have been under off and on construction for 42 years.

All of this suggests that external circumstances cited for delays are certainly not the exception, but the rule. Putin, who hopes to build 25 new reactors before 2030 – taking online 1.5 reactors each year – would do well to remember the history of the industry that he so extols: Construction on the completed Rostov reactor, which began commercial operation in December 2009, started in 1983 (26 years). The first brick at Kalinin’s Unit 4, which was connected to the grid in December 2011, was laid in 1986 (25 years).

Going contrary to global tendency – to what end?

And there are no sane reasons why – in defiance of a global trend that sees the share of nuclear power decreasing – Russia would remain so steadfast in its pursuit of a dead-end goal.

There seems to be even less rationale to support Russia’s obstinate chase after nuclear build-up given the industry’s less than perfect economics.

Issues of economic performance that make nuclear generation a dubious candidate for an investment portfolio are in fact part of the background explaining the dwindling share of nuclear capacities in the world, along with the technological and environmental problems linked with unacceptable risks and immense damage wrought by radiation accidents. Prolonged outages caused by unplanned repairs and maintenance compound profitability risks. According to Rosatom’s information, as of April 26, 2013, a third of Russia’s nuclear reactors were in downtime:

“Of the 33 reactor units in operation, 23, with a combined capacity of 16,027 [megawatts], remain online, 1 reactor unit is in no-load mode, 1 unit remains in reserve, and 8 are under maintenance,” said data from Rosatom’s Crisis Management Center, which keeps track of the situation at Rosatom enterprises and collects and analyses information, among other functions. 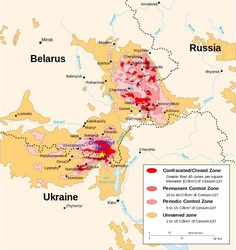 Still, the deepest, and hardly unfounded, concerns that make many governments feel uncomfortable about continuing to develop nuclear power are not its economics but the risk of another tragedy comparable to Chernobyl or Fukushima. Furthermore, Putin himself surely does not consider the Chernobyl disaster an occurrence trivial enough to be nonchalant about. Just a few weeks ago, speaking about the North Korean nuclear issue at the April 8 press conference in Hannover following a working visit to Germany, Putin said (quoted as per the official transcript):

“I do not hide the fact that we are concerned about the escalation on the Korean Peninsula because we are neighbours. If something were to happen it might make Chernobyl, the consequences of which we know full well, pale in comparison.”

Obviously, Putin does not subscribe to a view not uncommon among some ardent nuclear proponents who insist that only a few dozen people died as a result of the Chernobyl disaster. He knows well the effects of the catastrophe, but he does not particularly like to talk about it.

This, in other words, was a sound bite offered in Germany. But the official policy reserved for internal consumption seems to be one of pointed understatement, under-compensating the liquidators and victims of this and other radiation disasters, and underrating the impact the nuclear industry’s dreadful accidents have on the population.

After all, Putin could have used his Direct Line broadcast of April 25 to commemorate the Chernobyl catastrophe, but he didn’t mention it.

The suffering of millions

One example of a vastly more sensitive approach to Chernobyl’s lasting legacy was offered in a statement that came on the 27th anniversary of the disaster from UN Secretary-General Ban Ki-moon. Ban Ki-moon stressed that the impact of the Chernobyl disaster must never be forgotten and called for continued international assistance for the people and regions affected, a report posted on the UN News Center said, citing the statement, issued by the secretary-general’s press office.

“As we today mark 27 years after the Chernobyl disaster, we honour the emergency workers who risked their lives responding to the accident, the more than 330,000 people uprooted from their homes and the millions of people living in contaminated areas who have long been traumatized by lingering fears about their health and livelihoods. The countless women, men and children affected by radioactive contamination must never be forgotten,” the statement said.

Ban Ki-moon noted that “the affected area is still suffering from the impact of the accident. Environmental damage to food chains, land and water will in many cases last for years.”

Ban Ki-moon, who in 2011 became the first United Nations Secretary-General to visit the Chernobyl site, the UN News Center report said, reiterated the UN’s commitment “to stand by those affected by the Chernobyl disaster, and to work for greater nuclear safety and sustainable energy worldwide.“

“Those coping with the consequences of the Chernobyl disaster are demonstrating great resilience. But they continue to need support,” the statement said.

It’s just too sad that on the eve of another Chernobyl commemoration day, Putin again chose the nuclear industry – not the victims of nuclear and radiation disasters – to pledge his support and commitment to.

Maria Kaminskaya and Charles Digges contributed reporting to this comment.