“Compliance with new Ship Recycling regulation should be linked to tonnage tax for shipping companies, ” says Paal Frisvold, Chairman of Bellona Europa, a founding member of the NGO Shipbreaking Platform

The new system proposed in the Ship recycling regulation builds upon the IMO Hong Kong Convention for the safe and environmentally sound recycling of ships. The Convention was adopted in 2009, however in order to enter into force it has to be ratified by 15 countries representing 40% of the world’s gross tonnage, which is unlikely to happen before 2020.

“Nowadays, the EU ship owning companies benefit greatly from tax–free regime under the state aid guide lens of the EU. Making the granting of aid conditional on compliance with strict safety and environmental requirements is the only way that can guarantee swift adherence by shipping companies to international standards. This will also prevent re-flagging to open registers outside the EU and  the positive re-flagging trend achieved by the Maritime Guidelines,”- Frisvold explains.

European ships will be allowed to be recycled only in facilities on that list. Some of the requirements to be met by the ship recycling facilities are stricter than those of the Hong Kong Convention. The new proposal would oblige the ship-owners to report to national authorities when they send a ship for recycling.

With this data the authorities, who will also be responsible for issuing the inventory certificates, will be able to easily spot and sanction illegal recycling. The sanctions proposed in the Regulation are also more specific than those provided for in the Hong Kong Convention

“This proposal would guarantee better traceability for European ships,” says Frisvold. “Bellona specifically welcomes the fact that the European Parliament’s report made explicit that the requirements for ship recycling facilities need to go beyond those of the Hong Kong Convention. The standards of the Convention fall far short of the EU standards. For example,  they would still allow ships to be dismantled on beaches,” – he explains.

However, stricter regulation alone will result in EU ship-owners flagging out to avoid the costs. The Commission already has tools at hand to counteract such practices. It can use a simple ‘stick and carrot’ approach – making the grant of the state aid conditional upon compliance with the ‘stick’ of the stricter regulation.

“The revision of the state aid guidelines on Maritime Transport, due in 2013, now offers  a possibility for such an improvement. In any case, the services of DG Environment and DG Competition should cooperate closely to make sure that compliance with environmental legislation is taken into account when state aid grant assessment is being made on national level, “- Frisvold explains. 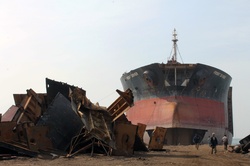