On 5 March 2015 European policy makers and experts in the field of electromobility met at the Norway Mission to the EU to discuss key challenges and the way forward for clean transport and alternative fuels in Europe. This event comes after the release of the European Commission’s Energy Union Strategy, which calls on Europe to speed up the electrification of its car fleet and become a leader in electromobility. By showcasing the Norwegian experience in overcoming regulatory and financial barriers to electric vehicle (EV) deployment, this event looked at how the success story can be replicated in the EU. 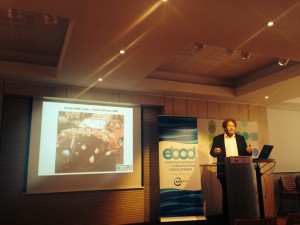 Bellona’s President Frederic Hauge, having imported Norway’s first EV in 1989, shared the story of Bellona’s activist efforts in fostering the adoption of the country’s first incentives to EVs in 1990. Today, 25 years later, Norway has the highest penetration of EVs in the world.

To learn more about Bellona’s history in initiating the electromobility movement and adoption of EV-friendly policies in Norway read the Bellona Brief – Electric Vehicles: The Norwegian Experience in Overcoming Barriers.

The EV incentives scheme, composed of both push- and pull-factors, has rendered EV-ownership a cost-saving opportunity in relation to their fossil fuel-counterparts. Hauge also underlined the significant impact EV batteries will have on electricity markets, when used for the storage of renewable energy. (To learn more read Bellona’s brief ‘The disruptive world of large scale energy storage’).

These words formed part the introductory speech by Norway’s Minister for Climate and Environment, Tine Sundtoft, who highlighted the taxation system put in place by the government as crucial in having enabled the widespread uptake of EVs in Norway. Moreover, in order to build consumer confidence in EVs the government has guaranteed a range of financial incentives to EV-buyers in the form of exemption from high rates of purchase tax and VAT, exemption from road and ferry tolls, free parking in public charging spots as well as the possibility to drive in bus lanes.

The Minister also noted that governments should play an important role in building the necessary re-charging infrastructure for EVs, as a guarantee for car manufacturers’ having invested into making EVs available on the market.

“Need for a top-down mandate and a bottom-up adoption”

This was the key message delivered by Olivier Paturet, General Manager for Zero Emission Strategy at Nissan Europe. Paturet highlighted the importance of placing consumers at the center of the electromobility initiative, and the need for EV-incentives to be seen as a community-wide investment rather than as a sunk cost.

The importance of seeing citizens as key drivers of electromobility was also underlined by Hugues Van Honacker, Senior Expert in Electric Mobility from DG Transport of the European Commission. He pointed to the importance of raising consumer awareness of the cost-saving and environmental benefits offered by EVs.

While the overall picture in the EU is less positive than in Norway, momentum has been building and a number of decisive pieces of legislation will be formulated in the coming years.

Van Honacker also announced the Sustainable Transport Forum to be taking place later this year. The forum will aim to facilitate the preparation of national plans, as mandated by the recently adopted Alternative Fuels Directive. The Directive requires EU Member States to draw up national plans for the market development of alternative fuels and their infrastructure by the end of 2015. The establishment of EU-wide standardised re-charging infrastructure is a key pre-condition for the large-scale deployment of EVs in Europe.

Greg Archer, Programme Manager for Clean Vehicles at Transport & Environment, noted that while EVs are without a doubt an important factor in the decarbonisation of our economies, electrification should focus on all other modes of transport, including rail and bikes. Moreover, he argued that attaining a wider deployment of EVs would necessitate a shift to more sharing, and less ownership of vehicles.

“We only have one planet, let’s live on it as if we mean to stay”

These words concluded the presentation of Green MEP Keith Taylor. Taylor underlined that the transport sector is one of the main sources of air pollution, which in turn is a firmly established cause for mortality and respiratory diseases. Poor air quality yearly causes half a million premature deaths in the EU. Combatting air pollution and climate change will be impossible without the widespread uptake of EVs. Taylor, moreover, argued for the need to promote non-motorised modes of transport, such as walking and cycling.