Another brick in the Barents Baltic Electric Road has been laid in Teriberka, a village on the Barents Sea popular with tourists and the setting of the 2014 Russian blockbuster Leviathan, with the opening of an electric car charging station.

Published on November 1, 2021 by Anna Kireeva, translated by Charles Digges 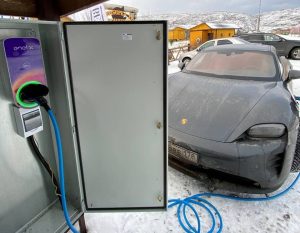 Another brick in the Barents Baltic Electric Road has been laid in Teriberka, a village on the Barents Sea popular with tourists and the setting of the 2014 Russian blockbuster Leviathan, with the opening of an electric car charging station.

The station was installed by Enel X Rus, the Russian wing of Italian energy giant Enel, as part of a Bellona-driven project to establish an EV infrastructure connecting St Petersburg to Teriberka via Petrozavodsk and Murmansk.

Located 140 kilometers east of Murmansk, Russia’s Arctic capital, Teriberka is one of the few spots drivers in European Russia can reach the shores of the Barents Sea by car. Ever since Leviathan’s dark social commentary exploded through Russian cinemas, the natural beauty of the film’s backdrop has been a draw to tourists.

The JuiceBox charging station is a compact AC charger controlled by a software platform with a mobile app. One hour of charge is enough for about 50-100 km. The station can be used at temperatures from minus 40 to plus 60 degrees Celsius – a huge benefit in the harsh Arctic weather of the Kola Peninsula. The charger’s housing is made from recycled plastic waste, which itself can be recycled when it’s replaced.

According to Stefan Zvegintsov, head of Enel Russia – whose Enel X Rus subsidiary is also launching a windfarm near Teriberka – the Murmansk region is bursting with low carbon electricity solutions for environmentally-friendly transport.

“I am very pleased that, together with colleagues from Bellona, ​​we are not only contributing to the implementation of a charging station corridor connecting the shores of the Barents and Baltic Seas, but also contributing to the implementation of the concept for the development of production and use of electric road transport, approved by the Government of the Russian Federation.,” Zvegintsov said in remarks at the charging station’s opening.

In 2016, Bellona and the Government of the Murmansk Region signed a memorandum of cooperation aimed at developing EV charging infrastructure in Northwest Russia, calling the project the “Arctic Electric Road.” Building on the success of the charger Bellona donated to Murmansk in 2017, yet another charger was installed in the town of Zapolyarny – an important stop for any motorist headed to or from Norway.

The Murmansk charger – which marked Russia’s Year of the Environment – was greeted as a curious novelty at the time. But in recent months, the Russian government has made its first concerted effort toward supporting electric vehicles and the infrastructure to support them.

The ”Concept,” published by the Cabinet of Ministers, aims to put as many as 25,000 electric cars on Russian roads by 2024, supported by 9,000 charging stations.

According to Yuri Sergeyev, energy and electric mobility advisor with Bellona’s Murmansk office, the new charging station’s opening in Teriberka is a landmark even. 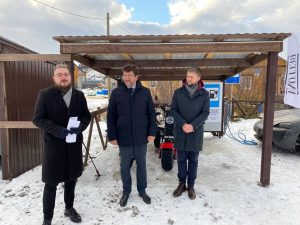 He said that the three-year Barents-Baltic Electric Road project has already attracted the attention of the Government and investors.

“At the end of November we plan to present the results of the project roadmap,” he said. “A number of cooperation agreements have already been signed with potential investors. We can say that this is the beginning of a long journey. ”

He stressed that Russia, like the whole world, is moving towards the development of electric transport: sales of electric vehicles are growing, infrastructure is developing, there are more tourists who come by electric vehicles to remote areas of our country even in the absence of developed infrastructure. Indeed, Bellona has already reported on many adventurous drivers who are doing exactly that.

“We hope that the implementation of the BBER project will increase both the internal and external flow of tourists on electric vehicles, which will increase interest in environmentally friendly transport and will contribute to a massive transition to electric vehicles,” said Sergeyev. “This transition is an important part of the decarbonization process, and Bellona is pleased that, together with its partners, it is contributing to the fight against climate change.”

Deputy Chairman of the Murmansk Regional Duma Yevgeny Nikora noted at the station opening ceremony that tens of thousands of tourists come to Teriberka every year, and expressed confidence that more and more of them, and not only from Norway, where individual electric transport already prevails, but also from Russia will come by electric vehicles.

“Confirmation of our interest in the development of this type of transport is the project of launching an electric bus from Norway, which will also be able to reach Teriberka,” said Nikora. “ I am sure that in five years we will see a different picture with the spread of electric transport in our country. Therefore, it is important that we take this step here and today, and I urge our colleagues from Karelia and the Leningrad region to continue this work.”

Enel X Rus says it will continue to work on the development of EV charging infrastructure in Russia. Today, 20 Enel X Rus charging stations operate throughout the country, from Murmansk to Moscow, Chelyabinsk, Novosibirsk, Krasnoyarsk, Gorno-Altaisk and the Far East.