Published on October 22, 2021 by Anna Kireeva, translated by Charles Digges 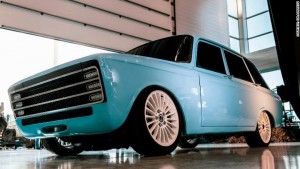 The Russian government has announced a program geared toward producing electric vehicles and the infrastructure to keep them charged, all while giving their owners a financial incentive to buy them – so long as the EV is made in Russia.

The program dovetails with a new push from President Vladimir Putin to nudge the country toward carbon neutrality by 2060 – a pledge he unveiled last week at an energy forum in Moscow. While the Russian president has been a notorious climate skeptic, his tune has changed recently as the European Union mulls taxing imports from heavily polluting countries.

The carbon neutrality pledge follows an earlier ambitious step in June, when Putin ordered his government to develop a plan to cut carbon emissions to below the level of the European Union by 2050.

The new EV program – called a government “concept,” would bring Russia closer in line with its neighbors in Europe – where electric car sales rival, and in some cases surpass – the sale of conventionally powered automobiles.

The last decade has seen electric vehicles make a splash, growing from no sales in 2010 to 11 million in 2020 as various world nations strive to reel in carbon emissions from the transportation sector. The International Energy Agency has urged the sales, saying 230 million EVs must be on the road by 2030 for the world to avert the worst effects of climate change.

The world leader in sales is China, with 4.5 million EVs on Chinese roads, which is part of Bejing’s plan to achieve net zero carbon emissions by 2060. Next is the EU, with 1.4 million in EV sales last year.

Russia’s statistics are modest by comparison – but the growth rates in sales are explosive. As of the beginning of the year, according to Russia automotive agency AUTOSTAT, there are 10,836 electric vehicles registered in the country – representing a 71% increase over last year.

Indeed, by 2030, many major automakers will cease production of cars running on internal combustion engines.

In an apparent nod to this new reality, the Russian government’s “concept” devises a strategy to produce and deploy electric cars on Russian roads over the next nine years.

It is time for the state to “integrate into the global automotive industry at a new technological level” and become an “active participant” in the electric transport market, the Cabinet of Ministers said in the concept.

Among the tasks of the Concept are not only developing native electric vehicle production, but stimulating demand for them. That will involve a focus on infrastructure like charging stations and after-sales service, as well as eliminating regulatory barriers to electric vehicle use.

During the second stage, from 2025 to 2030, the concept say electric vehicle production will increase until it reaches 10% of all new vehicles manufactured. Charging station production will also increase, and it slated to reach at least 72,000, 28,000 of which will be fast chargers.

During this time, Russia also plans to launch at least 1,000 hydrogen refueling stations and create at least 39,000 additional high-performance within the technological chain of production in electrochemistry, electromechanics, electronics and electric vehicles.

Yury Sergeyev, a senior adviser with Bellona’s Murmansk office, believes the concept’s goals are ambitious. While the number of EVs in Russia is only a fraction of cars already on the road, he says the growth in their sales is encouraging, but that the concept leaves many things unclear.

“The industry of both electric vehicles and charging stations in Russia is in its infancy,” he says.

“Significant efforts and financial investments will be required to realize the concept. It isn’t yet clear where that funding will come from. The sources are stated to be federal, regional and off-budget. But it is not clear from where it is planned to attract investments.”

To support the demand for electric vehicles in Russia, the Concept provides for a concessional lending and leasing program for their purchase. Owners can also benefit from a waived transport tax and access to restricted parking. The concept will also experiment with offering EV drivers free passage on toll roads. Buyers look to reap tax breaks of about $8,000. But there’s a caveat: those discounts only apply to electric cars made in Russia.

Native manufacturers of electric cars and batteries will be able to receive government subsidies toward building electric car and battery plants.

But Sergeyev is concerned that electric cars produced in other countries are getting sold short in the concept.

“Today we see the government’s reluctance to extend the abolition of the customs duty on electric vehicles, which expires this year, and this also raises questions,” he says.

“The duty is 15% of the value of the car – which is quite an impressive amount.”

For now, Sergeyev is taking a wait and see approach.

“In my opinion, we need to wait until mid-2022 to understand how the stated goals will be supported by real actions,” he says. “Then it will be possible to draw conclusions about the possibility of achieving them. ”