A strident environmental organization that has been in the Russian’s government’s crosshairs over its stance against the 2014 Sochi Olympics has been cleared by the country’s high courts to continue operations after it was nearly disbanded earlier this year, its representatives told Bellona. 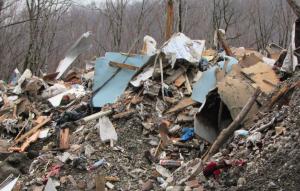 A strident environmental organization that has been in the Russian’s government’s crosshairs over its stance against the 2014 Sochi Olympics has been cleared by the country’s high courts to continue operations after it was nearly disbanded earlier this year, its representatives told Bellona.

The victory of the Environmental Watch on the North Caucasus (EWNC) in a southern Russian courtroom is an encouraging step toward legitimizing its bold exposure of ecological damage and corruption that accompanied President Vladimir Putin’s Winter Olympics, held last February in Sochi for an estimated $51 billion price tag, the most expensive Olympics ever.

EWNC, whose members include Prisoner of Conscience Yevgeny Vitishko, has been targeted by grinding legal injunctions, frozen bank accounts, arrests, surveillance and threats of shutdown ever since it published its damning report on official corruption and irreversible ecological damage to the protected forests, rivers and wetlands in the Krasnodar Region in preparation for February 2014’s Winter Olympics. Barbed wire and fences at the Sadovaya Prison Colony, where Yevgeny Vitishko is serving his sentence. (Photo: Charles Digges)

In light of the continued legal struggles many of EWNC’s members still face, and the generally dim outlook for NGOs across Russia under the “foreign agent” law, the court decisions to allow the group’s continued operations are a cause for cautious optimism, said Nils Bøhmer, Bellona’s executive director.

“We’ll cross our fingers that these rulings are a sign that this NGO will be allowed to continue its important work it the region,” he said.

The debate over whether  Vitishko’s will get amnestied

Vitishko was jailed in February 2014 for allegedly spray-painting a fence surrounding Krasnodar Regional Governor Alexader Tkachev’s summer home on the Black Sea, which blocks access to a public beach. His supporters insist Vitishko didn’t do it, and lawyers have said the punishment is disproportionate to the perceived offense.

Vitishko has 10 months left on his three-year sentence in a Tambov Region prison colony. But on April 15, a local court rejected his appeal for early release.

A presidential amnesty in honor of Russia’s May 9 Victory Day that could free more than 60,000 prisoners over a six month period was approved by the Duma last month. Whether Vitishko falls into the parameters of the amnesty is a hot topic of speculation in many Russian media.

Though Duma Deputy Dmitry Gudkov told the Rosbalt news agency (in Russian) on April 9 that political prisoners were not included in the amnesty, others accused of “premeditated destruction of property” – the official charge against Vitishko – are “not excluded” from the broad pardon.

RBK newswire, another major official source, reported the next day (in Russian) that Vitishko’s chances at an amnesty were high because his offence was non-violent and his remaining prison time is short. But the agency avoided declaring his impending freedom a done deal.

The OpenRussia news portal, however, speculated in its April 9 edition (in Russian) that Vitishko was too closely associated with political prisoners Gudkov said were excluded, and he would not be freed by the amnesty.

Suren Gazaryan, who won the 2014 Goldman Environmental Prize for his work on EWNC’s Olympic report, fled Russia for asylum in Estonia amid a pileup of bogus accusations, and in March was placed on a wanted list by Moscow’s Interpol office. Further, Sochi prosecutors last month told Vladimir Kimaev, another of EWNC’s key members, that he’s under investigation for “extremism” and “inciting hatred of the police,” for internet posts he made criticizing how law enforcement handled the run-up to the Sochi Games, according to the organization’s website (in Russian).

“The Sochi police did nothing during the long preparations for the Olympics to guarantee law and order – quite the opposite, they hid many environmental and human rights violations,” he said describing his internet postings. “This is what I said and will continue to say.”

Bøhmer said he hoped the renewal of EWNC as an NGO would loosen the vice-grip Russian authorities continue to exert on its individual representatives.

”It’s hoped this decision will prompt authorities to look into other issues of official harassment of EWNC’s members,” he said.

The original decision to disband EWNC as an NGO was handed down on November 24 by the Supreme Court of the Republic of Agydeya, which neighbors the Krasnodar Region where the Sochi Olympics were hosted. EWNC often conducts environmental inspections in the republic.

The Agydeya court’s decision liquidate the organization accused EWNC of violating its own charter, as well as “other violations of federal law, bearing a gross and repeated character,” according to court documents shown to Bellona by EWNC.

The group appealed the decision to the Russian Supreme Court in February, which on April 15 ruled against the Agydeya Court’s decision based on the notion that Agydeya’s Justice Ministry had not reviewed the group’s new charter, which was adopted in March

On May 6, Agydeya’s Justice Ministry confirmed EWNC’s new charter and renewed its NGO status. The new EWNC charter eliminated the word “volunteer” from its description and re-designated the group as an “interregional nature conservancy and public rights organization.”

The new charter also details EWNC’s advocacy work as geared toward promoting nature conservancy, advocating to widen protections of the region’s unique nature preserves, as well as promoting bicycles and other green forms of transportation.

The new charter seems focused on niggling issues that the group advocated earlier, but acting director Andrei Rudomakha said in an email that the reformulations hardly represents a surrender.

“I hope the authorities will now stop pressing us in the hope of getting rid of us, and simply accept as fact that EWNC’s activities will present inconvenient issues to them that in one way or another will have to be dealt with,” he wrote, adding that “our criticism of legal and rights violations perpetrated by authorities aren’t’ aimed at the authorities as such, but rather at the defense of legality and civil liberties.”

He further added that antagonism between NGOs and the government was pointless as both sectors are working toward the same purpose. He characterized the perceived discord as “and illness that must be cured.”