ST PETERSBURG – The Environmental Rights Center (ERC) Bellona in St. Petersburg today announced the winners of its fourth annual EcoJurist contest – geared toward encouraging a new generation of environmental lawyers in the country – from a record breaking pool of applicants.

Published on December 4, 2014 by Liya Vandysheva 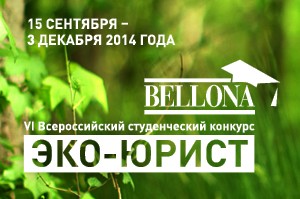 ST PETERSBURG – The Environmental Rights Center (ERC) Bellona in St. Petersburg today announced the winners of its fourth annual EcoJurist contest – geared toward encouraging a new generation of environmental lawyers in the country – from a record breaking pool of applicants.

An applicant pool of 2707 from 273 Russian institutes of higher learning in 78 regions were winnowed down by a jury of the country’s most prominent environmentalists, journalists and activists that met six times to determine who among the contenders expressed the most original approaches to addressing Russia’s environmental concerns.

The most prestigious prize of EcoJurist 2014 went to Vladislav Fillipov, a student at Nizhny Novgorod’s Lobachevsky State University. Fillipov has been researching the problems of oil pollution in the Kudma River – a tributary of the Volga, Russia’s longest river – in the Nizhny Novogorod Region. In their papers submitted for the competition, the students wrote about the most pressing environmental issues in their respective regions, focusing on air pollution, harmful industrial emissions, negative environmental impacts brought about by solid waste landfills, garbage dumps in unique nature preserves and national parks, unauthorized interment of cattle carcasses, and illegal cell phone tower installation on personal homes.

Artem Alexeyev, head of ERC Bellona’s legal offices and a member of the jury noted that with each year, the qualification level of environmental lawyers is rising. “Many participants in their work have touched on the most central and painful problems faced by Russia and which threaten its ecology,” he said.

The award found the worthy candidates

Institutes of higher learning most actively participating in the competition received subscriptions to Environment and Rights, ERC Bellona’s environmental and legal periodical. The prize for the highest level of educating students in the field of environmental law went to Volgograd State University.

This years contest differed slightly from previous years by the establishment of a scholarship in the name of the late Yury Schmidt, the crusading rights and environmental lawyer of his time and one of the co-founders of ERC Bellona. The scholarship was established with the purpose of encouraging students who constantly work to protect the environmental rights of citizens in their regions.

The envelope containing the name of the winner of the scholarship was opened by Schmidt’s widow, Yelena Schmidt Barikhanovskaya. The prize went to Moscow State University student Inna Kiseleva.

“My imagination was struck by the number of participants – this means that many people are interested in environmental law, that the environment in the country and Bellona have the prospect of a long future,” said Barikhanovskaya.

Natalia Zabrodotskaya of the Russian Delegation to the European Union congratulated the Russia nominees. ”

The name of the winner of EcoJurist 2014’s main award was announced by Konstantin Platonov, a representative of the educational concern AcademConsult.

AcademConsult has arranged for the student who best shed light on environmental problems a four-week English immersion course in the UK, Ireland, the US or New Zealand, something Platonov said “would allow [the winner] to expand his or her horizons.”

“We are very pleased to support this project, associated with increasing public awareness of environmental safety and environmental protection,” said Platonov.

The winner, fourth year student Fillipov, has competed in the EcoJurist competition once before. Last year, his work on pollution of the Starka River, a small river in the Nizhny Novgorod Region, by domestic waste won a first place nod.

According to Fillipov, his desire to participate in the EcoJurist competition was sparked by his university exams on ecology and land rights.

According to Vladislav, to participate in the competition pushed his exam at the University of Ecology and land rights. After that, he said, he “wanted to participate in a serious, all Russian project to try my hand in it.”

Fillipov said that while preparing for the competition he ran up against problems characteristic of working on ecological issues in Russia, mainly an aversion by state agencies to supply him with necessary information.

“I directed inquiries to Rosprirodnadzor [the Federal Agency for the Oversight of Natural Resource Usage] on oil spills, and they couldn’t give me any clear answers,” he told Bellona. “They only gave me the run around, that it wasn’t there area of competence, talk to someone else.”

Fillipov doesn’t rule out a professional career in environmental protection after graduating university, and said two cities in the Nizhny Novgorod Region, those of Dzerzhinsk and Kstovo are in dire need to such protection.

“We hope that through this contest more active citizens in the regions will be able to participate in the defense of environmental rights, and that because of that the environmental situation in our country will get better,” ERC Bellona Executive Director Nikolai Rybakov said on behalf of the organizers of the EcoJurist 2014 competition.

The entire list of EcoJurist 2914 winners can be found (in Russian) at Bellona.ru. The Russian-language awards ceremony can be viewed here.