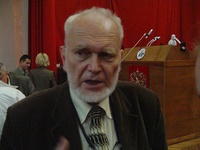 “The economic growth and so-called stabilisation in Russia have seen to an increased transgression of environmental laws,” said Yablokov from the podium of a recent environmental conference in Moscow.

“Laws, norms and regulations for the environment have become tattered rags that the business community washes its feet with,” Yablokov thundered.

The conference, from March 20th to 22nd, was the largest ever such gathering for environmental groups in Russia, and Bellona was among the co-organizers.

Yablokov and many of his supporters is despondent that Putin pulled the plug on the development of good environmental legislation and the creation of environmental standards that were making headway in the 1990’s.

Under Putin, woodlands and water defence legislation has become far poorer, peoples’ opportunity to influence the political process has been to a large degree eliminated and the state is trying to control and lock down as many critical non-governmental organisations (NGOs) as possible.

Environmental violence and fascism
Yablokov pointed out that there had been a series of arrests of critical voices in recent years and that individual critics of the regime had also been murdered.

“This is the situation across the whole of Russia, and the worst is that society has gone along with this ideology,” Yablokov said.

“Putin has said that our situation today is ‘stabilisation,’ but this makes no sense because the situation we have is environmental violence. The result of Putin’s politics is fascism.”

Yablokov showed a dictionary definition of fascism to the conference of environmentalists on a large projection screen and pointed out the similarities between the definition and the current situation in Russia.

The new era of openness, or Glasnost, ushered in by the Soviet Union’s last premier, Mikhail Gorbachev gave the opposition a megaphone through the environmental movement, and this green movement was at its time the single tolerated opposition and the single mass movement in Russia.

Yablokov himself was an advisor to the late President Boris Yeltsin. In the early, through the mid 90s, Yeltsin contributed to strengthening environmental defence in Russia through new and better laws and procedures.

Environmental activists became suspect and persecuted, something Bellona is intimately acquainted with through the Nikitin case. Bellona associate Alexander Nikitin was arrested for his help in compiling a roadmap of Russian nuclear waste, and was eventually cleared of treason charges in 2000 after a massive international campaingn for his acquittal.

Support from Yavlinsky
One  cameo appearance at Moscow’s environmental conference came from Grigory Yavlinsky, who established the liberal Yabloko party and was its leader for eight years. He is still among the most well-known and meaningful opposition politicians in Russia.

Yavlinsky underscored the meaning of independent environmental authorities, and criticized the current arrangement where those who work with environmental questions within state organs are either incompetent or toe the government line.

“I support the work the environmental movement does, and I support Alexander Nikitin,” Yavlinsky said.

Must defy the dangers
Yablokov urged environmentalists to continue the struggle for human rights and environmental defence in Russia, despite the dangers of arrest or the danger that an organisaton will be forced to lay down.

He called environmental organisations to the fight and bid them to focus on their positive experiences.

“Even though the green movement has in many ways failed, we also committed Russia to signing the Kyoto protocol and to diverting the Baikal pipeline away from vulnerable territory,” said Yablokov. 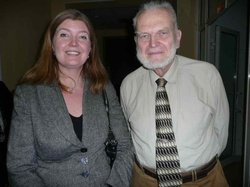 He also pointed out the newly gathered 300,000 signatures for the protection of baby seals – seals still breastfeeding – from hunting. After the signatures were delivered to authorities, Putin ordered Parliament to change the law such that hunting baby seals is illegal.

One and another victory
Bellona Russia advisor Kristin Jørgensen thinks it praiseworthy that Russian authorities are making changes in policy and decisions on the basis of the population’s engagement in certain matters, but underscored that there are limitations to its significance.

“These specific victories for the environmental movement are uplifting, but they won’t change the authorities’ policies, legislation or practice,” said Jørgensen.

“It is therefore important that the environmental movement in Russia continues to work with gaining changes in environmental legislation and to make the decision making process more transparent. Then people will see permanent changes.”

Bellona’s battle
The Russian NGO laws, which came into effect in 2006, have made it more difficult to fight for the environment. In addition to environmental legislation and oversight bodies becoming marginalised, freedom of expression and assembly have been trampled, something Bellona consistently criticizes and fights against.

The number of international organisations in Moscow that work with environmental issues to any degree have been crunched from 180 previous to the enactment of the 2006 NGO law to just 50 now, Yablokov said. On a national level, the number of active NGOs in Russia has decreased from 1500 in 2003 to 300 today. The reasons behind this can be traced both to the new NGO laws and Russia’s economic crisis. The new NGO laws have further reeled in NGOs’ possibilities to get support from abroad.

“It is clear that Russian authorities are frightened of mass movements a la the environmental movement in Russia at the beginning of the 90s,” Jørgensen said.