The allegations were broadcast on Sunday by the state controlled Rossiya TV channel.

"In the end of the last year, the FSB managed to ‘fish out’ a group of British spies, working under cover of their embassy," commentators of Rossiya TV’s "Special correspondent" television show said.

The controversial NGO bill, which was signed quietly into law on January 10th by Russian Vladimir Putin, himself former head of the FSB, and became law on January 17th, gives the Russian government wide powers to curtail the activities of NGOs, pre-approving and auditing their finances from donors foreign and domestic, and requiring them to register with the Russian government.

As the law breezed through both Kremlin controlled houses of the Russian Duma, NGO activists had counted on the vagueness of the law to keep it somewhat at bay and not interfere with their work. This new supposed revelation on Rossiya television, however, shows the Russian government is opening its war against NGOs swiftly and the juggernaut of the Russian Government has already draw up battle lines.

According to the show aired on Rossiya, and hosted by Arkady Mamontov, four British spies and a Russian citizen communicated, wirelessly transferring information from a computer to equipment planted in a stone in one of Moscow’s parks. A transmitter in the rock was shown on the broadcast of "Special Correspondent" using computer graphics. An assistant to Mamontov, in an interview with Bellona Web, would give no further information about his sources for the information. 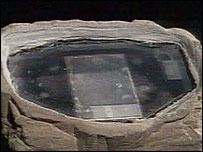 What ‘Special Correspondent’ showed
The FSB displayed an array of other financial documents indicating that the money had been given in cash, including funding for a project to open schools to train public inspectors in remote areas.

"We can only guess at who these inspectors were and what they were going to see in northern Siberia and the Far East," an FSB officer said on the Sunday broadcast.

The film showed an agreement with Moscow Helsinki Group(MHG), signed by Doe. But Nina Tagankina of MHG claims that such a document does not exist, as all the agreements are signed by the first secretary of the embassy Kate Lynch. Doe did not sign the agreements.

It should also be noted that Britain’s foeign office and foreign intelligence network, MI6, both throughouly denied any activity in the supposed spy-nab. In most cases, governments, when guilty, will simply say that they cannot comment on intelligence matters.

Lynch added that the financial document was authorized by Doe, as signing such documents fall under his purview.

This film may be indirectly connected with the new legislation tightening control over NGOs. The law enables additional financial control from the state.

Lyudmila Alexeyeva of MHG is against participation in the Public Chamber—which under the new law will supervise Russian NGOs— because it was created un-democratically. Russian voters participated in its creation only only: President appointed half of the members, and these members picked out the rest.

Alexeyeva commented on the documents supposedly impugning her organization in an interview with Gazeta.Ru late on Sunday.

"It’s absolutely not important who is signing grant agreements for MHG in the UK embassy."

She explained that the grant of 23,000 British Pounds was used for human rights seminars held by MHG in cooperation with the University of Essex.

According to BBC Russia, the British Foreign Office expressed anxiety and surprise over the statements broadcast on Rossiya TV. The Foreign Office also said support for NGOs in Russia is given openly.

According to BBC News, the Foreign Office has rejected any improper conduct by British embassy staff.

On January 10th Russian president Putin signed a bill that threatens to widely curtail the activities of NGOs, strengthening governmental control over their funding. The idea of the bill was declared as prevention of destabilization and ‘colorful revolutions’ in Russia.

This term refers to the Orange Revolution in Ukraine and the Rose Revolution in Georgia, both of which occurred in 2004 as responses to governmental electoral frauds. The bill was criticized by Russian NGOs, US congress and the Council of Europe, which called some aspects of the bill "too restrictive."

"We, via the British Council, have links with quite a lot of Russian non-governmental organizations," British Ambassador to Russia Tony Brenton told Interfax News Agency in the beginning of January.

"We will be watching very closely to ensure that the bill does not have a damaging effect on that work," he said.

The accusations by the FSB were broadcast the same the day the Kremlin-appointed Public Chamber held its first session, with Putin in attendence.