A group of United Russia deputies has submitted amendments to the Law On Public Associations to the Duma for consideration which would put the activities of all non-governmental organisations (NGOs) under the control of the state, flagrantly violating the constitutional rights of Russian citizens.

Published on November 8, 2005 by Vera Ponomareva 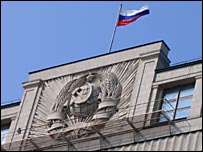 The United Russia faction, or Yedinstvo in Russian, is a loyalist party to Russian President Vladimir Putin and holds the majority of seats in the state Duma, Russias lower house of Parliament. It is not yet clear when the amendments will come up for vote on the Duma floor, but they are already facing outrage from Russias NGO sector.

The proposed amendments are nothing less than an attempt to establish totalitarian control over the whole of the country, and in particular over the institution NGOs that allow citizens to solve their own problems without government interference, said respected rights activist and deputy chairman of the Citizens’ Watch organisation Yury Vdovin, deputy chairman of the Citizens’ Watch organisation. Vdovin is also a board member of the Environmental Rights Center (ERC) Bellona, in St. Petersburg.

According to Vdovin, passing the amendments into law would mean the government is openly slipping from authoritarianism to totalitarianism on the Soviet model.

According to the bill, an NGO will be allowed to function only after informing the state registration body on the creation of the new organisation. Moreover, this procedure will be regulated by the whim of the Russian Government, and not a federal law.

Organising unregistered social activity will thus practically fall outside the law, which means a return to the ban in effect in 1920’s Soviet Union on the activity of non-registered social associations, said Lev Levinson of the Institute for Human Rights and the Social Expertise Institute in his written conclusions on the bill.

Separation of foreign NGOs
At a session of the Council for Development Assistance for Civil Society Institutions and Human Rights on July 20th, Putin expressed doubts regarding environmental organisations funded from abroad. According to Putin, such organisations are often used as levers for a competitive struggle with Russia. Regarding the financing of political activity by foreign organisations, the president said: No self-respecting state allows this, and we will not allow it.

According to the amendments proposed United Russia, subsidiaries of foreign NGOs will be banned from operating in Russia. Foreign NGOs will have to register their representative offices and branches as separate social associations, and divisions of foreign NGOs cannot be created either as social foundations or any other legal or organisational form.

The best-known foreign NGOs operating in Russia, such as Human Rights Watch, only have representative offices in Russia.

Financial control
Under current legislation, NGOs submit an annual account of their activity to the state registration body comprised of data submitted to the tax authorities.

The amendments to the law significantly expand the state’s authority in this regard: The registration body—in all likelihood the Ministry of Justice—will be granted the right to ask, with no limitations and without having to provide justification, for an NGOs’ financial documents. According to Levinson, this amounts to provocation for abuse by the state and arbitrary enforcement by officials.

This amendment, according to Vdovin, means control and undisguised interference by the state in the activity of NGOs.

NGOs against the state?
My information is that the bill was made by the presidential administration and is now being submitted to the Duma via United Russia deputies, Levinson told Radio Liberty. The main idea behind this document is to tighten the screws on NGOs.

If the bill is adopted, the state will be able to get rid of public oversight in all spheres, including environmental matters.

At present, NGOs occupy a fairly active position in the defence of citizens’ environmental rights: They provide consultative help, stand up for citizens’ constitutional rights in state bodies, and give legal assistance in court cases. There are also precedents of cases involving the legal assistance of NGOs being examined in the European Court of Human Rights.

In the near future the State Duma may pass the new Forest and Water Codes, both of which have been subject to change thanks to the activity of public environmental organisations.