ST. PETERSBURG – Fifteen years ago, in March of 1994, a report was published which, in essence, saved the Arctic region from a nuclear catastrophe. The report by the then little-known Bellona Foundation uncovered the secrets that were for decades hidden by Soviet authorities, and later, the Russian military.

Published on March 17, 2009 by Bellona, translated by Charles Digges

The subject of the secret was some 150 decommissioned nuclear submarines languishing at dockside at the ports of the Russian Northern Fleet with their spent nuclear fuel still on board. These cast-off submarines were rusting and their terrifying cargo of spent nuclear fuel could well have ended up in the waters of the Barents and White Seas at any moment.  The successor of the USSR – the Democratic Russia – had no money to devote to their dismantlement.

Retired naval captain first rank Alexander Niktin came to Bellona in 1994. As a specialist in nuclear and radiation safety, he took the most active role in preparing Bellona’s second report “The Northern Fleet.” Its publication shocked the world – everyone knew that the Russian military had it bad, but to such a degree as shown in the report was jaw dropping. Having revealed the secrets of the temple, Nikitin bore the brunt of the state penal meat grinder.

Despite Nikitin’s fight in a weight class above his own, he still emerged victorious. Nikitin shares his memories of that duel 15 years ago that propelled him onto the world environmental stage with noted Russian human rights writer Nina Katerli.

Nina Katerli: How did your work with Bellona begin? 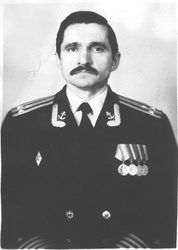 NK: What results of Bellona’s work do you consider to be the most important?

AN: Bellona has written a series of reports on nuclear topics. And today it continues to work in this direction. Our goal is to completely rid Northern Russia of nuclear and radiological threats. And when we do that, our mission will be considered accomplished. There is not a long way to go: Andreyeva Bay with its 34 tons of highly radioactive spent nuclear fuel.

When we finish this project (according to some evaluations, this will require another 10 to 15 years), I will complete my work with Bellona and find less turbulent matters. For now, we must continue to work, using our accrued experience and knowledge. To save other people from new ‘remarkable’ initiatives of the current authorities, like the law on state secrets…

NK: Do you think you would have been able to win your case had it occurred today?

AN: I don’t think so, because it is impossible to win cases like Khodorkovsky’s, Syutagin’s, Danilov’s and hundreds of others. My case took place during a politically advantageous time when the administration of the president didn’t interfere with judicial authority. Court then were more independent. Today’s KGB cronies were not in power, and they couldn’t lobby the cause of their institutions. The court was regulated exclusively by rights and laws.

NK: What can be done to overcome Russia’s growing case of spy mania?

AN: The political system that is based on the secret services must be replaced.