In only two hours today, the Court finished with all but one of the case files in the Nikitin trial. Procurator Gutsan wants his closing speech behind closed doors.

Published on December 14, 1999 by Runar Forseth 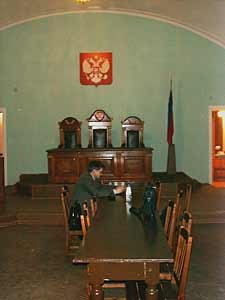 Procurator Aleksandr Gutsan doesn’t want to show his cards to the public – even not in his closing speech. He has asked for the court to be closed for the public when he starts his speech either on December 21 or 22. Initially, Judge Sergey Golets wanted to open the doors to courtroom 48 in the City Court for the final proceedings, but now it seems only Nikitin’s attorneys will speak for open doors.


The Court cut the day short on behalf of chief defender Yury Schmidt not feeling well. It will most probably finish the red tape business of going through the most recent case files tomorrow.


“Procurator Gutsan made some comments today,” said Aleksandr Nikitin afterwards, “but none of it made much sense. It was not connected to the charges against me. As an example, he argued that Admiral Mormul wrote his books about the Northern Fleet only to make money.”

“The Judge has not yet declared a closing day for the court investigation,” said Nikitin, “nor has he given an official day for this declaration. Right now I worry that the case will drag on, as we only work a couple of hours a day. There should be some limit to this. But of course, it is possible that Judge Golets only wants to make sure he doesn’t get any other cases to deal with before New Year.”


Until further information is given on this, we continue to expect the verdict to be released at the end of the year.

Although Nikitin worries that Gutsan may still demand to hear more witnesses, he doesn’t think this likely. “As long as the Judge has not declared a closure to the Court Investigation this remains a possibility, but the prosecutor doesn’t really seem that interested. He’ll probably be satisfied with the two experts that should appear on Thursday.”


The two experts Nikitin is referring to were members of the various expert commissions that evaluated whether the Northern Fleet report contained state secrets. Vyacheslav Bakanov is a technical expert from the Russian Navy head quarters and involved with the assessments of the report’s chapter 8.2 on submarine accidents. Mr. Romanov is an administrator at Department 8 of the Ministry of Defence, specialised in the art of classifying information.