The court surprisingly finished with chapter eight on submarine accidents today. The prosecutor did not ask any questions.

Published on November 25, 1999 by Runar Forseth 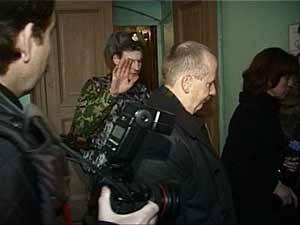 The trial is now one day ahead of schedule. "The indictment mentions five big and thirteen small accidents onboard submarines. The Court may already have an opinion, but can not yet inform us about it," said chief defender Yury Schmidt at the press briefing shortly after the court had adjourned. "So I can not say for sure whether we are finished with the examination of the evidence pertaining to open sources in relation to the submarines."

Schmidt also said he was surprised by the speed of today’s proceedings, and by the fact that the prosecutor did not ask a single question.

New books based on Nikitin’s sources 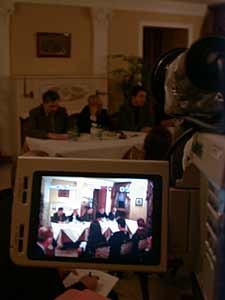 "The prosecutor has in general one main argument based on the fact that a specific word is not in the open sources, but I hope judge Golets is mostly concerned with the content, not the wording," said Aleksandr Nikitin.

Nikitin also commented on the recent release of two books about Russian submarines. One describes first generation submarines, and was written by the Rubin Institute. The Second book is from the Design Engineering Bureau of Nishny Novgorod, describing the reactor installations in first, second and third generation submarines.

The need for information
"I would like to say some words about the submarine accidents mentioned in the indictment," said Bellona President Frederic Hauge. "After many visits to Atomflot Bellona saw the need for doing something about the storage ship Lepse, which is filled with damaged nuclear fuel from an accident onboard the nuclear icebreaker Lenin. The ship is located less then two kilometres from the centre of Murmansk. To take the damaged fuel out of the Lepse would mean contaminating 5000 workers with the yearly maximum dosage. We decided that was not an option."

The Bellona Foundation then worked to get financing from the European Union and Norway to develop technology to remove the damaged fuel without anybody getting hurt. The resulting estimate was that securing Lepse would take some ten million dollars.

"That is very much money to spend on only one ship!" Hauge said. "We decided that the technology that had to be developed should work for other ships with similar problems as well. That was the start of the report – we needed a detailed overview of occurred accidents. Had the nuclear fuel from other accidents been damaged in the same way, or was there a need to modify the technology to include more ships, and how could the damaged fuel be accessed?"

Nikitin persecution creates problems
"Lepse is a civilian ship, so westerners can work on that, but we can of course not work on military damaged nuclear fuel. If the technology can handle the different conditions of damages fuel, Russia can secure the military vessels themselves, without a need for western involvement. That is the background for the report, and the report is the basis of the case," Hauge continued. "We need to secure the nuclear materials in Northwest Russia. Bellona has worked hard to convince the sources of financing that the technology must be at least partly Russian and must stay in Russia for further use."

Hauge also explained that Bellona had been instrumental in preventing the European Union from withdrawing its funding. The European Union had trouble transferring the funds to another fiscal year when the project slowed down because of the Nikitin case. "Bellona has worked with this, and it seems that the funding is secured, at least for now," Hauge said.

Tomorrow’s session in court will also be closed. It is expected to be rather short, so the following press briefing is rescheduled to 13:00, at the Cafe Ambassador next door to the restaurant Ambassador.