Bellona’s Nikolay Rybakov Thursday, along with other Russian environmentalists, met with Russian President Dmitry Medvedev, bringing a laundry list of environmental demands from ousting corrupt governors to easing the Kremlin’s choke hold on ecologists from government and industry with close state ties. 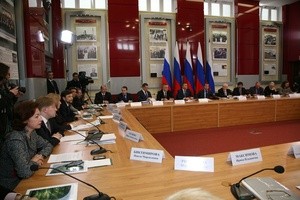 Photo: Plenipotentiary for Human Rights of the Samara Region

The meeting took place as Medvedev convened his Council for the Development of Civil Society and Human Rights in the town of Novokuybyshevsk in the Samara Region, devoting the meeting specifically to environmental issues.

Rybakov, who is executive director of St. Petersburg’s Environmental Rights Center Bellona, brought with him a sheaf of environmental issues and cases of individual environmentalists that have been singled out for harassment and arrest either by the government or private enterprises with close government ties.

He was one of a select group of environmentalists asked to take part in the council session, which included Greenpeace Russia’s Sergei Tsiplyonkov, Ivan Blokov and Vladimir Chuprov.

Specifically, Rybakov zeroed in on the case of Krasnodar Regional Governor Alexander Tkachyov, who has allegedly razed dozens if not hundreds of square kilometers in protected forest areas bordering on the Black Sea in the Trans-Caucasus region he governs to build luxurious summer homes for himself and friends.

The public lands have been fenced off by the local government.

Tkachyov is also suspected of several environmental abuses in the run up to the 2014 winter Olympic Games, which will be held in Black Sea resort town of Sochi. Dozens of local residents have also been booted from their homes to make way for the coming athletic facilities, Russian press reports have said.

Rybakov demanded the release of environmentalists who have been arrested by prosecutors in the southwestern Krasnodar Region for revealing Tkachyov’s supposed deforestation campaign. Suren Gazaryan and Yevgeny Vitishkov of the Environmental Watch of the Northern Caucasus were of both sentenced to 10 days of administrative incarceration Wednesday.

Greenpeace has also mounted a significant campaign demanding their freedom, and addressed the issue at the council meeting.

Rybakov further called for Medvedev not to extend Tkachyov’s term as the Krasnodar Region’s governor, which runs out in April this year. In 2009, Medvedev signed an amendment allowing Russia’s presidents to select regional governors from a pool of nominees.

Medvedev promised to pass the matter of Tkachyov’s alleged abuses to the offices of the Prosecutor General for investigation as Rybakov showed the president on his iPad a map of the areas where Tkachyov is illegally constructing vacation homes.

Rybakov also spotlighted cases of violence against environmentalists, singling out the harassment and beating of Alexander Senotrusov, a legislative representative of Lebyazhe, a village some 50 kilometers west of St. Petersburg.

Late in 2011, Sentrusov was attacked in Lebyazhe by a masked assailant wielding a baseball bat and struck some 10 times. He managed to fend off the attack with trash bags from a waste heap nearby, but police refused to investigate the matter as more than an isolated act of “hooliganism,” which carries a six month jail sentence if the perpetrator is apprehended.  Senotrusov’s supporters demanded that the investigation follow the proscribed path of attempted murder, which carries a 5 to 10 year sentence.

Rybakov also called on Medvedev to assemble the plenum of the Russian Supreme Court to analyze procedure for cases of environmental law in Russia’s court system. Such an evaluation has not been carried out for many years, and Medvedev promised he would make arrangements for the legal analysis to take place.

The environment and business

Heaping praise on Russia’s civil society sector, Medvedev also made more general pledges to facilitate closer ties between industry and environmentalists – a relationship that has always been strained, especially since President-elect and current Prime Minister Vladimir Putin’s first two presidential terms in office from 2000 to 2008.

That period, which was characterized by a boom in Russian industry and buoyed by high oil prices, shattered environmental considerations in favor of massive industrial production – especially oil and gas – which were taken largely under the Kremlin’s wing. Polluting industries were also distributed among Putin’s cronies – the so-called tamed oligarchs – leaving little incentive for environmental improvement.

Medvedev’s remarks offered a departure from that approach – as they have on previous occasions. But there remained, said Rybakov, some hope in Medvedev’s climb-down from the strict “power vertical” approach of Putin.

“It is obvious that the repressive approach in the environmental field is not always effective. All the talk that we just have to increase the fines [for environmental offenses] is misguided,” said Medvedev in his remarks to the Council, according to the official transcript at Kremlin.ru. No reporters were present.

“It is obvious that there is a need for incentives for businesses to create modern programs and technology, and conversion to environmentally friendly production,” Medvedev continued.

“Our companies can understand these arguments. We cannot say that the situation has not changed, especially when it comes to large and successful companies. However, they are not too eager to take these arguments on board,” Medvedev said.

Medevedev then gave a nod to Russia’s NGO sector, saying: “The state cannot tackle [environmental problems] without the support of civil society; therefore, it is essential to launch a dialogue on this complicated issue between the Government on the one hand, and the business community and public organizations on the other.”

To that end, Medvedev promised during the meeting that the Espoo Convention on Environmental Impact Assessment in a Transboundary Context the Aarhus Convention on Access to Information, Public Participation in Decision-Making and Access to Justice in Environmental Matters would be set before the Duma for ratification.

Both conventions were signed by Russia in the 1990s but never laid before the Duma for an actual vote on their ratification.

Do Medvedev’s promises have an expiration date in May?

Despite the wide raft of promises Medvedev made, he is, in fact an outgoing president, and his predecessor and successor Putin will, as previously arranged, simply swap seats on May 7 – and Putin is unlikely to bear any environmental torches.

Yet, it was Putin himself who established the Council for the Development of Civil Society and Human Rights in 2004 to ease the drum-tight tensions between the Kremlin and the NGO sector. But it remained largely symbolic until it was entirely disbanded by Putin in 2008.

When Medvedev took the presidential reigns he, too, let the council sit dormant for nine months before reviving it in February of 2009 to a mixture of applause and suspicion among Russia’s civil society activists.

The reconstitution of the council followed quickly on the heels of the beatings and murders of several journalists and environmental and activists, and coincided with a national financial crisis that stoked public anti-government sentiment.

So, whether Medvedev’s good intentions will hold water in the future remains to be seen. If the council is again disbanded by Putin, their chances are low.

“It is very hard to say what will happen to Medvedev’s words under the new regime,” said Rybakov in a telephone interview from Novokuybyshevsk. “These matters can still succeed while Medvedev is president, and he promised to carry them out while he is still in office.”

But continuity in easing the rift will depend as much on Putin as the industries with which he has corporate governmental affiliations, and much will depend on the make up of the new government.

Rybakov’s written report will be included in the overall report on the council’s meeting.