ST. PETERSBURG – Amid worsening conditions for ecologists trying to save the Khimki forest in the Moscow region from clear cutting to make way for am $8 billion high speed toll road between the capital and St. Petersburg, Bellona has asked Vladimir Lukhin, Russia’s human rights ombudsman to step in and help sort our the loggerheads. 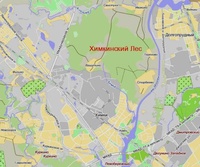 Environmentalists say the highway can be built to bypass the old oak forest, but the authorities and the company responsible for razing the forest and build the highway, Teplotekhnika, have refused to consider alternative routes.

Many former Soviet Republics, European countries and the European Parliament have also been summoned to help save the Khimki forest. Defenders of the Khimki Forest, the lead environmental organisation involved in the struggle, has also sent an appeal to the prosecutor general.

Yet, hundreds of other activists for preserving the forest turned out into the streets for violent protests that resulted in damage to the local administration building in the town of Khimki.

Nikolai Rybakov, executive director of the Environmental Rights Centre Bellona, Bellona’s St. Petersburg wing, yesterday wrote to Lukin that, “In today’s Russia, you are likely the only person who would listen to both sides of the conflict. Authorities and businesses alike comprehend the importance of your post and the public respects your name and experience.”

Meanwhile the speaker of the Upper Chamber of Russian Parliament made strong statements regarding activists that were taken into custody by police after a raid last week by unknown hooded men on an environmental camp set up to protect the Khimki forest from loggers, Interfax reported.

“The detention by law enforcement agencies of the environmentalists who are defending the Khimki Forest and their leader, Yevgenia Chirikova, is surprising, putting it mildly,” Federation Council Chairman Sergei Mironov said, and filed an appeal with the prosecutor general.

All activists have been released as of Sunday, but Mironov further said, “What kind of development of civil society can one talk about” if arrests are the authorities’ way to talk to the public, Mironov said.

Rybakov’s appeal and Mironov’s remarks come quickly on the heels of Fridays’ arrest of the activists. Chirikova managed to report to Bellona Web that, last Friday, a group of youths dressed in soccer gear and white hoods descended on the environmental camp and threatened the members with physical violence.

The youths told the activists they had come to “clean up and beat up,” according to another of the activists who spoke with Bellona Web.

When an anonymous call from an activist was placed to the police about an impending fisticuffs, responding officers reported in a statement to the Gazeta.ru Russian website that the activists, not the hooded marauders, were the source of trouble, and arrested some 15 of them for allegedly trying to block the departure of squad cars. Russian rock star Yury Schevchuk came to the site of the camp, where some activists still remain, to film a video appeal on the activists’ behalf.

Enviros: Teplotekhinka breaking its own promises and the law

On July 26th, the Defenders of the Khimki Forest movement announced an international campaign to preserve the land. The group sent appeals to ecological movements in Kazakhstan, Ukraine, and France, and the group is also preparing a statement for European Parliament.

On the same day Teplotekhnika announced it would suspend logging activities for 24 hours in order to check all of their documentation and logging permissions with environmentalists. One major environmental complaint against the clear cutting is that Teplotekhnika is lacking the appropriate official permission to do so.

However, after promising the brief cessation in logging, Teplotekhnika began felling trees again before the promised 24 hour suspension was over and the documentation check was completed.

Defenders of the Khimki Forest began on July 27th a legal analysis of Teplotekhnika’s documents and discovered that the company has violated several procedural stipulations. First, say the activists, Teplotekhnika does not have necessary building permits, any forest reclamation projects, nor any logging permits that are required by local authorities, and which must also be received by the Khimki City District in accordance with law. For these reasons, the Defenders of the Khimki Forest sent a complaint to the Russian prosecutor general.

This situation became far worse on Saturday when activists discovered a new clear cutting site in the centre of the Khimki forest near the village of Vashutino. Ecologists dismantled a logging site next to the felled area. Parallel to this, they were preparing for a meeting with Teplotekhnika’s management, which had been scheduled for the same day at the House of Culture in the town of Khimki. However, when town residents, ecologists, and other defenders of the forest were on their way to the meeting, it was announced that the Khimki town administration, for unknown reasons, had pushed back the meeting to a later and as yet unknown time. Teplotekhnika then announced that the Khimki town administration had refused to supply a venue for the meeting.

As this was occurring, a meeting in support of clearcutting the forest was taking place. Some 200 people who arrived in three busses displayed carefully printed placards reading: “Exhaust from Leningrad poisons Khimki Residents,” “Chirikov is a Top Hat,” and “Moscow will decide Matters for Us.” Some of the demonstrators were wearing jerseys with emblems reading “ Youth Guard of United Russia,” a reference to the political party created by former president, now prime minister, Vladimir Putin. Some Khimki residents reported recognizing members of the town administration among the demonstrators.

After the failed meeting with the Teplotekhnika, actitivists returned to the clear-cutting site in the Khimki forest, where they discovered a huge cordon of police. When they asked to see the logging permits, the ecologist were turned down, and police chained off the logging area. Yet, Sergei Mitrokhin, a parliamentarian with the opposition party Yabloko, managed to penetrate the logging camp, where he found two tree felling devices. He was not able to locate any logging permits, however, as he was dragged by police from the site. Activists have built a new camp across the road, which is housing environmentalists and journalists from national newspapers.

As many as several hundred young people also took to the streets in Khimki to support the activists. Carrying banners reading “We will clean the forest of fascist occupiers,” they headed for the town administration building firing non-lethal weapons, burning roman candles, and shouting “We will save the Russian forest,” and “Find Another Route for the Highway.” As a result, of the demonstrations several windows at the Khimki town administration office were broken, the door was broken, and graffiti reading “Russian Forest” was spray painted on the building’s walls, The activists then made for the train station to Moscow and no arrests were made.

On Friday, despite a moratorium place on logging by the prosecutors’ office, clear cutting continued – still without any official permission. The Yabloko party has appealed to Russian Prosecutor General Yury Chaika, sedding him a letter reading in part that, “in accordance with the law on vehicle roads, clear-cutting is only allowed after permission has been secured for construction of a road.”

Many events surrounding these events remain unclear. It is still unknown who the masked invaders are or represent, and it is still foggy who held the meeting in favour of felling the Khimki forest, and who the individuals were who held the violent protest in defence of the forest. Unfortunately, the police do not appear to have much interest in ascertaining these facts, even though a criminal case has been filed over destruction to the Khimki administration building. And in that case, only activists who where located at the camp several kilometres away have been questioned.