The European Court of Human Rights has started to handle the case of Grigory Pasko. Thus, it has turned the first page of the last chapter of a case that has exposed grave weaknesses within the Russian legal system. 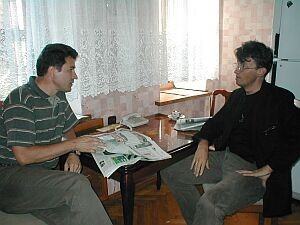 The conviction of Russian environmental journalist Grigory Pasko to four years of hard labour for treason through espionage on December 25, 2001 caused a public outcry, internationally as well as in Russia. When the Russian Military Supreme Court half a year later confirmed his conviction, the outcry was even stronger.

A political reprisal
One of the Russians that spoke out in Paskos favour was the chairman of the Russian Federation Council (the upper chamber of the State Duma), Sergei Mironov. I understand how a man feels who is condemned for something his is not guilty of, Mr. Mironov said, and underlined the necessity for court reforms in Russia.

Amnesty International adopted Pasko as a prisoner of conscience in January 2002. The organisation held that the conviction appeared to be motivated not by the need of protecting national security, but by political reprisal for exposing the practice of dumping nuclear waste (EUR 46/001/2002).

The Washington Post characterised in its editorial of December 27, 2001, the case as the most flagrant of a series of bogus espionage cases against independent journalists and academics initiated by the Russian security police in recent years.

The conviction also raised concerns regarding the independence of Russian courts. The European Parliament addressed this issue in January and July 2002, while the Parliamentary Assembly of the Council of Europe carried out a thorough examination of the case, before it in a statement released in November 2003, concluded that the conviction exposes grave weaknesses with the procedure before Russian military courts.

The case communicated
The issues that have triggered off the above-mentioned as well as a number of similar statements were brought to the attention of the European Court of Human Rights in Strasbourg, by Paskos defence team on December 25, 2002 (Application nr. 69519/01).

Due to the Strasbourg Courts huge caseload, its preliminary examination of the case did not start until the autumn of 2004.

In early May 2005 the Court notified Paskos defence-team that following a preliminary examination of the admissibility of his application, the President of the Courts First Chamber had decided that the case should be communicated to the Russian Government.

Many counts to answer for
The Court requested the Government to submit written observation on the admissibility and merits of Paskos case by July 25, 2005. With reference to his application, the Government was in particular asked to deal with the following questions:

– Was the length of the criminal proceedings against Pasko in breach of the reasonable time limit drawn up in Article 6 § 1 of the European Convention on Human Rights?

– Was the principle of equality of arms, as required by Article 6 § 1, respected?

– Was the requirement of adversial proceedings, cf. Article 6 § 1, adhered to?

– Did the domestic courts use of illegally obtained evidence as a basis for the conviction adversely affect the fairness of the criminal proceedings in violation of Paskos right to a fair trial under Article 6 § 1?

– Was Paskos right to have adequate time for the preparation of his defence as required by Article 6 §§ 1 and 3 (b) complied with?

– Was the presumption of innocence guaranteed by Article 6 § 2 respected?

– What law was applicable in Paskos case? Was it foreseeable? Did the domestic courts interpret the law extensively and/or apply it retroactively. If so, was Article 7 of the Convention respected in the criminal conviction?

– Taken the pre-trial events and the conviction of treason together, has there been an interference with Paskos freedom of expression, in particular his right to receive and impart information, within the meaning of Article 10 § 1 of the Convention? If so, was the interference necessary in terms of Article 10 § 2 and was it proportionate?

This list of questions addresses all the issues that were brought up in Paskos application to the Court, and shows that the Russian Government has many counts to answer for.

The page has been turned
Thus, it is perhaps no big surprise that the Government twice has requested the Court to extend the deadline for submitting its observations. The Court has granted both requests.

Since the latest deadline expired on September 26, one must however, assume that the first page of the last chapter of the Pasko case now has been turned.

Yet, it is hard to predict when there will be a final decision of the case. There is however reason to believe that the Court will rule on the admissibility of the various counts in the first half of 2006, and that the merits of the case will be decided in late 2006 or early 2007.

****
Grigory Pasko worked as an investigative reporter for the newspaper of the Russian Pacific Fleet Boyevaya Vakhta (Battle Watch). He was arrested on November 20, 1997 and charged with treason through espionage. The Pacific Fleet Court in Vladivostok acquitted him of these charges on July 20, 1999, but sentenced him to three years for abuse of his official position  a crime he was never charged with  and released him on an amnesty.

The Russian Military Supreme Court cancelled this verdict in November 2000 and sent the case for a new trial at the Pacific Fleet Court. The re-trial started on July 11, 2001 and ended on December 25, with Pasko being convicted to four years of hard labour.

Both sides again appealed against the verdict. The Military Supreme Court handled the appeal case on June 25, 2002. The Court made a few changes in Paskos favour, but upheld the four-years sentence. In September 2002 Pasko was transferred to a labour camp in order to serve the rest of his sentence. He was surprisingly released on January 23, 2003.

After his release, Pasko has moved to Moscow, where he edits the magazine EcoPravo (www.ecopravo.info) and writes for www.bellona.org. He has also completed a law degree.