Hour of Justice closing in?

Grigory Pasko has been released on parole, but his story “won’t be over till they clear his name”, writes Bellona-attorney Jon Gauslaa in this commentary from the heart of the Russian capital. 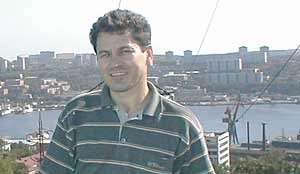 Yesterday I met Grigory Pasko for the first time since September 2001. Back then; in the port of Vladivostok in the Russian Far East he was a tensed man, with a Damocles-sword hanging above his head. Three months later the sword fell down, sending him to serve a four-year treason sentence in one of Russia’s "hard regime" labour camps.

A different glow
Now he had a different glow in his eyes. I could not immediately figure out what it was, but then it struck me. It was the relaxed determination of an innocent man, who intends to keep on fighting to the end and beyond in order to clear his name.

And more, there was a strong glimpse of hope in the man’s eyes.

It is still only eight days since he walked out of the labour camp in Ussyriysk, 100 km Northwest of Vladivostok. He was released on parole, despite protests from the administration of the prison camp as well as from the state prosecutor.

Obsessive spy mania
On the very same day, according to Moscow Times, Russian President Vladimir Putin when presiding over a meeting of the advisory State Council critisised what he called an "obsessive spy mania" in the country and "excessive bureaucratisation" in protecting national security.

The next day the chairman of the Russian Supreme Court, Vyacheslav Lebedev said at a Moscow-conference for Russian judges that Pasko’s conviction indeed would be the subject of a supervisory review by the Supreme Court Presidium. Only a month before his deputy Nikolai Petukhov ruled that there was no reason for the Presidium to review the conviction.

Moreover, while local prosecutors said that they would appeal Pasko’s parole-release, the Russian Prosecutor General, Vladimir Ustinov, said that such a move would be inexpedient.

Winds of change
One can only wonder what lies behind these apparent winds of change. Knowing what Pasko has gone through since his arrest in November 1997 it is easy to understand that he does not take anything for granted. Many times before has hope turned to disappointment and freedom to imprisonment in his case.

And it may well happen again. His release is only conditional, meaning that any minor offence, like walking on a red light, could send him back to the labour camp. Yet, currently the torch at the end of the tunnel seems brighter than ever.

Time between
In the time between my previous meeting with Pasko in September 2001 and today, much effort has been spent in order to get him released. First and foremost by his Russian attorney, Ivan Pavlov, who – to use Pasko’s own words "single-handedly turned my defence from being an old Lada to a brand new Mercedes."

As events turned out I was also granted the privilege to take part in Pasko’s defence. It was only Pavlov’s brilliant juridical brain and a patient family, who let me spend many late nights at the office, that allowed me to get to the core of the case. Still, many were the times when I wanted to call it a day, and throw all my papers in the dustbin. However, there was allways one image that kept me from doing that.

It was the image of an innocent and decent man standing in the shadow of a huge and ugly Soviet style monument near the harbour of Vladivostok.

The story of the Hurricane
This image has kept coming back to me ever since. And every time it is accompanied with these words:

"How can the life of such a man/
Be in the palm of some fool’s hand?/
To see him obviously framed/
Couldn’t help but make me feel ashamed to live in a land/
Where justice is a game/"

The words are written by Bob Dylan. The land he refers to is not Russia, but the USA, and the man is former boxer Rubin "Hurricane" Carter who in 1967 got a life sentence for killing three men in a bar shoot-out in Paterson, New Jersey.

Carter was released in 1976 on the ground that the prosecution had witheld evidence favourable to the defence. But after a second trial he was sent back to prison. On November 7, 1985, judge H. Lee Sarokin of the Newark Federal District Court overturned the second conviction after finding that the prosecution committed "grave constitutional violations" and that the conviction was based on "racism rather than reason and concealment rather than disclosure."

On January 11, 1988, after the prosecution had contested Carter’s release in every instance of the legal system, the US Supreme Court rejected the prosecutor’s appeal and threw out the conviction.

It won’t be over till they clear his name
Like the story of Pasko, the story of Rubin Carter shows that the fight for justice can be a long and uphill struggle. Moreover, Carter’s story shows that no legal system is infallible, and that the strenght of the system is not determined by its capability to produce convictions, but by its capability to correct its mistakes.

And again I hear Dylan’s words:

It took the Hurricane twenty-one years to clear his name. Even though the mill of Justice indeed is a slow-working machine, I have a notion that it will take Mr. Pasko considerably less time to clear his. Yet, after having spent seven years of my professional career working with Russian espionage cases, I have learned that nothing is over before it is over…