The imprisoned journalist and environmentalist Grigory Pasko, who currently is serving a four-year espionage sentence, was today awarded the 2002 Reporters Without Borders/Fondation de France Prize. 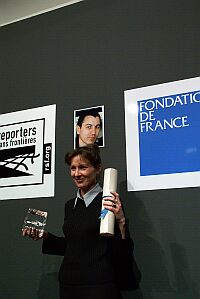 The prize worth 7.600 Euros was remitted to Pasko’s wife, Galina Morozova, in Paris on the occasion of the 34th anniversary of the Universal Declaration of Human Rights. It is awarded annually to a journalist who has shown devotion to freedom of information through their professional work or principled stand.

A wake-up call to journalists
By awarding the prize to journalists who symbolise press freedom in their countries, Reporters Without Borders (RWB) and the Fondation de France (FdF) intend to underline the importance of press freedom throughout the world. The organisations consider this a particularly significant issue in a world where 110 journalists currently is imprisoned just for doing their job, trying to keep the public informed.

In the grounds for awarding Pasko with the Prize, the RWB and the FdF states that the real motivation behind his conviction is that he wrote about the pollution caused by the Russian military’s nuclear submarines, and released images of the Russian fleet dumping radioactive liquids into the Sea of Japan. Paskos incarceration is characterised as a wake-up call for all journalists.

International jury
Among the other nominees for the 2002 prize were Gao Qinrong from China, who currently is serving a 13-year sentence for having written about a failed irrigation project and Bernardo Arévalo Padrón from Cuba, who was jailed for six years in November 1997 for calling President Fidel Castro and Vice-President Carlos Lage liars.

Prize winner released
Pasko is currently languishing in a prison camp in Ussuriysk, 100 km north-west of Vladivostok in the Russian Far East, waiting for a possible hearing of the legality of his conviction in the Presidium of the Russian Supreme Court, as well as a parole hearing. Both hearings will apparently take place before the end of the year.

In that respect, the fate of the winner of the RWB/FdF prize for 2001, Reza Alijani from Iran may give him hope. Mr. Alijani was freed from prison in December last year, only a few weeks after being awarded the Reporters without Borders / Fondation de France Prize

*****
Grigory Pasko who worked as an investigative reporter for the newspaper of the Russian Pacific Fleet was arrested on November 20, 1997, and charged with treason through espionage. He was acquitted of these charges by the Pacific Fleet Court in Vladivostok on July 20, 1999, but sentenced to a three-year imprisonment for ‘abuse of his official position’ although he was not charged with that crime, and released on a general amnesty.

After both sides had appealed, the Supreme Court cancelled the verdict in November 2000 and sent the case back for a new trial at the Pacific Fleet Court. The re-trial started on July 11, 2001, and ended on December 25, with Pasko being convicted to four years. The verdict was again appealed by both sides. On June 25, 2002, the Military Supreme Court confirmed Pasko’s four-year sentence. Pasko was transferred to a labour camp in the Russian Far East on September 10, 2002.