Ecology & Rights, the magazine published by the St. Petersburg Environmental Rights Center (ERC) Bellona, has become a winner of the national environmental award Ecopositive-2014 in the nomination “Mass media and new media” for promoting successful environmental NGO practices and campaigns and its work with law students and the general public in the field of environmental law.

Published on December 16, 2014 by Charles Digges 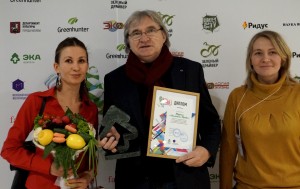 Ecology & Rights, the magazine published by the St. Petersburg Environmental Rights Center (ERC) Bellona, has become a winner of the national environmental award Ecopositive-2014 in the nomination “Mass media and new media” for promoting successful environmental NGO practices and campaigns and its work with law students and the general public in the field of environmental law.

The IV Ecopositive awards ceremony took place in Moscow on December 11. The award organizers are the Russian interregional environmental non-profit ECA Green Movement and the Moscow Youth Multifunctional Center, established by the Government of Moscow.

The goal of the award, information on ECA’s page reads, is to bring the public’s attention to environmental problems and constructive solutions to them and highlight the work done by non-governmental organizations, their representatives, and civil activists whose projects aiming to improve the ecological situation in Russia have been successfully carried out throughout the year.

“The Ecopositive award was conceived to support public figures, civil initiatives, [and] business organizations that throughout the year make their contribution to improving the ecological situation. With this award we want to create a new annual tradition of toting up the year’s positive environmental results,” ECA leader Marina Kokorina said. Some of the notable initiatives of 2014 have been the project called “Plus 1 to Your Karma” – the electronics retail chain Media Markt’s program that encourages people to bring used batteries, which are hazardous waste, to the shops so that the chain can further send the batteries for recycling; the Velomesto project focused on developing a biking map of Russia and some of the former Soviet states, a mobile phone app, and a magazine for cyclists; an action called “Selfie against Garbage,” initiated by the Ministry of Natural Resources and Ecology of the central Russian Republic of Chuvashia; the environmental movement “RasDelny Sbor,” created to promote the practice of household waste sorting in Russia. A special commendation went to the activist Alexei Zavyalov for his dedicated work to restore pine plantings in a felling site in Vologda Region.

At the award-giving ceremony, Media Markt representatives collected old batteries, and all trash at the event was collected and separated by RazDelny Sbor activists.

The event also featured a variety of master classes and show rooms, a fair, a New Year holidays raffle with prizes such as handbooks on setting up a green office, and a competition for the best tweet with the hashtag #Ecopositive2014. The guests were also invited to try their hand at crafting original eco-gifts: bags, notebooks, Christmas tree decorations, and amulet dolls.

The magazine Environment & Rights has likewise received recognition in the past: the 2011 and 2013 National Environmental Awards, and a best investigative piece commendation of the Artyom Borovik Award, given to the magazine’s then editor-in-chief Lina Zernova for her 2012 article “The Gulf of Finland: Who will solve the mystery of the cesium anomaly?”