EUSEW 2014: The crucial role of dialogue towards a low-carbon future

The workshop ‘A dialogue on low-carbon future: developing a common vision to support EU’s energy related decision making’ took place on 24 June 2014 as part of this year’s EU Sustainable Energy Week. It provided an opportunity to discuss citizens’ engagement in energy policy starting from energy dialogue experiences among stakeholder organizations in the 10 European member countries of the FP7 project R&Dialogue. 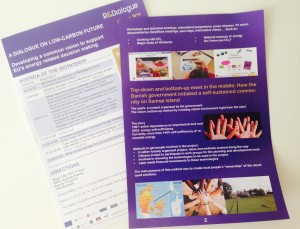 The event’s aim was to discuss how the different actors, namely research, civil society, industry and policymakers, can overcome the existing communication gap and talk about dialogue in the EU’s decision making related to the transition to low carbon societies and a sustainable future. Three of R&Dialogue’s country teams, the Netherlands, Germany and Portugal, shared their experiences with the project with regards to the key societal challenges they faced in the energy transition.

The Dutch experience showed that pre-requisites for a constructive dialogue are an open and flexible attitude towards the outcomes, while noting that this may have consequences for the set targets and goals. The lack of the latter can also result in mistrust among stakeholders. As an example of what can go wrong, the case of CO2 Capture and Storage (CCS) Barendrecht was illustrated. The political and legal framework for project implementation did not require engaging with the local authorities and the public. The resulting lack of dialogue caused protests and opposed positions that in due course prevented the project’s development and caused a deadlock on CCS as CO2 reduction policy measure.

The German case, on the other hand, presented the climate mitigation plan, which is the roadmap to fulfill the goals of the climate mitigation act of North Rhine Westphalia (NRW), which is still being developed. In the initial phase of the process in NRW, working groups were set up addressing climate change mitigation as well as adaptation. A wide variety of stakeholders took part in these, including experts from companies, CSOs, public administration and municipal associations.  Together these actors developed measures and strategies, which were subsequently presented and discussed also by the public during the second, so-called differentiation and networking phase. Once this phase is completed, the outputs will be handed over to the Parliament of NRW, who will decide on measures and strategies that will be put in force. The R&Dialogue process in the NRW region aims to go even further and improve mutual learning between organized civil society and science. The meetings held provided an opportunity for a similar group of participants to meet repeatedly, thereby creating an atmosphere of trust and facilitating the shaping of a future vision.

The Portuguese experience shows that there is a general lack of efficient communication among stakeholders involved in the energy transition discussions. Opinions are polarised and some opinion-makers resonate on the general public’s concerns, thereby obstructing an objective dialogue. In order to achieve a constructive discussion it is essential for parties involved to be educated and exposed to information they trust.

Following this workshop, a number of important lessons can be drawn. There is agreement on the essence of dialogue in attaining a low carbon society. However, societal dialogue is still to be integrated in decision making processes. Wide participation on the part of all stakeholders including the public, is needed to discover and co-create dialogue pathways fit for each national context and culture and for Europe. Emotional aspects are being considered and studies in the R&Dialogue process to understand how to establish spaces for interaction facilitating an atmosphere of trust where people speak, listen and discuss in a constructive way. A shared condition behind successful dialogues exemplified during the workshop[1] has been the adoption of a bottom-up approach where people are given the feeling of ownership and control over the situation.