Solar ovens and sustainable development are a hot combination

UNITED NATIONS – For some reason people are always sceptical about simple and small mechanisms while blindly believing in mega-projects, whether they be the Dnepr Dam or a nuclear power plant. Yet, in the sphere of energy, powerful and environmentally damaging installations are more frequently exchanged all around us for seemingly tiny aggregates that use energy in a simple and understandable way: For instance – solar ovens.

Published on May 15, 2008 by Andrey Ozharovsky, translated by Charles Digges 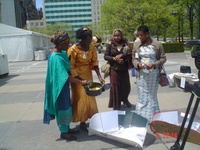 A solar oven looks like a special bent box covered with foil. The foil reflects sunlight and focuses it on a standard black metal frying pan. The pan is covered and wrapped in a transparent plastic packet to reduce heat exchange.

The most surprising thing as that this simple apparatus really works. It can cook vegetables, rice, chicken all by using the suns fire. This progressive high tech device is distributed by the California-based NGO Solar Cookers International.

The oven was demonstrated by a smiling Nigerian woman with a gleaming smile – a true solar cook. This all took place in the park in from of the United Nation’s headquarters in New York during another of the UN’s meetings of its Commission on Sustainable Development.

Those who were taking part in the commission’s work, other UN bureaucrats, and tourists all watched while the woman put food in the pan, oriented the solar ovens to the sun, and from time to time slightly changed their position with the movement of the sun.

New York weather in May is not hot – about 16 or 17 degrees Celsius. The sun shines, but through a cloud cover. The food was put in the pans around 11 am and by about 2:30 pm it was ready to eat.

I was sceptical about this enterprise, but having tried the stewed chicken, the boiled corn, the vegetable ray and the boiled rice, all prepared in the lukewarm New York sun, I understood that the solar over was totally operable.

Of course, the cooking time was extended considerably, but you don’t need firewood or gas. Just rotate the carton a bit with the sun. Pirogi cooked in such an oven come out especially well. The only problem is boiling the tea.

The design of the oven is simple. All that is needed is foil and a box. Even the box that, say, a microwave over came it will suffice.

Unfortunately, Russia has apparently been struck with a case of energy gigantomania. The use of renewable energy – wind, water, and sun is not encouraged by the government while the money is found in newer and newer thermo-electric, hydro- electric and nuclear power plants. But there is plenty of energy around us – we just need to get up the gumption and gather it in.

For example, it is a known fact that every square metre on the surface of the planet gets about a kilowatt of energy from the sun. This is known as the solar constant.

Various complicated technical mechanisms can turn that into electricity. But we frequently need not just electricity but heat and thermal energy for food preparation.

Here a box and foil yield nothing to nanotechnology. Naturally if the coefficient of useful activity of the solar stove were closer to 100 percent, then food preparation would go much faster: after all, a kilowatt is the power of a standard electric kettle. The coefficient of useful activity for our box is five to 10 percent, but it is simple in the preparation of food and is very cheap. As it turns out, on an sunny day our planet almost every one could cook dinner using solar energy. So why are people talking about an energy crisis?

Of course, there are more comprehensive solar ovens – with metal reflectors that resemble a small hotbed frame, or even large stationary frames for cafes. Solar Cookers International put considerable effort into spreading this technology. Solar ovens are in successful use in Kenya, Mali, Tanzania, India, Nepal, Vietnam, and France.

In Karakalpakstan, a republic of the former Soviet Republic of Uzbekistan, solar ovens were featured in Vdol Amu (Along the Amu, in reference to the Amu Darya river) publication of the Union for the Defence of the Arals and the Amu Darya. Perhaps the oven will become popular in this region.

The United Nations Human Rights Councils commissariat for refugees supported the use of solar ovens for food preparation in the Iridimi refugee camp in Chad, were some 18,000 people fleeing violence in the Darfur province of Sudan are located.

The area of the camp – which is desert – has no local electrical sources and wood is also absent. But sunlight is plentiful. Some 15,000 box-based solar ovens were sent to the refugee camp, and many of the refugees have assemble them and are using these simple but effective mechanisms.

Of course, Russia is a northerly country and effective use of solar ovens are confined to a rather small territory of the country – such as the region of Sochi – home to the 2014 Summer Olmpics. But it seems to me that the powers that be will sooner build a nuclear power station there than consider the use of wind and sun power. It is long past due for Russia to seriously study the questions of solar energy, wind energy and tidal energy. Otherwise, the country runs the risk of falling not only behind Europe and the United States, but behind Sudan.