Murmansk authorities and ecologists team up on renewable energy development

Governor of the Murmansk region Yury Yevdokimov has given his ear to environmental organisations’ demands to develop renewable energy sources in his region and vouched his administration’s readiness to cooperate on a regional programme that would turn good intentions into actions.

Published on December 12, 2006 by Anna Kireeva, translated by Maria Kaminskaya 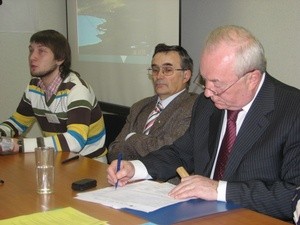 Signed agreements were reached between Murmansk regional authorities and ecologists at a seminar on renewable energy sources (RESs) initiated by the Murmansk-based organisation Nature and Youth and the environmental group Ecodefense!. The seminar gathered together researchers of such ecological organisations as Bellona and Gaea, as well as scientists from the Kola Scientific Centre of the Russian Academy of Sciences, representatives of the regional administration and municipal bodies and the governor of the Murmansk Region himself, Yury Yevdokimov.

“It is simply a crime not to use freely available wind energy. We want to understand what stands in the way of working with renewable [energy] sources,” said Ecodefense! expert Andrei Ozharovsky.

Ecological organisations voice their position
Governor Yevdokimov signed his support to the position outlined by ecological organisations that states, in part, the demand to declare the use of wind energy and energy generated by other RESs a priority of the region’s energy policy. Only in such a case of a dedicated approach will the Murmansk region be able to cover up to 20 percent of its need for electricity and heat by availing itself of wind-generated energy.

“The position endorsed here is one of those good stones, good bricks laid into the edifice that we all are building,” Yevdokimov said in an interview to Bellona Web. “I am grateful for your understanding that without developing new capacities, the electric power complex of our region will be forced into a dead end.”

The ecologists were calling for the administration’s support in the creation of a regional regulatory and legal framework that would facilitate the wide use of RESs, as well as in efforts to involve the public in the decision-making process.

The Murmansk Region, say environmentalists, must put together a Programme for the Development of Wind Power, which will be aimed at the construction of both large wind farms to supply power to the grid and isolated power-generating installations to provide heat and electricity to remote populated areas.

This programme will have to schedule specific time frames for the introduction of new wind power capacities and summon all possible sources of investment to procure the necessary funds.

By putting his name under these demands and setting before his administration the task of realising the stated goals, the governor has given a momentum to a series of steps necessary for the development of renewable energy in the region.

“Specialists from the regional administration will be working with you and discussing the issues as much as will be necessary. The way our energy capacities are distributed is out of balance. We have a lot of capacities in the south, but unless we reassign electric power substations and build a new thermal power plant, we will have a lot of problems already within several years,” said Yevdokimov explaining how, by looking at different sides of the same problem, ecologists and authorities came to find they have common goals.

“This is a step in the right direction. Let’s hope that the political statement made by the governor will become a reality in the shape of a changed approach to the development of the region’s energy industry,” Nature and Youth head Vitaly Servetnik said in an interview to Bellona Web.

The quadruple agreement
Early 2006 saw the Murmansk Region welcome the signing of a four-party agreement on the development of wind energy in the region. The parties involved were local electric power supplier Kolenergo, the Kola Peninsula’s wind power resources developer Vetroenergo, the Kola Scientific Centre of the Russian Academy of Sciences and the regional administration.

This was an agreement on intent, by which the signing parties announced a plan to jointly start developing a wind energy programme on the territory of the Murmansk Region. Each of the participants will have an obligation to solve a particular set of issues, with the Murmansk regional administration taking on the task of handling land allocation, legal support and lobbying wind power interests in various federal governmental structures.

However, hardly anything had changed since the signing of the agreement. But at the seminar, authorities promised that the agreement will grow beyond just being ink on paper: Next steps will be conducting in-situ measurements, developing the project’s technical and economic feasibility study and allocating necessary land plots. 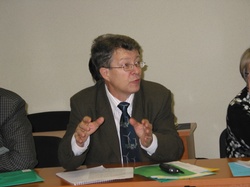 The difficult issues usually accompanying land allocation cannot be solved without the participation and support of the regional administration. One of the tasks at hand is to determine specific locations for the construction of future wind farms. According to senior research assistant with the Kola Scientific Centre’s Laboratory for Renewable Non-Conventional Energy Grigory Dmitriyev, among the sites promising most effective land and wind use are the Rybachy Peninsula and the villages of Teriberka, Serebryanka and Lodeinoye.

Renewable energy worldwide
Today, there is no country left in Europe that has not tried to generate electric power out of the energy available from the sun, wind or the tides as they base such researches on both environmental and economic reasoning. Prices for hydrocarbon fuels and nuclear fuel are constantly rising, while managing the environmental consequences of using such fuels presents more and more problems each day.

By 2020, all members of the European Union will generate 20 percent of their energy from renewable energy sources. Some of these states, like Denmark, already cover more than 10 percent of their electric power needs by using wind resources.

Other nations are now putting more effort into raising the share of renewable energy in their energy economies: The US has officially announced the goal to increase renewable energy use to 25 percent by 2025, while Finland pledges to reach the 40-percent mark by the same deadline.