What is Russia’s climate future as the EU moves toward a low carbon economy?

Just how ambitious are Russia’s goals to rein in greenhouse gas emissions? Is the country ready to take steps toward a low carbon economy? And how will Moscow cooperate with the European Union – its biggest trade partner – as that group of nations transitions to a carbon-free economy?

Published on December 10, 2020 by Anna Kireeva, translated by Charles Digges 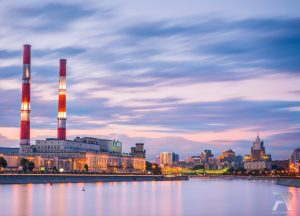 A factory in Moscow.

Just how ambitious are Russia’s goals to rein in greenhouse gas emissions? Is the country ready to take steps toward a low carbon economy? And how will Moscow cooperate with the European Union – its biggest trade partner – as that group of nations transitions to a carbon-free economy?

These questions, which were discussed at the global Russian-European climate conference early this month, couldn’t come at a more appropriate time. Temperatures in Russia’s polar region – still reeling from a rash of freak heatwaves and wildfires over the summer – are rising twice as fast as elsewhere on the globe. That spells trouble for permafrost, the mixture of soil and ice that covers more than 60 percent of Russia’s landmass. As the mercury climbs, the permafrost thaws, flooding pastures, twisting roads and destabilizing buildings.

Russia’s Ministry of the Far East and Arctic recently put a cost on such losses, estimating that the creeping effects of climate change are likely cause €99 billion worth of damage to northerly infrastructure by 2050. The figures are part of an ongoing federal study the ministry is compiling on adapting to the effects of global warming.

Still, approaches the EU is taking to rein in its carbon emissions are troubling to many Russian experts, who fear the measures will have consequences for Russian business and industry.

Indeed, according to Frans Timmermans, executive vice president of the European Commission in charge of the European Green Deal, the European bloc’s most important task is addressing the climate crisis and coping with the effects of steadily rising temperatures. As such, the EU has committed itself to becoming carbon neutral by 2050 and has outlined detailed steps to get there.

Other countries in Russia’s near orbit are following suit. China has announced plans to become carbon free by 2060. South Africa and South Korea have declared similar goals, and the United States, after four years of regressive environmental steps, intends to re-enter the Paris Climate accord and revise its environmental policy under a Biden presidency.

Yet while the EU aims to cut its greenhouse gas emissions by 30 percent by 2030, Timmermans says even this isn’t enough. Europeans will thus focus attention to the energy needed to run buildings as heating and cooling accounts for 40 percent of all energy consumption. To reduce this, large-scale renovations and modernizations are required.

Russia and the EU

In order for Russian to maintain an economic edge in this changing environment, it, too, must begin to decarbonize,  Ruslan Yedelgeriev, an adviser to the Russian president and Moscow’s special envoy for climate issues, told the climate conference.

“The energy-intensive industry may suffer the most, but we must and will decarbonize if we want to be competitive,” he told the conference. “The state should help companies, since before it was those companies that ensured the economic development of our country.”

He added that regardless of how ambitious the EU’s green restructuring plans may be, no one group can act alone. To help, Russia is preparing its own green transition strategy, which includes a raft of regulatory documents that are still under development. But Yedelgeriev underscored that the transition must be collaborative and smooth.

“Everyone is afraid of the Green Deal, but let’s not forget that the EU is Russia’s largest economic partner,” Timmermans told the conference. “All energy-rich countries exporting fossil fuels must accept that there is no future for this fuel. Producers, consumers and importers of such fuels in all countries have the same responsibility. These countries must make the green transition together. Now there is time for all countries to rebuild, we are talking about a horizon of 30 years.”

Despite an international drive to gird against the effects of climate change and the general acceptance of the science proving that the world is warming, there are still many conservative skeptics in Russia. They view renewable energy as an indulgence, and advocate further development of the country’s massive fossil fuel resources. To then, Europe’s Green Deal is a conspiracy contrived by Russia’s enemies.

“So far the conservatives are dominating and winning, but if nothing is done, Russia will drop out of global competition in a few decades,” says Anatoly Chubais, chairman of the Russian tech firm Rusnano. “Coal will see its peak consumption in the 2020s, oil in the 2030s and gas in the 2040s. What’s next? What will happen to Russia?”

Indeed, Russia’s climate ambitions leave much to be desired. Moscow currently aims to reduce emissions by 30 percent under its 1990 levels by 2030. Given the collapse of Russian industry in that year, however, and with it Russia’s emissions, this goal would actually increase emissions by 3 percent compared to today.

“This is anything but an ambitious goal, you can do nothing here at all,” says Chubais.

But he also warned against the other extreme of so-called “eco-radicalism” – whose adherents advocate blindly copying Europe’s path toward decarbonization.

“Our fuel and energy complex is 20 percent of our GDP, 40 percent of our budget and 60 percent of state exports,” says Chubais. “It determines the life of the whole country, therefore, one must act here very deliberately and carefully.”

Yet Chubais said he also views the birth of renewable energy as the most significant positive shift toward a low carbon economy in Russia. Currently, the installed capacity of renewable sources in the country are two gigawatts. By 2024, this will grow to as much as six gigawatts.

“Over the past three years, solar and wind power generation has appeared in our country, as well as its own industry for the production of equipment for this sector,” Chubais noted. “Before that, there was nothing of this. I believe that an installed capacity of five or six gigawatts is a serious figure when the sector has been developed from scratch. We hope Russia won’t break with this policy prior to 2035.”

He also identified one area in the drive for renewable energy where Russia and the EU can strike a spirit of cooperation: Hydrogen. The European Union has already taken strides toward increasing hydrogen’s role in the energy transition and it will be in demand in the production of steel and cement, aviation fuel. It is also needed as an energy carrier.

“Hydrogen for Russia in 20 to 40 years will become a great challenge and a great opportunity,” says Chubais. “Our energy sector has capacities that will be needed to produce ‘green hydrogen,’ which is produced with renewable energy sources.  At the same time, Russian and Europe are connected by a colossal gas infrastructure, and if we integrate that structure with the infrastructure for hydrogen production that Europe is building, we will be able to make this transition.”