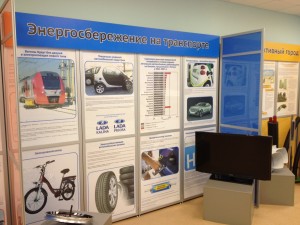 The Agency between 2011 and 2013 managed to draw around a billion rubles ($15.8 million at the rubles current depreciated value) from the federal budget. The money helped implement 51 projects in 20 municipalities.

A mother lode of 500 million rubles came from the federal budget in 2013. This financed the installation of automatic heat regulation in 25 educational, health, cultural and social service institutions. Further, all 120 educational institutions in Murmansk received equipment to regulate heat in conjunction with the weather.

Last year saw a dip in federal funding to 122.4 million rubles. That was shared among the Murmansk, Olenogorsk, Umba, Varzuga and Polyarny Zory municipalities, as well as with the regional Bayandina hospital, the Olenogorsk city hospital and the Murmansk Region’s government auto pool.

The most significant projects

Three trends are worth special note. The first is delivering electricity to far-flung regional settlements. The first such project was the combined wind-solar-diesel electric station set up in the village of Pyalitsa. The village installed four wind installations of 5 kilowatts apiece, two diesel generators kicking out 30 kilowatts, and 60 solar panels for a combined installed capacity of 12 kilowatts. Various sources of renewable and efficient energy powering the Pyalitsa settlement in the Murmansk Region. ((Photo: Courtesy of Gennady Popov)

The installation literally brought the village out of the dark ages – where the previous diesel generator only approach provided only a few hours of electricity and light a day, the new combinatory approach guarantees the lights can burn 24 hours all the time. The move saves the settlement 3.75 million rubles a year on diesel fuel deliveries into complex geography.

“Further such projects will be implemented in the settlement so of Chavanga, Tetrino and Chapoma,” the Agency’s deputy director, Yury Korksonov, said. ”There, we are planning for 10 wind generators of 10 kilowatts, and four of 5 kilowatts, as well as four diesel generators of 88 kilowatts, two at 17.6 kilowatts, and 300 solar panels with an installed capacity of 75 kilowatts.”

“The savings will equal 8 million rubles a year,” Korksonov added.

Another important agenda item is implementing the Vodokanal project in Monchegorsk, which is the first water treatment facility in the region to set up its own industrial thermal pump. The pump is designed to accumulate hear from wastewater and send it domestic heating. The project is budgeted to cost 8 million rubles, and is slated to recoup those costs over four and a half years.

Such an example shows that it’s entirely possible in Russia to profit from even such secondary sources as sewage. The wish of the authorities is all that’s required.

But the most massive effort was modernizing street lighting. Since 2011, 11 municipalities have taken it up: Murmansk, Kirovsk, Kandalaksha, Olenegorsk, Monchegorsk, Kola, Nickel, Pechenga, Tumany, Tuloma, and Mezhdurechie. The upgrades will reduce the budgetary burden on these settlement, specifically energy payments. Payments. This has come about thanks to the replacement of energy-intensive bulbs with energy-efficient lighting.

During this push, the industrial city of Nikel and the city of Kola worked out a system of energy service contracts. Within the framework of Kola’s service contracts, 207 LED lighting fixtures were installed. All the work has reached completion and six streets were given new lighting for 16.5 million rubles. Some 3.79 million of that was accounted for by private payments of service contracts.

By comparison, outdoor lighting in most Murmansk Region settlements is dominated by mercury lamps, which consume about 280 watts. LED lamps, on the other hand, eat up only 80 watts, equaling a net consumption reduction of more than three times.

“Correspondingly, Kola’s energy savings will be about 186,000 kilowatt hours a year, which in monetary terms amounts to about one million rubles,” said Korkonosov. “We also see maintenance cost savings.”

The results of implementing these projects in Murmansk area municipalities and regional institutions in 2013 amounted to tangible savings totaling 127.7 million rubles. Savings in thermal energy amounted to 27,973 gigacalories; electrical energy savings totaled 1033 kilowatt hours; 4080 tons of fuel oil was saved and 61.8 tons of diesel fuel didn’t need to be used.

Exact figures on the results for projects implemented in 2014 are not yet available. But preliminary figures say the regions should expect a 30,6 million ruble savings. “The last two years have certainly seen the agency become an asset, and if in the beginning the organization raised questions, then now we are seeing actual results,” said Yury Sergeyev, Bellona-Murmansk’s renewable energy projects coordinator. He added it was particularly encouraging that the Agency emphasizes the importance of renewable energy sources. He also said the organization maintains a high level of transparency and strives to work with environmental NGOs.

“A striking example of the Agency’s cooperation with Bellona Murmansk is its assistance in creating a registry of power installations in the Murmansk region operating on renewable energy,” said Sergeyev. The award winning roster, currently available only in Russian is called “Renewable Energy on the Kola Peninsula.”

The art of persuasion in trying times.

The precipitous slide of the ruble, which is drawing Russia into an inflationary recession, the magnitude of which has not been seen since the ruble crash of 1998, certainly threaten the implementation of energy efficiency programs for the coming year. As such, new programs will rely on extra-budgetary financing, specifically energy contracts.

“The most in-demand course for energy efficiency implemented by service contracts will be the installation of automated heating points regulated by weather conditions, modernization of municipal street lighting and so on,” Agency director Korolyov said.