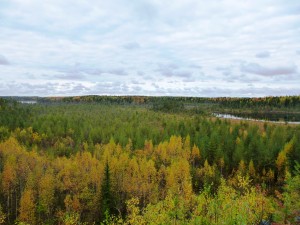 More than 60 percent of the energy balance flowing toward keeping the boiler systems of the republic operating consists of fuel oil and diesel brought in from other parts of the country. Another 40 percent is accounted for by natural gas.

Yet Karelia, which runs along the Finnish-Russian border, has nearly unlimited supplies of local fuels, as 25 percent of the vast territory is bog land. Russia’s vast lumber industry could also provide mountains of recycled wood waste products that can be turned into pellets for fuel.

At present, local fuels account for a mere 19 percent of heat production in the republic. According to the company Petrozavodsk Communal Systems, the republic’s biggest heat supplier, the Prionezhsk and Pryazh districts of the Karelian Republic run nine boilers on local fuels – wood chips and other wood products, which account for 3.5 megawatts per boiler of thermal energy. The districts’ No 5 boiler does better, kicking out 7.5 megawatts on milled peat fuel.

According to company representative Natalia Klemesheva, a host of investment projects are in the works to finance the transfer of heat sources to local fuels, which is part of the Republic of Karelia’s renewable energy use policy.

Boilers with a 100 megawatt capacity in the Loukhsk, Kem, Prionezhsk and Pryazh districts were reviewed for investment. Pellets were chosen for fuel because of their high environmental quality – at least for this kind of fuel – and ease of transport and storage.

A reliable, steady supply of woodchips and other lumber industry waste products to harvest for the constitution of Karelian boiler fuel is currently lacking in the republic. Peat harvesting and production is taking place only in Karelia’s Pryazh region, delivering 11,500 tons of fuel per year.

“In analyzing projects, we came to the conclusion that in transitioning boilers running on coal and fuel oil to wood chips, wood pellets and wood required not only upgrading the boilers,” Klemesheva told the concluding conference of the two-year long Nordic Council of Ministers’ Renewable Energy in Northwest Russia project. “Some [boilers] needed to be closed and new ones built in their place – in addition to 90 percent of the heating infrastructure.”

As an example, she cited the heat optimization project in Pryazh, which has a population of about 3,000. The village has been running five separate boilers, four of which run on coal and one that operates half on peat and half on woodchips and lumber waste.

The 178.5 million ruble ($4.5 million) project will mean closing the four coal fired boilers and shifting the consumer base to the boiler running on peat and lumber waste.

“The first two boilers are closed and central power will in 2015 increase from 7 to 15 megawatts,” said Klemesheva. “The project will conclude in 2016.”

Will biomass lead to a renewable energy structure?

Though the United Nations Framework Convention on Climate Change, the EU and the Russian government recognized wood or biomass fuel pellets as a renewable energy source, the designation has not come without debate, Jonas Helseth, director of Bellona Europa, said in an email.

The international institutional recognition of these biomass fuels as renewable is dependent on various factors, such as the rate at which new trees can be grown – or whatever other form of biomass is burned – to replace what is used as fuel, said Helseth. Others argue that leaving trees alone to grow leads to a more sustainable natural carbon absorption system, as trees would grow larger if not felled.

“But this is only partly true, as evidence show trees don’t grow exponentially when in a dense forest as when newly planted – in other words, forests get ‘full,’’ said Helseth.

The situation is therefore somewhat more nuanced. Regrowth is faster for biomass that gets replanted to make up for deficits. But existing biomass likewise continues to grow.

“[By] that argument– in addition to the logistics of the biomass supply chain, which will inevitably produce some emissions – carbon neutrality is an illusion,” Helseth wrote. And while trees rot and age they release carbon – and if they are not cleared, they provide fuel for wildfires that release carbon in far more ravaging ways – something Russia sees on a massive scale each summer.

But more advanced biofuel production employs parts of a tree that are not currently used, such as residues, Helseth said. And this holds true for other crops and agricultural wastes, which would otherwise decay and release carbon.

“Biomass certainly entails large emissions,” wrote Helseth. “And in Europe, more than 50 percent of renewables are, contrary to people’s belief, actually biomass based” as opposed to solar or wind.

Were those emissions captured and stored, and should the biomass source remains sustainable, it could lead to negative emissions, taking CO2 out of the atmosphere, Helseth said.

But Klemesheva said guaranteeing a steady supply of wood chip pellets and lumber waste in Karelia remains a serious problem. In other words, the local biomass source is not yet sustainable.

“The cost of pellets and lumber waste […] is very high, and the time over which they would recoup their own cost is 15 years,” she said. “Therefore, we simply cannot use them at present, as legislation dictates that a project must recoup its own expenses within seven years to be considered effective.”

Old growth forests like this can be a rich resource for biomass fuels, but often cannot replace what has been burned as quickly. (Photo: Wikipedia)

The only solution is producing the pellets within Karelia itself – but their production costs are currently more expensive than coal and oil.

“Expanding the scale of the projects is possible only in circumstances were we are seeing development of peat production, as well as stimulating the harvesting and transport of lumber industry waste,” Klemesheva said.

The conference concludes the two-year Renewable Energy in Northwest Russia project, which was conducted with the assistance of the Nordic Council of Ministers in North-West Russia.

According to the Swedish-Karelian Business and Information Center, headquartered in Petrozavodsk, the chief aim of the project was to create cooperative conditions on renewable energy use and boosting energy efficiency in Russia’s Northwest based on the experience of western European countries.

The main task of the project was to increase local sources of energy especially in remote settlements in the Barents Sea region, introduction of new renewable energy technologies, and developing renewable energy and energy efficiency pilot programs.

“The most important result of the project was forming a network of partners consisting of regional and municipal authorities, energy efficiency centers, research institutes, companies and businesses, nature conservancy organizations and international institutes,” Tatyana Klekacheva, the executive director of the Swedish-Karelian Business and Information Center.