Bellona presents its roster of renewable energy sources on the Kola Peninsula, partners with Karelia to do the same

PETROZAVODSK, Russia – Bellona presented its complete roster of power installations on the Kola Peninsula that are producing electricity on renewable sources at a renewable energy conference in Petrozavodsk.

Published on October 20, 2014 by Charles Digges 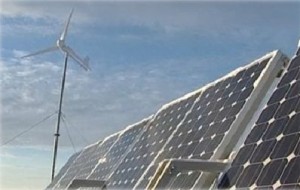 PETROZAVODSK, Russia – Bellona presented its complete roster of power installations on the Kola Peninsula that are producing electricity on renewable sources at a renewable energy conference in Petrozavodsk.

Bellona will soon produce a similar document detailed such power sources in the Northwest Republic of Karelia.

The brochure was one of the winners of the regional stage of the ENES-2014, a national competition for implemented energy efficiency projects, taking the award in the “best project to promote energy-saving lifestyles and energy-efficient organization of production” category. Murmansk Minister of Energy and Public Works, Eduard Koltsov thanks Bellona for its work on its renewable energy brochure. (Photo: Anna Kireeva/Bellona)

The brochure lists the various information on existing energy and thermal installations in the Murmansk Region that run off renewable energy, aside from small structures that provide energy for personal consumption. It also lists short technical descriptions and characteristics of the Kola Peninsula’s renewable energy power sources, where they are located and how much they energy they produce annually on average.

In discussing the work that went into the brochure during the wrap up meeting of the Nordic Council of Ministers’ Renewable Energy in Northwest Russia project late last week in Petrozavodsk, Yury Sergeyev, Bellona Murmansk’s renewable energy projects coordinator said Bellona was currently working with the Karelian Ministry of Construction and Public Works to document the Republic’s renewable energy sources as well.

Karelia is already in the process of moving many of its public boiler heating systems off coal and gas to biomass fuel – fuels which are classified as renewable. The Nord Gidro company, which builds and reconstructs hydroelectric stations throughout Russia, is actively working in Karelia to develop small-scale hydroelectric plant.

In 2011, the company reconstructed the 4800-megawatt Lyaskelya small-scale hydroelectric plant.

In June 2013, the company put the Ryumyakoski online, with an installed capacity of 630 megawatts.

Tatyana Pokutnik, a representative of Nord Gidro told the conference the Kalloikoski plant is nearly complete. Engineering documents for this project indicate the construction of a 975-kilowatt plant to take the place of two old and derelict Finnish plants producing 550 kilowatts.

The new plant is scheduled to come online this year.

In 2013, the company started construction on the 500 kilowatt Reboly plant, which will completely supply electricity to the 1000-person village of the same name. The village currently relies on three diesel stations supplying 1080 kilowatts. Also in 2013, Nord Gidro began construction of the Beloporozhsky No 1 and 2 hydroelectric plants, which each have an installed capacity of 24.9 megawatts. They are being built near the villages of Panozero and Shomba in the Kem district of Karelia.

According to Russian classification, only hydroelectric plants of 25 megawatts or less are characterized as renewable sources.