A land use deal inked today in Jordan sets the scene for the unfolding of a daring project that may just yet turn Sahara into a green oasis. Bellona’s president Frederic Hauge, who has travelled to Jordan to take part in the signing, called the agreement “a giant step forward in our efforts to realise the Sahara Forest Project.”

Published on January 11, 2011 by Ruth Lothe, translated by Maria Kaminskaya 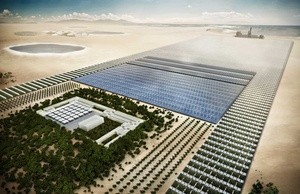 The project, which envisages using a unique combination of technologies to turn arid desert areas into fertile lands, has been in development for several years.

The site that has finally been settled upon to build the project’s first test facility is a 200 000 square metre location in Aqaba, a coastal town in the far south of Jordan, some kilometres from the shore of the Red Sea. SFP has also secured rights to an area of additional 2 000 000 square metre for later expansion.

Last June, Jordan’s King Abdullah II saw a project presentation during a visit to Oslo and was left impressed by its possibilities, saying he was ready to facilitate its implementation in Jordan.

The contract signed today with Aqaba regional authorities became the result of a series of positive meetings between the Sahara Forest Project participants – including Bellona, which is a partner in the project – and a number of Jordanian ministers.

“We have seen the signature on a very spectacular and potentially important project on renewable energy, where we try to pool our experience in some adventurous and entrepreneurial approaches to exploring the potential of this country and the solar potential of the middle eastern region. Starting in Jordan is really a promising starting point,” Jonas Gahr Støre in a statement today.

“We are very happy for the support of Jordanian and Norwegian governments. It is encouraging that we share the same vision of a more integral approach to solving challenges in the food, water and energy sector,” said Bellona’s Hauge.

The partners behind the Sahara Forest Project are Bill Watts of Max Fordham Consulting Engineers, Seawater Greenhouse, Exploration Architecture and the Bellona Foundation.

In 2009, after first studies showed that the concept was feasible and economically viable, the project was presented internationally at the December 2009 UN Climate Conference in Copenhagen, Denmark. The innovative approach was a sensation at the conference and was very well received by the participants.

“The Sahara Forest Project appears to be a very interesting example of the holistic thinking we need a lot of in the future, to make our systems for energy, water and industry more sustainable,” the EU development commissioner, Andris Piebalgs, said at the time.

The main pillars on which the project rests are salt water greenhouses, concentrated solar energy, and cultivation of traditional crops along with energy crops such as algae. The end result? Fresh water, food, and sustainable biomass and energy.

“We will use what we have enough of to produce what we need more of,” Hauge said of the project.

As a nice side benefit, the barren desert outside will be supplied with enough moisture to become, over time, a green valley blooming with vegetation. Even better: Algae, vegetables, and other plants will play an additional role, absorbing carbon dioxide from the air.

“The Sahara Forest Project has attracted international attention, and it has shown a remarkable progress since it was first presented,” said Hauge. “I am sure that a [first] SFP system will soon become a reality.”

A cornucopia of environmental solutions

The Sahara Forest Project involves combining several methods to solve, in one fell swoop, a whole range of major environmental problems of our time.

According to Hauge, the shortage of fresh water, uneven distribution of food, dirty energy production, lack of biomass and, last but not least, global warming can all be solved with what he calls “holistic approach and technology”:

“The reason that Bellona has gone into this with full force is that the project provides so many answers to so many questions at once,” Hauge said.

In the ambitious project, where everything is interconnected, saltwater greenhouses, used to grow algae and vegetables, convert seawater into fresh water. Concentrated solar energy provides electricity – power for driving pumps and fans – as well as water. The damp, cool air in the greenhouses makes for good growing conditions inside, while condensation and steam from the plant will ensure green growth on the outside. Meanwhile, fresh water is used to grow crops and re-vegetate surrounding dry areas, as well as to provide water to the concentrated solar energy plant, which requires large amounts of water. Furthermore, the cultivation of algae will give the world much needed biomass, which can then be used to produce energy or food.

“Aqaba is a dry desert area with plenty of sunshine, as well as a coastline. It is a perfect fit for this project,” Hauge said.

In essence, when these different technologies are put to use in a combined approach, the processes will start “feeding” each other. And apart from the purely environmental advantages, the project offers a huge commercial potential for “regenerative growth” – reforestation and establishment of new green jobs, all as a consequence of commercially profitable production of food, fresh water, biofuels, and not least, electricity.

“The Sahara Forest Project is based on the need for going green by black numbers, Hauge summerized.

Jordan is a desert country that suffers from a continuous scarcity of fresh water.

“Jordan is actually the world’s fourth poorest country in terms of water resources. The numbers of tourists travelling to Jordan are constantly increasing, and the water problem is growing ever larger. The development of SFP will thus be of great advantage to Jordan,” Hauge said.

The project envisions three separate stages of development: in depth studies throughout 2011, construction of a Demonstartion Centre, slated to start in 2012, and commercial-scale development beginning in 2015.

Benefits for the world

The bigger picture, once the project’s first plant is successfully online, offers some encouraging possibilities as well: Facilities such as the one planned in Aqaba have the potential to alleviate water and food shortage globally and to produce biofuels without competing with food production. Moreover, the Sahara Forest Project can contribute to forestation efforts in desert lands.

“Bellona’s aim must be to make the desert green and keep the ocean blue,” said Hauge.

As the project progresses, the beneficial effects of the vegetation it is expected to produce – absorbing carbon dioxide from the air – will also eventually start to show, rising over time to levels sufficient to drive down considerably CO2 concentrations in the earth’s atmosphere. SFP could thus be actually able to slow down global warming by achieving a negative CO2 balance.

“The Sahara Forest Project is a fiercely ambitious effort from Bellona, but ambitious is exactly what we must be,” Hauge continued. “A critical prerequisite for solving both the climate crisis and the world’s food problem is to enable developing countries to produce their own food, their own water, and their own clean energy, instead of importing oil from us.”

When fully developed, SFP will also likely help create a host of new green jobs, both for the Aqaba project and elsewhere where similar initiatives are undertaken.

“It comes in handy, given that billions of people worldwide are going to need work and increased income in the years to come,” said Hauge.