Demand for wind energy on the Kola Peninsula growing

MURMANSK – The interdepartmental commission for siting industrial scale projects in the Murmansk region has approved a declaration on intentions to build a second wind park on the Kola Peninsula that is planned to put out 100 megawatts of energy. Plans for a third have not yet been approved.

Published on November 7, 2008 by Anna Kireeva, translated by Charles Digges 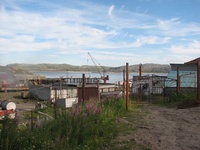 The St. Petersburg based-Russky Veter (Russian Wind) company will be building a wind park in the Pechenga district of the Murmansk Region. Some 50 wind installations will be erected Northwest of the village of Linakhamakhara, were the average wind speed is estimated at eight meters a second.

“The advantage of the chose site is its distance from large scale energy producing installations,” Nikolai Korotayaev, Russky Veter’s chief engineer. “ Construction of the wind park will facilitate the industrial and social development of the region.”

This was confirmed by Sergei Leus, the Murmansk’s Region’s minister for industry, transport and energy.

“The wind park in the Pechenga district will be in demand, but it is necessary to understand that aside from the wind park’s installations, network construction, laying roads, et cetera, will be necessary,” he said.

Delivery of heavy materials will come by sea to Pechenga Bay. The estimated cost of construction is €110 million. It is envisioned that the funding for the build will come only from Russian banks and investors. Construction is scheduled to begin in 2009, and the wind park will come on line in 2011. The wind park is expected to have paid for itself in 7 to 9 years.

The planned wind park will have the possibility of expanding to 400 megawatts over the next seven years.

Russky Veter was founded in 2008 by a group of private investors with the goal of building wind parks in Russia.

Low capacity energy system
Members of the interdepartmental commission said that the lack of new industrial scale projects in the area may mean there is a low demand for the energy to be produced by the slated wind park. This is tied not only to the abundance of energy systems on the Kola Peninsula, but also this system’s low capacity.

The issue of the system’s abundance was raised several times during the commission’s meeting. According to Alexander Maslov, first deputy director of the Kolenergo subdivision MRSK Severo-Zapad, technically plugging the wind park into the grid will require building more network lines.

“The most important thing is to define is the market for selling produced energy,” he said.

“At present there is an institute, as a guaranteeing supplier, which is represented in the Murmansk region as Kolenregosbyt and KRES, said Korotayev. “With their help, we can come out on the wholesale energy market and solve the problem of distribution.”

The second wind park at Teriberka
In October, the interdepartmental commission approved the construction of a 200 megawatt wind park near the village of Teriberka in the Murmansk Region. This wind park will be built by the Russia Windlife Arctic company, which was founded by the Dutch firm Windlife Energy.

At the most recent commission meeting, the declaration of intent to build another wind park in this area was reviewed. Developers explained their choice of the Murmansk Region not only for its resource supply potential, but also in line with gas industry plans in Teriberka, as well as the assumed shut down of reactors at the Kola Nuclear Power Plant. However, the last argument was scrubbed at the last minute. The project will be implemented with funding from the Dutch firm Project Invest.

The company has experience implementing ecological projects in Iran, the Netherlands, Armenia, and Crotia. As soon as the project is approved, the company plans to establish a daughter organisation Ecoprojectinvest, which will be registered in Murmansk.

The commission meeting adopted a decision to send for further development with a second presentation the declaration of intent to build the wind park in Teriberka because the original has not sufficiently addressed the economics of the project, or, more importantly, precisely where the wind installations will be placed.

Growing interest for renewables in Russia
“Renewable energy sources are becoming an equitable alternative to traditional sources,” said Irina Spekman, the general director of Project Invest. “This tendency is characteristic for the global energy market, of which Russia is a part. We therefore can expect that Russia will soon join this initiative.”

Spekman added that the wind park would cut CO2 emission by 170 tons a year. “(The wind park) represents a significant investment in the solution to the problem of climate change,” she said.

Nina Lesikhina, the energy project coordinator for Bellona Murmansk said that such a high interest in the development of wind energy on the Kola Peninsula is understandable and recognises the enormous potential of the wind – 360 kilowatts per hour – as well as the availability of the exististin Kola energy system of 17 hydroelectric plants that can compensate for unstable winds.

“But large scale development of ecologically clean renewable energy, and wind energy specifically, requires a system of government support,” said Lesikhina. “Only in conditions of an effective legislative base is it possible to draw investment for the implementation of renewable energy projects.”

Lesikhina said that a raft of bills is defining government policy in the clean energy arena and mechanisms for their implementation is currently being drafted.

“We hope that these laws will ensure the profitability of renewable energy sources – after all, their environmental safety and sustainability have already been proven,” she said.